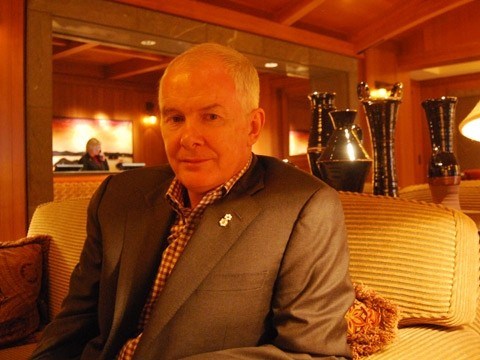 After the U.S. scored its first goal against Canada during the Olympic gold medal hockey game, René Fasel, president of the International Ice Hockey Federation leaned over to former 2010 Games boss John Furlong and said, "You know John, what this game needs is another goal."

He was right, in a way - the drama and tension that would follow could never be scripted. Spielberg would have nothing on it, and Fasel saw it coming - the shoot out, the biting of fingernails, the highest ratings possible.

Furlong, CEO of the 2010 Games Vancouver Organizing Committee (VANOC), of course, was mortified by this concept, so when the U.S. scored their second goal - and when he noticed the big ol' smirk spread wide across Fasel's face - he took a pen from his inside jacket pocket and said, "Rene, if they score in overtime, I'm going to stab you through the heart with this."

Of course, Sidney Crosby put the puck in the net, winning the game and the collective relief of an entire nation. And as Furlong recalled this event to attendees of the International Council of Shopping Centres conference at the Four Seasons on Monday, he explained why it was much, much bigger than just a puck in the net.

"Here's the thing," he said. "We're talking about this goal every minute, every day. Every time we talk about hockey, it comes up. It comes up for a reason - yes (Crosby) is a great Canadian, and who else would we have wanted to score it?

Furlong went on to tell the audience that two weeks after the Games, team Canada captain Scott Niedermayer said to him that all the players, before that gold medal game, knew that it was bigger than just hockey.

"Somehow they knew they had the hopes and dreams of a country on their shoulders. This was going to matter everywhere, and be used as an example, as a metaphor, for what's possible in our life, in our future."

Furlong - who championed the Olympic bid in 2003 and guided the process all the way through to the end of the Paralympics in 2010 - successfully shepherded a collective Canadian spirit and enthusiasm in the Olympics, which may be remembered as the largest single event in this nation's history.

It culminated, of course, in the "positive anxiety" Furlong described that peaked right before Crosby scored that final goal.

Furlong's impassioned speech to the conference detailed the trials and tribulations of organizing the 2010 Winter Games, summing up in 45 minutes the scope of his new book, Patriot Hearts , which he is currently promoting and which will hit bookshelves next week.

He spoke of adversity and how he led his team of employees and volunteers to overcome those tribulations - first, with an International Olympic Committee that had little faith that he could pull off what he had promised he could do, right through to the death of Georgian luger Nodar Kumaritashvili and the negative media attention that brought.

"I felt that was the worst phone call of my life and I'd be lying to you if I said I knew what to do," he said referring to the call about the luger's death. "I did not know what to do. I sat at my desk... I felt this was going to be an incredibly difficult time for us to come out of this and demonstrate that we had the ability to deliver the Games."

In the end, they pulled it off and, said Furlong, it was actually quite simple.

"We believed in what we were saying," he explained.

It wasn't about the medals, anyway. It was about a spirit that had been threaded from coast to coast across the country.

It was Furlong's plan to weave that thread, from the moment he was appointed CEO. It began with the 106-day torch relay and peaked with the gold medal hockey game - a perfect metaphor, in fact, for the adversity, the tension, the pay-off, the party that followed; of the entire Winter Games.

And, as Furlong stood before the audience talking about this, recalling it in front of a crowd of, oh, a couple hundred people, one could see it in his face, in the casual but firm gesticulations of his hands: that this is a man whose pride is well deserved and well worn.