2010 Olympic torch will stop in Whistler

Route communities already planning how to take advantage of opportunity
Nov 28, 2008 7:48 AM By: Clare Ogilvie 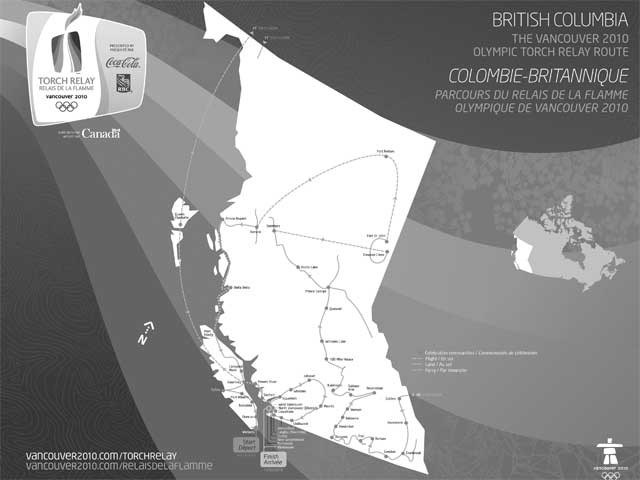 Both Whistler and Squamish will get to keep the 2010 Winter Olympic torch relay flame overnight and celebrate the occasion.

And hundreds in the corridor will get the chance to carry the flame as it makes its way up from Horseshoe Bay on its way through Pemberton to Lillooet then down through Merritt before turning back toward the Lower Mainland and the lighting of the cauldron in B.C. Place Stadium on Feb. 12, 2010 — day 106 of the torch relay.

It is likely thousands of people in the area will sign up to carry the torch, including Crazy Canuck Steve Podborski.

“I definitely want to be a torch carrier in the corridor,” said Podborski, the first North American male to win an Olympic Medal in Downhill, capturing the bronze in 1980 at Lake Placid.

“I was lucky enough to carry the torch for the (Calgary) Games in ’88 and even if you haven’t been an Olympian this gives you a feeling for what that might be like and you can share in what the Olympic dream really is.

“You come to understand a bit better just what the Games could be.

“The Games are many things to many people and… by carrying the flame you are participating and it moves you into a whole new world, so it does change you and it does change what the Games mean to you.”

During his career Podborski established a virtually unmatched record of 44 top 10 places and 20 podium finishes out of 89 downhill races run. Add to that eight individual World Cup victories, and the record leaves him ranked as one of the best ever.

Although Whistler’s torch relay celebration is very much a work in progress there are some things we know for sure.

The Vancouver Organizing Committee for the 2010 Games will role into town with its travelling road stage and technicians to help Whistler throw a great party the day the flame is due to arrive, Feb. 5.

They will also bring with them a travelling cauldron to host the flame during the celebration. Whistler will not be allowed to keep any part of the flame, despite being the 2010 Mountain Host.

“One of the elements that the (International Olympic Committee) doesn’t allow us any flexibility on is that the community cauldron has to pack up and move with us throughout,” said Jim Richards, director of torch relays for VANOC.

“We are not allowed to leave the Olympic flame behind anywhere.”

When the party is over the flame will be transferred to a safety lantern and stored overnight. The official torch will be re-lit, likely before dawn, the next day and will continue on its journey.

Richards said it is up to each community how it wants to celebrate the arrival of the torch. Local sports teams, dance troupes and other cultural elements could all be part of the show.

“This is really about celebrating the geographical and cultural diversity of all of Canada,” said Richards.

Bob Andrea, RMOW’s manager of village animation, said that plans are just starting to be made, with the first order of the day being to strike a community task force.

“It is basically a two hour community celebration and so we will have to figure out where and what sort of programming,” said Andrea.

“We want to showcase Whistler, not only the route in Whistler but also the type of entertainment and programs.”

Security around the torch, while it is in Whistler, will likely be done by local police. As the resort will be fully ramped up for the Games it is not expected that anything above those services will be needed.

Whistler’s torch relay budget for both the Olympic and Paralympic Games is $80,000 said Andrea.

“We are really excited,” he said. “Of anything that is happening this is the most feel good, warm occasion. I think everyone is going to be ignited by this flame.”

Pemberton was not chosen as a celebration community and it is Richards’s hope that the village will join in with Whistler or Lillooet to celebrate.

“We had to make a distinction at some point about where we were hosting our community celebrations,” he said.

“So while we can’t have every community host a celebration we certainly hope the communities locally would be able to participate and would be invited to.”

Pemberton Mayor Jordan Sturdy said the community is determined to make the time the torch spends traveling through the area truly representative of the culture and feel of the community.

“Not every community can be a celebration community,” he said. “But that is not to say that we can’t celebrate the event, and I fully expect that we will.

“We will work with the relay team to take this opportunity to set a route that represents what Pemberton is. Maybe part of the time it is on a horse. We will have to use our creative powers to see how we want to take part in this thing.”

Richards also said having the flame come to Whistler a full week before the start of the Games was deliberate, so that Whistler had time to celebrate the flame prior to getting down to the business of the Games.

VANOC and the two torch relay sponsors, Coke and RBC, also want lots of everyday Canadians to have a chance to carry the flame.

The sponsors control about 9,000 spots and a majority of those will be up for grabs through various contests. VANOC controls the rest and those will be handed out to partners, sponsors and suppliers for internal use, including employee incentive programs.

Both companies are running contests on their websites for those who want to carry the flame. (www.icoke.ca or www.rbc.com/carrythetorch)

The B.C. leg of the $30-million Olympic torch relay will span 27 days — or about one-quarter of the 106 days the torch spends criss-crossing Canada. It will visit 266 communities in the province and will be carried by 3,500 B.C. residents during its 9,750-kilometre journey.

More than 100 different modes of transportation will be used. VANOC CEO John Furlong said they would include plane, train, canoe, ferry, snowshoe, snowmobile, snowboard and skis.

The Calgary relay route was 17,000 kilometres and 6.6 million Canadians requested a chance to carry the torch.

Choosing the communities the torch will touch was no easy matter Furlong said recently as he addressed a Squamish Chamber of Commerce lunch.

“The most phone calls I get are from mayors of communities asking if they are going to be on the route,” he quipped.

“… If we have had one argument that has been a consistent argument all through the last year and half it has been arguments about the places we wouldn’t be able to go to, so determined is our team to try to get to every community we possibly can.”

In its planning VANOC chose a path that would allow people in almost every community in the country to drive to see the flame in an hour.

“I have carried the flame and when I had it in my hand I didn’t know what to think,” said Furlong. “It was this extraordinary feeling of responsibility, you feel the sense of awe.

“…Our goal is to not let any Canadian miss this, to not let anyone be left out. I promise you one thing, you get close to this flame and it changes you.

“So when the flame comes this way you will experience something so profound that you will talk about it for a long, long time.”

Torchbearers are required to:

• carry/run/walk with an Olympic Torch for approximately 300 metres

• find their way to and from the assigned collection point

• participate fully in the two- to three-hour Olympic Torchbearer experience

• complete all required documentation including a security check

• Go to: www.icoke.ca for a chance at 1,000 spots to be allocated between January and May. Contest participants are asked to explain what they do to live "Olympic values", including being physically active or environmentally responsible. A pool of potential winners will be selected randomly and then a panel of independent judges will select the winning entries, based upon their submissions.

• Coca-Cola has also announced 1,000 torchbearer slots will be awarded to young Canadians between the ages of 13 and 19 who sign up at www.sogoactive.com and commit to adopting an active lifestyle.

• Coca-Cola will also announce a "last chance" contest in the spring for 500 to 1,000 spots, likely with similar themes as the other contests.

• Canadians can go after one of at least 2,350 torchbearer spots with RBC by "making a personal pledge to create a better Canada." Submissions can be made at www.rbc.com/carrythetorch and winning entries will be selected randomly in April and July.

• RBC hasn't yet announced its plans for the remaining 2,000-plus spots, but they will include programs for employees, clients and community stakeholders.