Norman Rothfield may have been the oldest man on the mountain over the past two weeks, carving through Whistler-Blackcomb's powder on his 90-year-old legs.
Feb 14, 2002 8:00 PM By: Alison Taylor 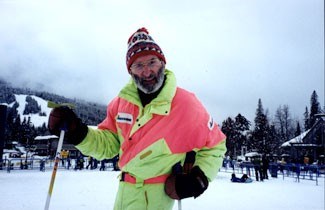 Norman Rothfield may have been the oldest man on the mountain over the past two weeks, carving through Whistler-Blackcomb's powder on his 90-year-old legs.

He was taking lessons from veteran ski instructor Doug Dixon but after 50 years on skis, Rothfield already knows a thing or two about the sport.

"I started skiing as an old man already," he said.

During his lessons, Dixon was working with Rothfield on his stance and balance, among other things.

"I've never taught anybody older. It's amazing. It really is amazing."

Rothfield was 40 years old the first time he strapped on skis and hit the snow at Mount Buller in Australia, close to his home in Melbourne.

That was half a century ago.

Over the years he has watched the evolution of skiing. Changes over the past 50 years have made the sport a different ballgame altogether from when he was a middle-aged man.

The best change to skiing, according to Rothfield, is not the fat skis, the high-speed quads, or even the gondola rides that transport skiers into the alpine.

For him it was a simple rope tow that revolutionized the sport.

"When I started there were no lifts of any kind," he said.

"That rope tow made all the difference."

He remembers climbing up the mountain on foot for every inch of his turns. Getting pulled up made it so much easier.

Clad in a neon orange and green one-piece suit, Rothfield cut an imposing figure on the mountains over the course of his holiday here.

He says he never falls now, although it has been known to happen in the past.

"I have to consider my condition," he said.

"I have to look after myself."

Despite his age, he can certainly hold his own on the mountain, said Dixon.

"Blue runs are not a big deal. If I had him on greens he'd be bored," said Dixon.

"He likes the powder but he's not keen on the bumps."

It's no wonder Rothfield stays clear of the bumps. His knees have been knocking about Australia since 1912.

Born on Jan. 26, a date later to become Australia Day, Rothfield remembers the freedom of skiing at Mount Buller when he first took up the sport.

"We would go out into the wild," he said. "At that time it was an enormous adventure."

In 1947, Rothfield spent the night lost in the snow when he got separated from his friends. He eventually found a river and made his way out the next day but not before he fell into a creek and sprained his ankle.

That mishap did nothing to dampen his love of the sport and he continued to go to Mount Buller many weekends throughout the season. He has also skied at many other places around the world.

"I came to Whistler for the first time about 10 years ago," he said.

"It suits me because although it's a long way from Australia, it's handy. It's closer than Europe."

Even at 90 years old Rothfield manages to get in about 15-20 days on the hill each year.

When asked what the secret was Rothfield said:

"Number one: choose your parents very carefully. Number two: lead an active life both mentally and physically. And number three: think of other people besides yourself."

It's apparent that good genes run in the Rothfield family.

His son Jonathan who is in his late 60s, was also tackling the slopes during their two-week vacation here, as was his grandson Daniel.

He's still not sure if he has retired yet.

He was also very active as a president at one point of the Australian Jewish Democratic Society.

As for his final tip on what has kept him young, Rothfield has been working on that over the course of most of his life.

Along with his wife Evelyn, the couple has been very active in promoting peace and human rights both nationally and internationally.

"We've been active in peace and civil rights organizations all our lives," he said.

For their dedication they were awarded the OAM, the Order of Australia Medal.

"We were elated. It's even more significant than a good ski run," he said.