A different kind of Olympian

Whistlerites return home after working behind the scenes
Mar 7, 2018 5:00 PM By: Dan Falloon 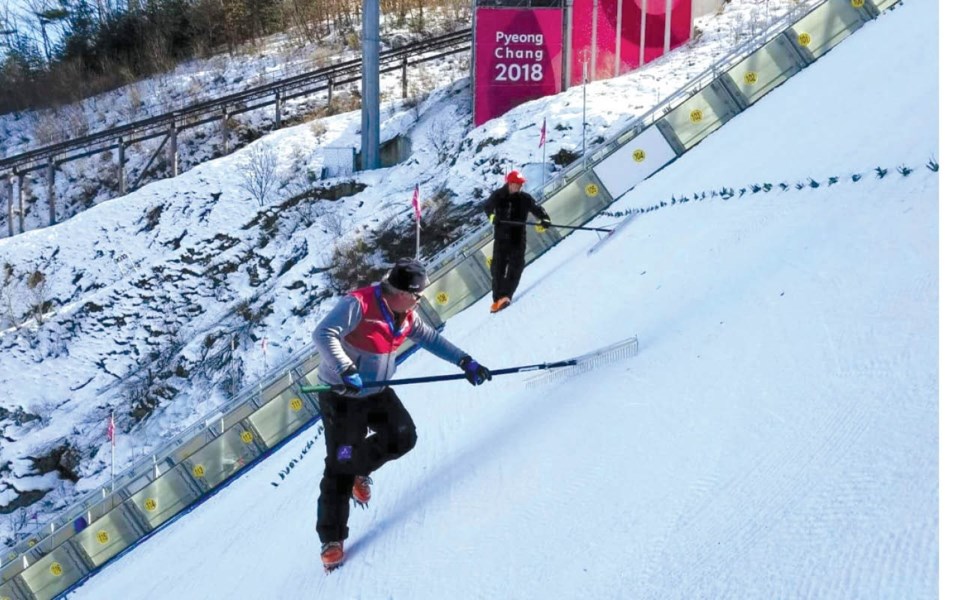 PyeongChang, South Korea looked adequately snowy during the 2018 Winter Olympic Games, but it was harder than one might think to make it look that way.

Whistler Olympic Park operations and maintenance supervisor Andreas Andresen, who went to Asia for five weeks before and during the Games to help with the ski-jump site at Alpensia Ski Jump Stadium, explained the Korean winter was not what he or other crew members were expecting,

"It was very dry and there was a lot of dust in the air sometimes. There were winds coming in from the Gobi Desert. We were expecting white, pristine snow and it started to show up very dirty," he said.

Andresen went over with a small Canadian crew working alongside an American and a handful of Norwegians. The group was now working its third Olympics after previously helping with the ski-jumping courses in 2010 at Whistler Olympic Park and 2014 in Sochi, Russia.

Andresen's responsibilities included shaping and maintaining the hill after the snow had been made by Canadian and Norwegian groomers.

"We provide, really, a lot of labour shaping, packing, surveying the hill, measuring the hill to make sure that it's equal density and really perfectly level," he said.

Andresen said the goal was to create a venue that would stand up to repeated jumps while also being safe for jumpers. In roughly 3,800 jumps, he recalls only three falls.

"It's very important that the hill can sustain the impact, but it also provides a safe environment not only to ski on, but in case of an incident," Andresen said. "Everything came out beautifully."

Since there were a number of events within the vicinity of the ski jump, Andresen got the chance to check out plenty of the Olympic cross-country action.

"I probably saw more Olympic events, mainly cross-country, than at any of the other Games. I really enjoyed that," he said.

As well, Andresen attended the opening ceremonies. While cold, it wasn't overwhelmingly so for the native of Sudbury, Ont.

Working just to the south of Andresen at Alpensia Sliding Centre, Robb Zirnhelt, the track operations manager from Whistler Sliding Centre, had worked on the Korean site for about two years to help get the track up and running. He was in attendance for the first runs down the track and also helped with some troubleshooting to get it in tip-top shape.

"The ice gets dehydrated when there's that really low humidity. You have to pour water on it just to maintain that integrity of the ice," he said.

It's an issue that Zirnhelt doesn't have to deal with often here in Whistler, and he added that he was expecting more similarities between the Canadian and Korean regions than there actually were.

"It's only about a half-hour drive, 40 minutes from the coast, so I was thinking that we would have similar conditions to what we have here in Whistler. It turns out that it's actually fairly dry there in the winter," he said. "We were learning on our feet, too, as to how the ice would react to the changing weather conditions. When I first got over there to prepare for the Games, we were having days where the high was minus-five and the lows overnight were in the minus-20s. It changes a whole lot of how you approach the ice maintenance."

Current Whistler Sliding Centre employees Mike Lambert and Adam Taber joined Zirnhelt in PyeongChang, while former crew members Reid Nelson and Max McArthur joined the Korean team working there since September. The crew also featured Russians, Austrians, Australians and Americans. Though Zirnhelt noted his Russian is gradually improving, the main way of getting around language barriers is through sign language.

As well, the sliding sports were an area of focus from the Koreans coming into the Games, as Sungbin Yun won gold in men's skeleton and the Korean sled placed second in four-man bobsleigh, The crowds were there, which helped drum up excitement.

"The Korean locals were supporting the venue, so we had good turnouts for crowds. That was something I think they were having challenges with at some of the venues. It was great to be putting on a successful event," he said.

While Zirnhelt worked each of the roughly 40 days he was in South Korea, he had the opportunity to take one evening off to check out the short-track speed skating finals.

"That was pretty cool for me because I come from a short-track speed skating background," he said.