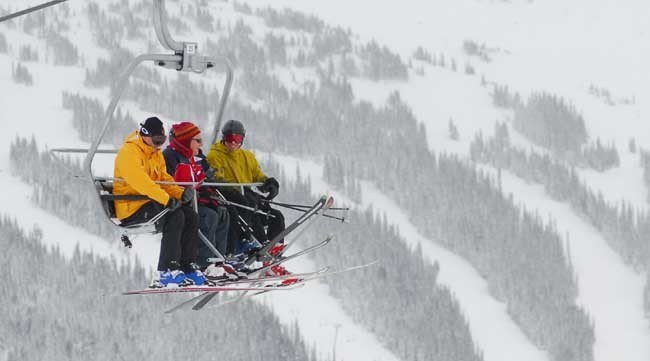 Jut three of 7,000 skiers and riders that hit the slopes after storms left behind record November snow fall. Photo by Ian Robertson, www.coastphoto.com

While much of the Lower Mainland is still with undrinkable water after rain and wind battered most of B.C. last week, Whistler rebounded quickly from power outages — with the added benefit of a record dump of snow.

More than 300 cm (10 ft) of snow has fallen in the first three weeks of November, breaking the 1994 record of 272 cm in one month, according to Whistler-Blackcomb.

“The change in weather patterns should put an end to the very active storm cycle we’ve had,” Steele said.

The storms led to one of the best opening days in years Saturday on Whistler Mountain, with an estimated 7,000 skiers and boarders enjoying the first turns of the season.

With six lifts in operation more than 1,000 acres of terrain were open for those keen to get back on the boards. Some arrived as early as 4:30 a.m. to get first tracks.

“We had a big day for our first day of the season,” said Christina Moore, public relations and communications manager for Whistler-Blackcomb. “We had about 1,000 staff members on the mountain and approximately 6,000 guests.”

Whistler Mountain has been operating daily since Saturday, with access from the village and Creekside. Mid-mountain lifts in operation this week included the Emerald, Red, Garbanzo and Franz’s chairs.

Blackcomb will open for the season today, Nov. 23, in time for the U.S. Thanksgiving holiday.

Whistler-Blackcomb is planning to open the Glacier Express chair on Blackcomb Friday and have Whistler Mountain’s Peak Chair running on Saturday.

While anticipation of the ski season has been palpable in Whistler for the last week or two, Moore said stories about Whistler in last weekend’s New York Times, Globe and Mail and Vancouver Sun newspapers should help fuel interest and skier visits this weekend and for the rest of the winter.

In the valley, Whistler experienced some power outages last week but it was business as usual for many local companies and government departments.

“If it looks like (a power outage) is going to run into a few days we’d start up the generator for fuelling buses and running radios,” Pass said.

Tourism Whistler decamped from its central village offices to the Telus Conference Centre for the duration of the mid-week power outage, managing to surpass 2005 sales records by 78 per cent, according to the marketing organization’s spokesperson Breton Murphy.

“They were able to move forward without missing a beat,” Murphy said. “With the kind of curve ball that was thrown, for the team to be able to respond effectively and come up with a solution was extraordinary.”

“That last storm was kind of a funny one,” Ahola said from his Vancouver office. “The extent of it was from Horseshoe Bay to Porteau Cove, but further north there was just heavy rains so crews there kept on working.”

“We’ve had a relatively light time of it — I’m finding lots of wood to knock right at the moment,” Sander said.

Power problems in Whistler were all repaired within two to three days, B.C. Hyrdo’s Elesha Moreno said, adding that Whistler residents have a matter-of-fact approach to outages.

“Whistler is a really great area for that,” she said, “because they are so immersed in nature they are pretty patient when we deal with these types of things just because there are trees everywhere.”