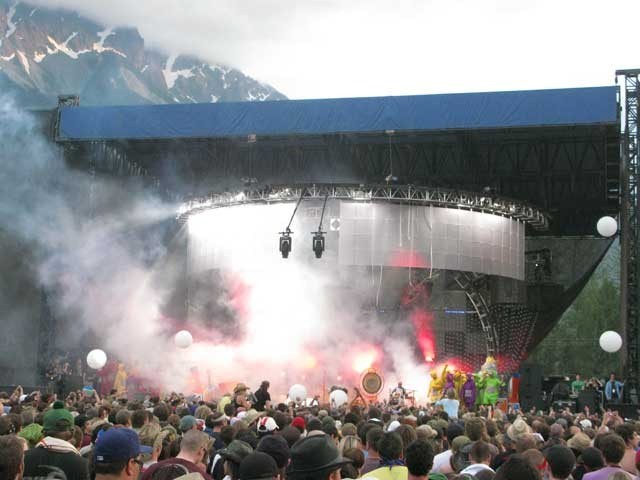 Flame On With the Pemberton Fest given a ten-year lease on life, leisure and libido, acts like the Flaming Lips could become corridor denizens. Talk about booya.

It’s official — the Agricultural Land Commission has OKed the Pemberton Festival for the next decade.

Commissioners with the ALC’s South Coast Panel, which deals with land use in the Sea to Sky Corridor, approved at a Nov. 18 meeting a non-farm use application to use the site once a year for 10 years.

The commissioners wrote in a Nov. 25 report that, “with proper pre-event and post-event reclamation efforts,” the agricultural capability of the festival site will “not be diminished.”

“I’m thrilled that it’s finally come down,” said Pemberton Mayor Jordan Sturdy. “I’m glad to see that we have approvals in place for a longer period of time to provide some certainty for the future.”

The commissioners did, however, attach a few conditions.

In approving the festival for a period of 10 years, they asked that the proposed uses for the festival be restricted to the boundaries in the application; that “parking facilities and other amenities” be prohibited on other ALR lands; that a professional agrologist be retained to help mitigate soil damage and report on post-event cleanup.

They also asked that a $250,000 letter of credit in the Commission’s favour be submitted one month prior to the event to ensure the land is reclaimed for agricultural purposes. They claim the funds will be used to reclaim the land, resolve any “reclamation deficiencies” and secure advice and a “closure report” from the professional agrologist if organizers default on the festival.

None of the conditions phased Sturdy.

“It’s all the things that we expected to see,” he said. “Just the monitoring, the enhancement of the agriculture, preserving the agricultural capacity of the property, we were quite confident that we were able to retain that.”

The commission has also asked that the Village of Pemberton and the Squamish-Lillooet Regional District come into a memorandum of understanding with the ALC that will outline expectations, roles and responsibilities relating to the festival, as well as commit all parties to explore and enhance agriculture in the area.

The ALC wants the MOU to be completed or executed on or before July 1, 2009. Once that happens, festival organizers Live Nation will be permitted another three years to hold the Pemberton Festival with the possibility of two more extensions of three years each, according to the report.

The ALC needs a commitment from LiveNation that they will take a “No Footprint” approach to the festival so that all facilities, structures and equipment will be removed from the property following every annual event.

“The existing condition of the properties as of the date of this decision form the baseline for subsequent events and the level to which Live Nation must comply with this condition,” the commissioners wrote.

The VOP, the SLRD and LiveNation were also asked to continue dialogue with the Mount Currie Band of the Lil’wat Nation to address “non-agricultural concerns” by the band council and its members.

The Mount Currie Band conducted a survey among its members after this year’s inaugural event and noted a number of issues, including traffic, fire safety and security.

Band member Ruth Dick told a September public meeting about the festival that she had concerns about the presence of drugs and alcohol.

Festival organizer Shane Bourbonnais tried to assuage her concerns by saying he would speak to Mount Currie council about any issues related to the festival later that month.

The festival, which took place July 25 to 27, brought 40,000 spectators to Pemberton to see bands such as Nine Inch Nails, Coldplay and Tom Petty.

Though the ALC has made its decision, the festival itself still has to be organized. Bourbonnais has noted in previous stories that there is a tight timeframe for organizing the festival. He could not be reached for comment.