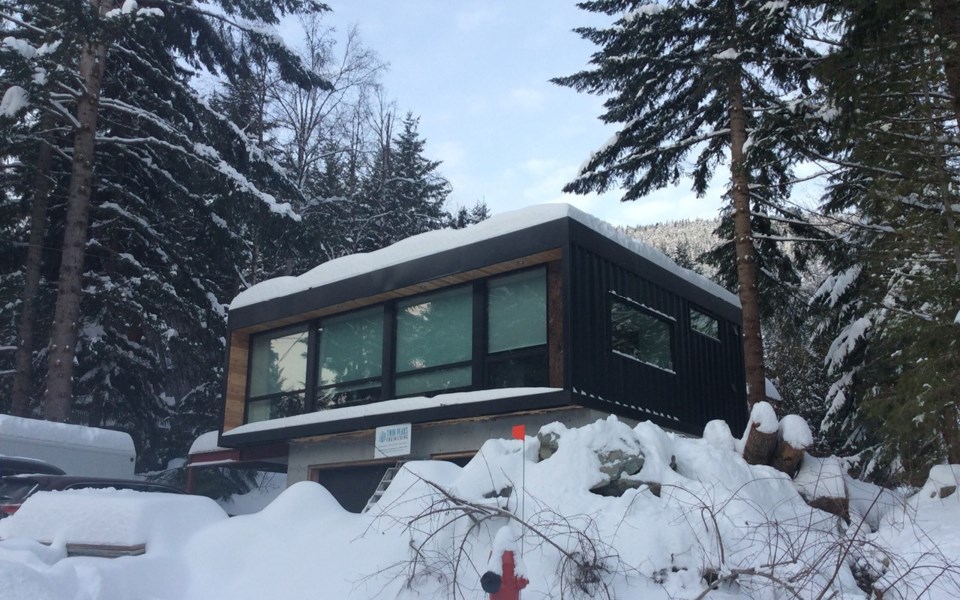 Pre-Fabulous A fully functioning home in Alpine fashioned out of a shipping container. Photo submitted

Residents of Alpine Meadows may have noticed a curious addition to their neighbourhood lately — a large steel structure that sits atop a two-car garage on Matterhorn Drive.

Made from the frame of a shipping container, the structure is, in fact, a fully functional home, boasting two bedrooms, a bathroom, and a kitchen.

Owner Mac Lowry said going with a pre-fabricated home made sense given the difficulty of finding a builder in Whistler.

"It's really challenging to get contractors and people lined up, especially for a project this size. So basically it was timeline and cost certainty," he said.

Lowry and his partner "pulled the trigger" in mid-August, and the unit arrived by the start of October — a quick turnaround Lowry is grateful for.

The home was manufactured by Honomobo, a B.C. company that wants to shatter people's impressions of modular homes. Boasting sleek, minimalist interiors and large bay windows, it's not the kind of thing you'd see in an episode of Trailer Park Boys.

"The modular industry has traditionally served the mobile home market," explained Devon Siebenga, Honomobo's president. "(But) there's a bit of an evolution going on in terms of the quality of product that's being produced."

Since launching a year and a half ago, Honomobo, which builds the units in Alberta, has been featured in the Globe and Mail, popular housing websites like Curbed, and in a segment for HGTV.

The units can cost between $100,000 and $300,000 and can be stacked on top of each other, creating additional space. While last year the company manufactured around 20 homes, this year they plan on doubling that amount.

Shipping containers provide a strong and durable frame for a home, explained Siebenga, pointing to the Matterhorn unit as an example. In October, when it was being installed, a nine-metre tree blew over and landed on it during a snowstorm. According to Lowry and Siebenga, it didn't even leave a dent.

Vancouver, Siebenga said, represents a huge potential market, but is "filled with a lot of red tape" that has inhibited business. While it has allowed for the construction of laneway homes, to get proper permitting takes around a year, said Siebenga.

"We've had a ton of interest (in Vancouver). But as soon as people start walking down the road and figuring out how long it's going to take, they're like 'not worth it.'"

Siebenga sees big potential in Whistler, which he says is taking a more proactive approach. A principal recommendation of the Mayor's Task Force on Residential Housing — a recent report that seeks to guide the municipality's goal of creating 1,000 resident-restricted beds in the next five years — is to encourage infill housing, meaning the construction of additional units on a property.

Matterhorn Drive is already zoned to allow it, and town planners are currently drafting regulations to encourage infill housing throughout the community.

"We are expanding the area to all neighborhoods — not just Alpine Meadows," explained Mayor Nancy Wilhelm-Morden.

"We're looking at ways to encourage residential neighbourhoods and owners to think about doing this."

But just how enthusiastic neighbours feel about modular homes being added to their neighbourhoods has yet to be seen.

Allowing infill housing in Alpine Meadows has proven controversial. Last year, a Whistler family that moved to Alpine with the express interest of building an infill unit was shut down over a minor variance requirement and opposition to the unit, which would have been governed by the Whistler Housing Authority.

"I listened to the neighbours who spoke about it, and some of them were very compelling as far as what they thought it would do to privacy, to views, to additional traffic in the neighbourhoods," said Wilhelm-Morden, who voted to kibosh the project, saying she wasn't a big fan of the infill housing policy in an interview with Pique at the time.

Wilhelm-Morden is now getting behind the expansion of the program, seeing it as a sound way to add housing units to the community.

Things, she said, have changed: "I think the community has recognized that we do have housing issues and that it's a community-wide responsibility to address the issue."

New units will bring more people and cars, noted Wilhelm Morden, concerns that "have to be balanced" against the increased density they bring.

As for the rents?

"The thinking for infill housing is that one of the units will not necessarily be (rent) controlled... nor (will it be) flat out rental rates... but again these are the type of details we haven't worked out yet," she said.

The Matterhorn Drive unit, however, is not rent controlled. When asked how much it will run for a month, Lowry declined to say.

Having the ability to build it and gain an additional income, however, was a big factor in the family's decision to move from Vancouver to Whistler. "It's the reason we bought the property," he said.