Americans welcomed to Whistler with fireworks 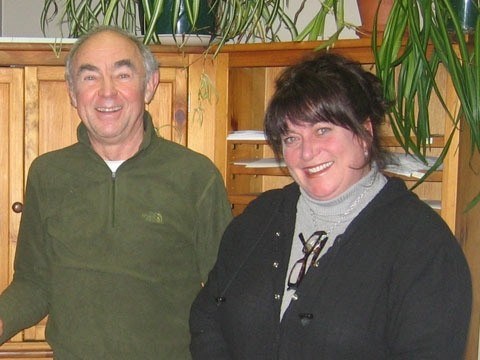 American-born Rod Rohda and his wife Lori fell in love with Whistler the first time they came to visit 12 years ago.

The loved it so much they bought a home here on their second visit.

They come now for about six months every year - throughout the winter and the summer months - and are part of a small group of Americans who call Whistler their home away from home.

They, like other Americans, care about this community so much that they play a critical role in making it a better place through the American Friends of Whistler (AFOW). The charitable organization has raised $772,000 in the past eight years, the money filtering out to Whistler organizations, making a difference on the ground in the community.

"They (the American Friends) have come to have a real affection for Whistler and this gives them an opportunity to give back to, I would say, their second home, and make a difference for the general well being of the community," said Rohda, president of the AFOW, from his Boston home.

The low-key organization has become the symbol representing the deep roots between Whistler and its American guests, and those countrymen who see themselves as more than guests.

Tourism Whistler confirmed this week that American Thanksgiving weekend is looking strong this year - trending in the week leading up to the long weekend to be busier in terms of overnight visits than last winter and the U.S. continues to be a key market for the resort.

That importance is evident too in the first ever special fireworks display set up for the American Thanksgiving weekend on Thursday, Nov. 24 at 8 p.m. at the base of the mountain at Skiers Plaza. It is part of the municipality's Whistler Presents program. The funding for the whole weekend, to kick off the winter season, is coming from the RMI (Resort Municipality Initiative) funding - grant money from the province to grow tourism in the resort. The budget for the weekend's programming, which also includes a special concert for 1,000 people at Olympic Plaza featuring Loverboy and Trooper, is budgeted to cost $125,000.

"Certainly it's a time of year that we want to continue to build incremental visits," said Michele Comeau, communications manager with the Resort Municipality of Whistler. "And not only that, we want to make the experience for the visitors who already have plans to come here, to make their experience that much better."

When Rohda first came to Whistler more than a decade ago, Americans, particularly those in the Pacific Northwest, were coming in droves, enticed by the low Canadian dollar.

"With the rise in the Canadian dollar and significantly the cooling of the American economy, it certainly has made things more challenging," said Rohda. "But fortunately we have developed a loyal donor base."

Roughly 60 to 70 individuals donate each year and about three-quarters are repeat donors. That, said Rohda, is reassuring.

And Whistler would likely be a different place without those contributions over the years said Doug Forseth, Whistler Blackcomb's vice president of planning, government relations and special projects.

"You take that $800,000 out of play and there would be a few voids that they've filled that would be pretty noticeable potentially," he said.

The Montana-born Forseth, who has lived in Canada, Whistler primarily, for the past 25 years, was part of the group that first talked about forming the AFOW, along with former Mayor Hugh O'Reilly, another American, and Jeff Harbers, a retired Microsoft executive who died in a plane crash in 2006.

"I totally believe in the concept," said Forseth.

Now Whistler Blackcomb plays a role too, putting on a "ski with a pro" day for the AFOW. About 25 to 30 members come out for that annual day to feel connected to other Americans and to Whistler.

"That's part of the networking, and having a place beyond the physical place you live in, but having a space for where you have connections," said Forseth.

The AFOW is made up of individuals who by and large own property in Whistler but live in the United States.

This year $150,000 from the AFOW is going out to the community, the bulk ($117,000) of which has gone to the Whistler Adaptive Sports Program (WASP) for the Jeff Harbers Adaptive Sports Centre at the Olympic Station on Whistler Mountain.

A further $14,000 is going to the Whistler Museum to help improve their storage facilities so artifacts don't get ruined over time.

And $10,000 is going to the Whistler Community Services Society (WCSS) for its Food Bank and SNOW (Support Network of Whistler program).

"We're extremely grateful for the ongoing support from the American Friends of Whistler," said Claire Mozes, program manager of Outreach Services at the WCSS.

The AFOW has given to WCSS several times over the years.

"These ongoing donations make all the difference," added Mozes, noting that Food Bank numbers have skyrocketed in recent years.

Rohda said just 2.5 per cent of all donations go towards administrative costs. That means 97.5 per cent goes directly to the charities.

"Any Americans who contribute to the AFOW are able to take that as a charitable donation on their U.S. income tax," he added. "That is certainly an appealling feature."

The Inside Scoop, the AFOW annual get together, will take place on Thursday December 29 from 5 to 7 p.m. at Millennium Place - a chance to get the behind the scenes information from community leaders.

To learn more go to www.afow.org.