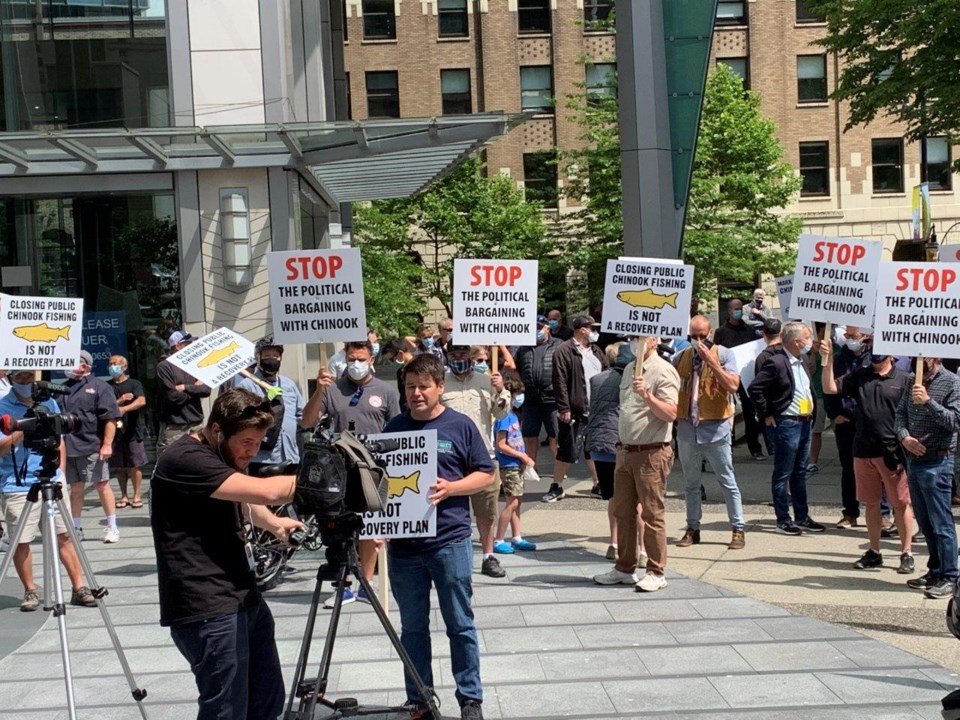 A rally was held in Downtown Vancouver this week after Fisheries and Oceans Canada (DFO) put restrictions on Chinook fishing on the South Coast, a decision anglers—and one of the department’s own biologists—say wasn’t based in science.

The Public Fishery Alliance-led rally was held Monday, July 6, in front of DFO’s Burrard Street office as a way to bring attention to last month’s announcement that Chinook retention would remain closed for the majority of the South Coast and Vancouver Island until either July 15 or Aug. 1, depending on the area. Between Aug.1 and 31, one Chinook between 62 and 80 centimetres is permitted for retention, while portions of Howe Sound, the Southern Gulf Islands, Vancouver Harbour and the mouth of the Fraser River will be prohibited, even to catch-and-release, until Sept. 1.

The DFO says the measures were taken to protect Fraser River Chinook, whose populations have been in decline for years as a result of a number of factors, including habitat destruction, harvest and climate change.

“Chinook coastwide have been struggling for quite a number of years now and this is something that isn’t specific to the Fraser. There’s been a broad pattern of decline basically from California to Alaska,” said Jennifer Nener, salmon director for the DFO’s Pacific region. “With that, we’ve also seen a decline in body size and that means that each female that comes back to spawn is going to produce fewer eggs. So there are a number of factors coming together, and with the very low returns and these others things, we really needed to take some actions to try and protect these stocks as much as possible and get as many spawners to the spawning grounds as possible.”

Of 13 wild Fraser River Chinook populations analyzed, only one is considered not at risk by the DFO, but that assessment fails to paint the whole picture, according to Jason Assonitis, owner of Bon Chovy Salmon Fishing Charters.

“Thirteen Chinook stocks are endangered or threatened, and that seems to be used over and over again. What they’re not saying is that on east Vancouver Island, as an example, over the last three years, the Cowichan, the Puntledge, the Campbell, some of these big systems are having near-historic highs. So you’ve got these 13 Fraser Chinook populations that are not doing well … and the run size for those populations may be 40,000 to 50,000 total spawners, but you’re putting it in a pool of a million other Chinooks, so it’s a very small portion but has been coined as being a problem everywhere.”

Both sportfishing and conservation groups have criticized the decision as more politically than scientifically motivated, noting that if the DFO was so concerned about the health of Chinook, it would not have allowed commercial and First Nations groups to continue harvesting salmon. First Nations in the area have been given priority access for food, social and ceremonial fishing of mixed stocks in South Coast waters with the exception of the approaches to the Fraser.

“Broadly, the BCWF is concerned the public fishery has been marginalized, with science taking a back seat to political agendas,” read a June 26 letter from the BC Wildlife Federation to federal fisheries minister Bernadette Jordan. “Specifically related to the latest round of regulation changes, our concern is DFO has imposed Chinook closures on public fishing under the guise of conservation. If extreme conservation concerns are truly the issue, then all fisheries, including commercial and First Nation [food, social and ceremonial fishing], should be curtailed.”

For its part, Williams Lake-based Tŝilhqot’in Nation has welcomed stronger regulations on Chinook exploitation from the DFO, but said the measures recently put in place aren’t enough to reverse the population’s decline and mitigate the risk of extirpation.

“We are pro-actively exploring strategic emergency enhancement approaches and will work with our partners to implement management measures to mitigate extirpation risk and facilitate rebuilding and recovery,” read a July 1 release from the nation calling for an “immediate meeting” with Minister Jordan. “The only way to meaningfully address this is to work together, based on the recognition of our Title and Rights, and our common interests.”

Whatever the underlying motivation, it would appear at least one of DFO’s own biologists agreed the Chinook closure was not entirely based on science. In an email last month that went out to dozens of sportfishing advocates, a senior DFO biologist for the South Coast wrote, "As you guys point out the decision making process at senior DFO levels obviously did not rely solely on scientific data or advice.”

Nener said everyone will interpret the data differently, but it’s her belief that the closure was “very much” a science-based decision.

“I’ve seen the information, and when you have the kinds of very low numbers of spawners we’ve seen in the last few years, you have a choice of how you’re going to respond, and I think the view is always to take a precautionary approach,” she said.

A major frustration of recent years for sportfishing and conservationist groups is the lack of what they see as a comprehensive management and recovery plan at the DFO for Fraser River Chinook. Local angler and Squamish-Lillooet Sportfish Advisory Committee member Dave Brown said he and Assonitis met with then-fisheries minister Jonathon Wilkinson last spring to discuss “the importance of taking meaningful action addressing water-extraction issues in the habitat where these stocks of Chinook concern are.

“The number of these fish are so low that hatchery enhancement is going to be one of the tools needed to recover these stocks,” Brown added, noting that they even brought a proposal to Wilkinson on behalf of the Spruce City Wildlife Association to increase funding for hatchery enhancement in Prince George.

“The issue was totally ignored,” he said.

Brown also pointed to 23 chinook gillnet openings that have been allowed to go ahead on the lower Fraser River this year as a sign that conservation is not the main priority at the DFO.

Nener said the department is doing as much as it can to effectively manage and conserve Chinook, “but it’s not just a DFO issue.”

“I really want to emphasize that DFO can’t do this alone; it’s going to take a collective effort with other levels of government, including First Nations, the province and local governments,” she added. “We’re all really going to have to work together, and the people of B.C. as well, to do what they can for these fish.”

This is the second summer of restrictions on Fraser River Chinook after the DFO relegated the public fishery to catch-and-release last summer. Assonitis believes the closures will only serve to erode the Canadian public’s longheld connection to salmon.

“I think what this is doing is breaking down the sinews that tie the public to salmon. People are super frustrated because they know there are options and unfortunately they don’t matter enough to continue a tradition that’s been tied to B.C. for over 100 years,” he said. “Fish are being used as a currency and a chess piece. In turn, it will destroy the public’s tie to salmon and it will destroy people that rely on a public fishery to make their living.”