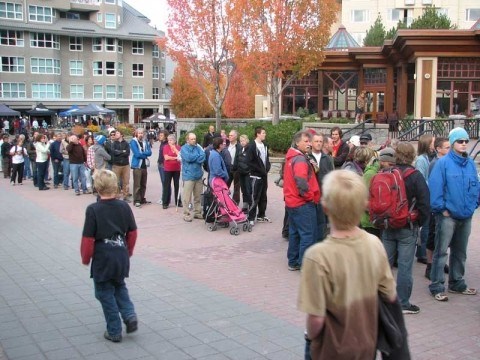 Even though crowds flocked to Whistler Blackcomb's annual Turkey Sale this weekend, most shoppers were careful with the money they spent on ski and snowboard gear.

This week David Brownlie, president and COO of Whistler Blackcomb, said the company's sales were down compared to 2008, despite the fact that a record number of people packed into their building in the Upper Village.

"People are a little more careful," said Brownlie. "They are clearly looking for value, but they also know they want to go skiing and snowboarding this year, and they need a couple new things to get ready for the winter."

Brownlie couldn't say exactly how much product Whistler Blackcomb sold between Oct. 9 and 12, but the company's revenue was "a bit off."

The biggest sellers inside the 20,000 square foot retail space were outerwear, ski boots and helmets.

Despite the low revenue, though, Brownlie was pleased with the high traffic throughout the village during the weekend.

He said the village was the busiest he had ever seen it on a Thanksgiving weekend and Whistler Blackcomb saw a record number of people on the mountain and in the bike park.

"I think it shows the regional traffic will be strong (this winter)," he said.

Brownlie also said the results from Whistler Blackcomb's Early Bird season pass sale are ahead of last year. The sale, which closed on Oct. 12, offered season passes for $1,099, the lowest price point in a decade.

"The numbers are extremely good," said Brownlie. "We had a good reaction to the pricing."

Meanwhile, the Whistler Mountain Ski Club enjoyed record-breaking sales inside their tent, which was stocked with used ski and snowboard gear along with new apparel.

Dennis Perry, the club's SWAP (Sale With Awesome Price) director, called the weekend sale "an incredible success," adding their net revenue was up 50 per cent compared to last year.

More than 2,000 pieces of equipment were checked into the SWAP, and more than 1,000 pieces sold, he said.

Perry attributes three factors to the club's high revenue this year: great weather, high quality inventory, and people looking for a bargain in the tough economy.

He said Thanksgiving weekend is usually Whistler's first big indicator for how busy the upcoming ski season is going to be - and based on SWAP's results, he believes Whistler will have a lot of skiers this year.

The ski club uses money raised through the sale to support their juvenile ski-racing program. They charge a $3 tag fee for each piece of equipment checked into the sale, along with 20 per cent of the final sale price.

The club also gets a 15 per cent commission for revenue generated in their apparel tent, which was stocked by Wild Willies, Snow Covers, McCoo's, and the Whistler Golf Course.