Another tough year for Whistler's glaciers 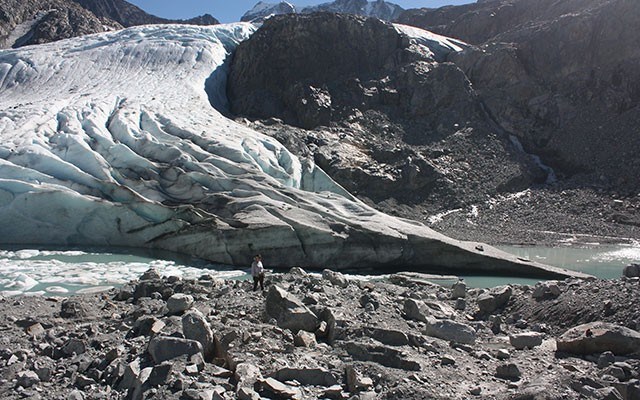 melting moments The unusually warm summer of 2015, coupled with a less than normal snowpack this winter, has generated near-record recession of our glaciers. Photo BY Dave lyon

After Labour Day, the annual re-survey of Wedgemount and Overlord Glaciers took place — Year 43 for the former and Year 29 for the latter.

Doug Wylie and Marilyn Cram assisted on Overlord, beginning with the long trek over the Musical Bumps to Singing Pass and the final grunt to Russet Lake in a six-hour journey.

Late in the afternoon, the descent to the snout of the glacier provided a few unexpected results. The terminus was no longer fronted by a massive dead ice zone, blanketed with rock debris, which had confused the last three or four surveys. Its bilobed configuration was gone, leaving only the southwest snout.

Only a minor hint of the northeast tongue remained. which was backed by a thin layer of ice collapsing onto the smooth bedrock beside and underneath it. The much thicker southwest tongue, however, had receded 19.8 metres over the year.

Usually there are fresh goat tracks in the mud along the edge of the ice, but there were no signs, fresh or old, of their presence this year. However, on the following morning we saw a lot of wildlife in the hike out to the village on the Singing Pass Trail.

Later in the week, a larger entourage of helpers sprinted up to Wedgemount Lake.

The spark plug of the re-survey of its glacier in recent years has been Dave Lyon, the son of Don Lyon who was a key cog in the surveys of the 1970s and early '80s.

It is now a three-generation family as Dave's son, Graham, was also present for his fourth trip to the glacier.

He brought four of his Grade 12 friends along to make a video of the re-survey. The enthusiasm of the crew was evident upon arrival at the snout of the glacier.

Recession of ice over the year provided a widening iceberg-strewn pond between our marker cairn of 2014 and the ice edge.

How was the recession from 2014 to be measured? By triangulation, or with a direct tape measure? The group wanted to try the tape, with Marilyn and Pierce stripping down and swimming around a small slab of floating ice to the glacier margin with the end of the tape in their teet.

The tape read 28.6 metres of recession — three metres more than the previous year.

The day finished with another of Graham's friends skipping from iceberg to iceberg in a dazzling display.

Meanwhile, overnight campers were arriving, and by the time we returned to the old hut near the far end of the lake, 18 tents had popped up. A reducing glacier has tourist appeal.

The unusually warm summer of 2015, coupled with a less than normal snowpack during the winter of 2014-15 has generated near-record recession of our glaciers. Only the 1930s saw greater retreats — the era of the dust bowl.

The elevation of the transition zone from snowline to bare ice emphasizes this demise. For Overlord this "equilibrium line" is at the upper icefall, roughly 2,350 to 2,400 metres in elevation; for Wedgemount, it is higher yet on its upper icefall at roughly 2,700 to 2,750 metres.

As for the elevation of the snout of each, Overlord hasn't changed much since we began surveys in 1986, whereas an upper Wedgemount Lake is now developing at a full 50 metres above the main lake basin (1,860 m), which was the seat of the glacier for about 100 years or more before retreat from the lake in 1991.

Perhaps the recession will ease off now that the scam on automotive emissions will face the courts.

Ricker is a member of the Whistler Naturalists, a non-profit group dedicated to increasing local knowledge of the natural world in the Whistler area.

The Naturalists are looking for volunteers to help organize upcoming events and write Naturespeak articles. For more information please contact Kristina at kswerhun@hotmail.com or visit whistlernaturalists.ca.