Meeting organized by opponents draws about 200 Squamish residents
Apr 16, 2010 7:04 AM By: Gagandeep Ghuman 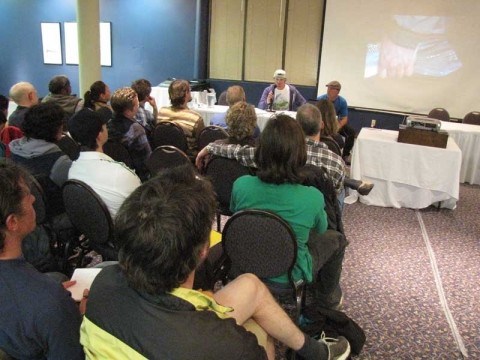 There's nothing in Squamish that unites - and divides - like Garibaldi at Squamish (GAS), the proposed four-season ski and golf resort at Brohm Ridge.

That unity and division came to the fore as 200 residents gathered Monday at the Sea to Sky Hotel to debate how the proposed resort would affect Squamish. The meeting was organized by members of Save Garibaldi, a group opposed to the resort proposal.

The opponents came armed with a battery of documents, hydro studies, Squamish Nation members, a professor and a geologist to make a point they have made repeatedly over the years: whichever way you slice it, GAS is bad for Squamish.

As for the supporters, there were a few but they were easily recognized by the "Friends of the GAS" badges they wore on their lapels. They shifted nervously in their seats and at the final question-and-answer session only one of them spoke for the jobs that GAS would bring. Minutes after he started speaking he was shouted down.

"This (GAS) is going to create economic benefits and I want to stay in Squamish. I want this to be a town where my three kids can grow up and stay here and work here," Richard Tripp said.

All across the province people are moving out of small towns because of lack of jobs, but Squamish has an opportunity to create jobs with the proposed resort, Tripp said.

Like several others in the audience, Jessica Reid disagreed.

"There are thousands of units that have already been approved in the District of Squamish. We also have the Oceanfront, which is a massive 20-year build out that's going to provide construction and retail jobs. It's already in our district," said Reid, a member of Save Garibaldi.

The impetus for Monday's meeting, however, did not come out of a concern for jobs. It came from a letter written in December by the Environmental Assessment Office to GAS highlighting "inaccuracies" and "inconsistencies" in its latest reports, Reid said.

Among these inconsistencies, she said, are two new 50-metre dams to be built on terrain that consultants had previously deemed too hazardous to build on. Then there is the downstream footprint of the dams, which the EAO says has been underestimated in a report from GAS consultant Enkon. The letter also states that the risks and hazards of a debris slide have not been assessed by the proponents.

She said Brohm Ridge is a hazard area for landslides, the project messes with the animal habitat, there's just not enough water to support it and if the proposed resort is brought within Squamish's boundaries it would contravene the district's own small growth plan.

Others who took to the podium raised similar concerns.

A hydrology study of the area was provided by Rob Millar, a professor of hydrology at University of British Columbia. Millar said there is a minimum flow threshold that is required for the downstream fish habitat to survive.

"In a normal year, there's probably enough flow to satisfy downstream conditions and divert enough to meet demand. But in a dry or low flow year, that ability might be compromised." he said.

Scott Baker from the Steelhead Society of British Columbia said the resort will have a damaging effect on the steelhead habitat in Brohm Creek. He said the diversion of water for consumption would make the stream exceptionally fragile and susceptible to pollution impacts.

But all the environmental concerns are not enough to deter GAS supporters like Jeff Lavine. He said there are a lot of people who support the project but don't come out for fear of losing business from patrons who oppose GAS.

But Lavine, like several others in the room, also expressed hope that there might be some middle ground for the opponents and proponents to sit together and sort out their differences.

But that middle ground, at least for now, is as invisible as GAS in a room.