Problem compounded by other construction slow-downs
Feb 27, 2009 5:41 AM By: Paul Carlucci 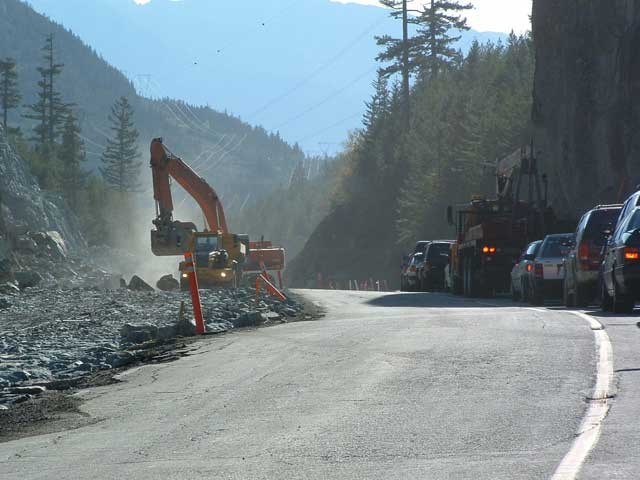 The Machines Stop With Kiewit winding down, construction slowing and nothing much on the horizon, employment worries are growing.

Less than a month ago, spiffed out in a hardhat and waxing an assured grin, B.C. Minister of Transportation and Infrastructure Kevin Falcon stood on Doodson's Corner and announced the 80 per cent completion of the Sea to Sky Highway Improvement project.

It was, he said, on time and on budget, worth every penny of the $600 million it cost to overhaul the treacherous features of the old road, which has been augmented by reflective markings, more lanes and gentler corners.

"The project is on time and on budget," said Falcon in a press release. "The new highway will be safer, more efficient and reliable, and will provide economic opportunities that benefit communities along the Sea to Sky corridor and the entire province."

That the highway represents an economic opportunity is not much disputed. Aside from the obvious Olympic benefits, closures due to accidents are expected to decrease, and with that comes better connectivity between Whistler, Squamish and the markets of the Lower Mainland. And with that connectivity comes increased travel through communities, like Horseshoe Bay, Britannia Beach and Squamish, which has the largest fixed population north of West Vancouver.

At the same time, the completion of the project will represent an economic loss. Since 2003, Peter Kiewit & Sons has worked on the highway. The peak of construction came in 2007, with 800 employees in the field. Two years later, with Falcon's announcement, that number has fallen to 500.

Necessarily, these workers, as well as the company that employs them, have an impact on the corridor, whether through the purchasing of property, the contracting of supplies or the crowding of pubs.

Of those who make economic development their business, some are worried over the fallout of a completed project, especially when combined with other market events, like the general construction slowdown.

Questions abound. How many of these workers own property? How many local businesses are engaged with Kiewit, and what is the financial extent of that engagement? How many workers will leave Sea to Sky communities once the project is completed? Will equipment be left behind to the community, things like trucks, tools or machinery?

Answers are few. Kiewit did not return numerous phone calls for this article, though representatives from the Sea to Sky Highway Improvement Project have said that no equipment will be left behind. The other questions have so far gone unanswered, and the province is not in a position to gather the information because, it says, Kiewit is a private contractor.

Certainly, businesses will feel an impact.

"We had a very good relationship with Peter Kiewit when they were on the project," said Brent Snell, general manager of Squamish-based Cardinal Concrete, one of the project's suppliers. "And our company has benefited from them coming to us as local suppliers. We're going to miss them because we're now very slow as a result of them winding this project down, and the condo developments in Squamish have tapered off, and a lot of our work has slowed down significantly."

As for the number of workers left in the community, no number is concrete, though estimates are being made with confidence. Darren McCartney, first vice president with the Squamish Chamber of Commerce, figures the number is between 100 and 200. He also points out the ailments of the real estate market, noting that those conditions, which could continue for six months or longer, are compounding the problem.

"It's safe to say without a doubt that local small business is going to miss the spending," he said. "That combined impact will become more apparent."

The end of boom days has been on the minds of Squamish councillors for some time. Last year's election saw each of the 18 candidates sounding alarms over the need for job lands, though some with more passion than others. The new mayor, Greg Gardner, mentioned several times that the housing boom would not last forever, nor would Kiewit work the highway in perpetuity.

"We are very much looking forward to try and see what we can do to make sure there are jobs in our community after that highway construction project comes to an end," he said in a recent interview. "It is a concern and a priority."

From McCartney's perspective, there are some solutions that can be achieved in the short term. With construction slowing, the planning department has time to catch its breath. Indeed, Director of Planning Cameron Chalmers has said as much to local media. That time could be used to ensure that developments with financing aren't hindered as they try and move forward. Development proposals, he said, have to be ready for building permits, especially if they are commercial in nature.

"So we try and mitigate the construction loss," he said. "It's early for these kinds of things. The new council has been responsive in setting up new committees and looking at different areas to change the way things are done. They've made it clear they're open for discussion."

One of those committees focuses on economic development. Chaired by Paul Lalli, one of its first orders of business was to recommend the restructuring of the Squamish Sustainability Corporation. He doesn't seem overly concerned with the coming completion of the highway. Based on private conversations he's had around the community, Lalli figures Kiewit will take many of its workers to the Gateway Project in Vancouver.

At the same time, Lalli said his committee hasn't approached Kiewit for more information, though McCartney sees increased communication as a benefit.

"The way I would view it is perhaps there's an avenue if we put forward a request or kept on them about it," McCartney said. We may be able to facilitate that info."

At the same time, McCartney said the Kiewit numbers aren't specifically important. While there may be 200 unemployed walking away from that job, there could just as easily be the same number walking away from another set of local construction projects.

"The way I look at is it doesn't matter what the number is," he said. "They're gone regardless. We've got all real issue here because we've just lived through a construction boom in this town."