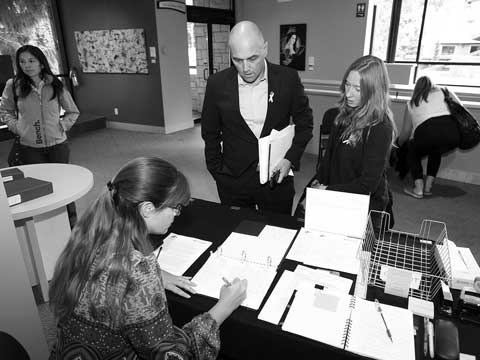 "Well I have a funny idea about how this is going to go," Councillor Chris Quinlan said before endorsing the proposal to move the Alpine Paving asphalt plant 150 metres from its current spot.

"The question is whether it can be moved, and that's not going to happen with this council," he said, noting the only option on the table was the soon-to-be-defeated proposal.

Which the 40-person audience did. They cheered and they hollered. Cameras flashed. People slapped high-fives and hugged each other. Tears of joy or relief streamed down more than a few faces and there was a general sense that, yes, the people had won this part of the fight.

For the mayor, the outcome wasn't a cause for celebration.

"I'm actually quite disappointed. I'm sad for the residents down there who were supportive," Melamed said.

To him, the rezoning bylaw was the best thing council could do to address the issues initially raised by the community, which was the concentration of emissions from the asphalt plant.

"It's a meaningful upgrade for an unacceptable status quo," he said.

"It troubles me, 12 or 14 years later, to go back to a business owner in Whistler after we made a decision to put a neighbourhood next to his plant and say, 'You know what? Back then we thought this. Now we're choosing to interpret this differently, and now you're going to have to pay.' I don't think that's a good way to do business. It's not logical to me."

He said he had two regrets in the process: that an opportunity for community input was not held before the agreement between Alpine and the RMOW was reached, and that he encouraged people to find their own legal opinions.

"It was naïve of me to think that anybody could make that decision that didn't have access to the same information that our lawyers had, and that was most unfortunate," he said.

He added later, "I'm going to have to look some people in the eye, and say, 'Sorry, it looks like you're going to be living with the status quo, because I can't quite frankly see a way out.'"

"Oh, he doesn't have to worry about that," said Tim Koshul, struggling to compose himself, tears of relief streaming down his face. "I'm ecstatic to live with the status quo, because the status quo means that we have a very good shot of getting this heavy industry out of the neighbourhood and living in a safe place where we can all enjoy our lives and kids can play and everything else."

He said there are two lawyers waiting on a call from Koshul following council's decision about what the next steps will be. Those steps are up in the air at this point.

"We will take steps to get them out of there and make this the most amazing neighbourhood that it was planned to be for this community. I haven't been at a loss for words for 10 months," he laughed.

Members of the crowd came up and hugged Koshul, patted his shoulders, as they did to one another, exchanging good will and relief, that hope remains alive that they can, somehow, get Alpine Paving to move.

Councillor Ralph Forsyth brought forward a notice of motion for the municipality to enforce the current zoning at the asphalt plant site. That will be discussed at the next council meeting.

Forsyth said he opposed the rezoning application because it does not constitute a good example of land use.

"I think the trend in that area is to remove the landfill and waste transfer station to clean up the neighbourhood," he said. "That's a trend that as we consider land use policy is one we should continue. One of the few powers that council has is land use and we should take it seriously," he said.

Councillor Ted Milner commended staff and the rest of council on the proposed compromise, stating they did a good job but added the majority of people are against it.

"This is not the time to entrench the plant with a rezoning."

Instead, he said the plant should remain where it is while staff and council work toward aggressive air quality standards and testing.

The air emissions standards that Alpine Paving would have been subjected to as part of the rezoning package, will no longer apply. The bylaw may be put forward but Alpine will be exempt, Melamed said, because established use takes precedence.

"(The air quality bylaw) might come forward on the books, but we can't compel him to comply," he said.

He said he couldn't speculate what staff's next steps will be, but the topic will be addressed in "due time."

As for the prospect of moving the plant, Melamed said, "We can't compel the operator to move and we would likely not be successful in a (legal) challenge to force him to move."