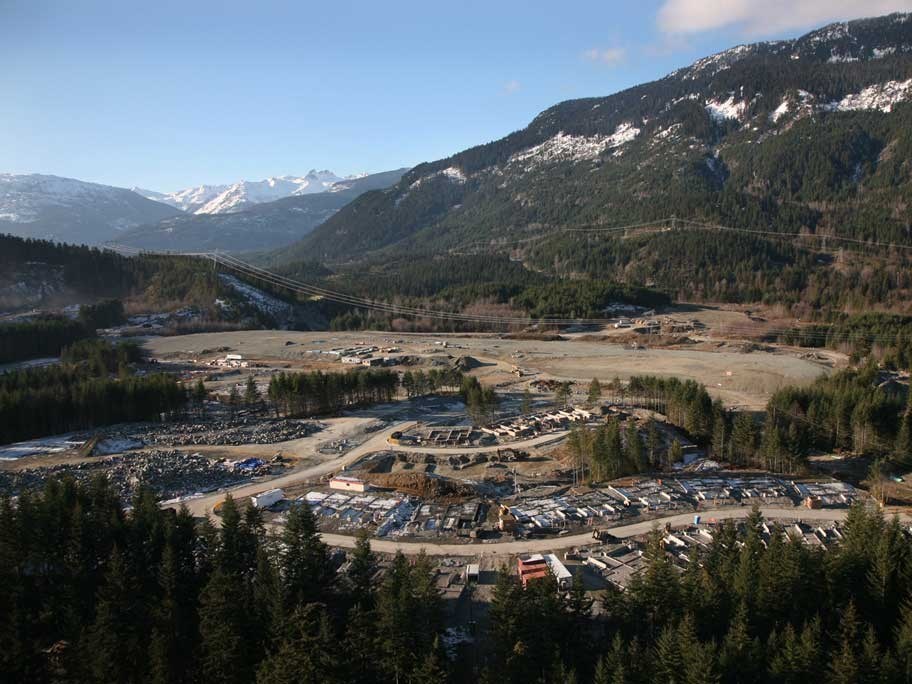 Last week a Supreme Court Judge ruled that asphalt production is a permitted activity within the zoning of Alpine Paving's property at Cheakamus Crossing, nullifying a municipal cease-and-desist order that was ignored by the company anyway.

The news came as a blow to residents, some of whom have been fighting the plant's operations for over two years. They are adamant that the plant no longer belongs next to a residential neighbourhood and they argue that it was never properly zoned.

Few even knew it existed until they had already made down payments and visited the site while it was under construction, and the disclosure statement in their real estate documents suggested that the municipality was working to have it relocated.

But the court ruling on the plant is not the only disappointment that newcomers to the mainly employee housing neighbourhood have had to face in the last year and a half since they took possession of their duplexes, townhouses and condos:

• The District Energy System (DES) that captures heat from the sewage treatment plant and pipes it to homes in Cheakamus Crossing has not resulted in any real savings, as some residents believed it would. In fact, some believe the combination of hydro, gas and DES is actually more expensive.

The system also needs to be manually reset by owners after a power outage, and one resident has posted on the neighbourhood Facebook page that she has had five "red screens" since taking up residence in the fall of 2010.

According to Facebook posts, some residents are paying out of their own pockets to have the DES infrastructure inspected before the warranty on the system runs out.

• Residents were led to believe that the Canadian Sports Centre gym at the Whistler Athletes Centre would be open to the public when it wasn't booked out by sports teams. However, those open hours never materialized as the gym is far busier with sports teams and programming than expected. The facility is also well funded and does not need to bring in the public to offset operational costs.

• Last fall, the municipality attempted to close several parking lots in Cheakamus Crossing that were being used as overflow parking by residents. One vacant lot at the top of Mt. Fee Road was kept open until April, but according to residents that could close soon and no alternatives have been offered.

Chef Adam Protter, who has three large vehicles — a van for transporting his disabled daughter, a pickup truck for towing his large barbecue and the trailer with the barbecue itself — does not have enough room for more than one of his vehicles on his property.

"(The municipality) made some promises and said they'll allow us to park on the gravel lot at the top of Mt. Fee Road until April, but it's a terrible place," said Protter. "We agreed at the meeting that we should be able to park where we always have down below, as long as bylaw does its job and enforces things like vehicles without wheels or proper insurance."

According to Protter that agreement did not become policy, and their strata managers at Whistler Resort Management received a notice from the municipality that "reneged on everything they promised," said Protter. The lower, paved areas won't be reopened to residents, and they will have to pay insurance in the future to continue using the gravel lot.

• The gravel production at the quarry where the asphalt plant is located has proven to be a greater issue for some residents than the asphalt. There have been issues with trucks, noise and dust, and this past summer there was an unscheduled rock blast that some residents say shook their homes. Protter's wife was moving their disabled daughter from her bed to her wheelchair when the blast occurred and almost dropped her onto the floor. The provincial environment ministry responded to their complaints, and in the future the gravel pit will have to post advance notice of any blasts in the area.

• The original plans for the neighbourhood park have been reduced significantly. The original plans included two grass soccer fields, green space, a water park and a toboggan hill, with future plans for hard courts, skateboard park, bike skills park and a running track. However, at an estimated cost of $9 million that plan was shelved and replaced with a new $1.4 million park development plan that will get underway in the spring. The new park is limited to a grass lawn, a play structure, a gravel soccer pitch and track and two sand volleyball courts.

When plans were changed, some residents suggested that the municipality should have priced the proposed park before including it in the planning for the neighbourhood.

• Spaces that were zoned for a restaurant/pub and grocery store continue to sit empty. Some prospective restaurant owners have said the cost of retrofitting the space is prohibitively expensive, and a deal that would have seen the municipality underwrite over $300,000 of those renovation costs to get Whistler Sport Legacies (WSL) as a tenant — which would operate the facility through a contractor, and use it to provide food service to athletes staying in their lodge — fell through because it didn't make financial sense to WSL.

Protter, who owns a barbecue business and had been tapped to run the restaurant, said the concept doesn't make sense the way things currently sit.

"There is no grocery store or restaurant for a variety of reasons, one being there are only eight parking spots, and they almost put a 78-seat restaurant in there," said Protter.

• Residents of The Springs building at Cheakamus Crossing got an unpleasant hike in their strata fees last November when it was revealed that the strata neglected to include the common area electrical and natural gas costs. The strata also neglected to budget for the District Energy System and other maintenance work. As a result, one resident interviewed by Pique saw her strata costs increase $60 per month or $720 per year.

• Until this winter, all northbound buses that travelled through Cheakamus Crossing went to the Gondola Transit Exchange. With the Valley Connector Service, most buses that originate at Cheakamus Crossing now turn down Northlands Blvd and continue north. To reach the ski lifts, riders now have to walk or jump on the Village Shuttle service, and on the way home they have to shuttle or walk back to the stop at Gateway and Northlands.

• As a cost cutting measure from the most recent service review, the municipality is not plowing the new section of Valley Trail that connects Cheakamus Crossing with Spring Creek and the rest of the Valley Trail network. The section was only paved in summer of 2011 after fire hazard and rains disrupted plans to pave in fall of 2010.

Given the number of issues to crop up for residents of Cheakamus Crossing, Protter objects to the suggestion that residents are somehow "whiners."

"The truth is that every single verbal promise that was made has been broken for the most part — all of the spin, all of the assurances, all of the good-feeling stuff that was part of getting us in there; all the hints and assumptions they let us jump to at open houses and in real estate offices to get us in there — all that stuff turned out to be wrong," he said.

"And we're still being seen as whiners by the rest of the town because we got such a good deal on these properties. Well nobody is saying that to residents at Spruce Grove or anywhere else with employee housing."

Protter is hoping that the municipality will appeal the Supreme Court ruling. He attended court and believes that some crucial details were downplayed — including the fact that the operator is trucking in both aggregate and bitumen to the site to make asphalt and doesn't use actually any of the basalt material mined on the site to produce asphalt. As a result, Protter said that asphalt production shouldn't be allowed under the mining permit.

Some residents said last week that they would sell their homes and move out after the court decision, while others planned to appeal their property assessments. As of Tuesday no homes had been put up for sale through the Whistler Housing Authority (WHA).