Athletes’ village will wrap up with $1 million surplus

Only seven resident-restricted units left to sell
Sep 4, 2009 8:18 AM By: Clare Ogilvie 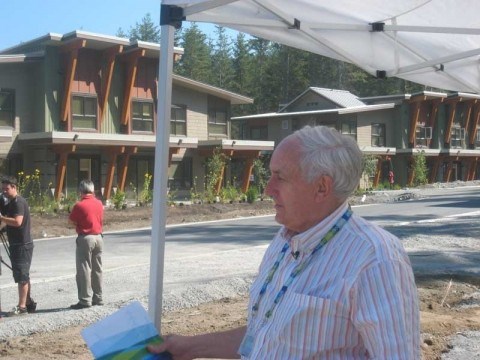 When builders of Whistler's Athletes' Village hand the keys to 2010 Games organizers in a few weeks there will be more than $1 million left in the construction bank account.

"I suspect there will be between a million and $2 million left," said Eric Martin, chair of the Whistler 2020 Development Corp (WDC), the organization tasked with building the $161 million village.

That's heady news in a time of recession and given that the construction took place in one of the hottest markets in history.

Martin, who along with other WDC board members got $1 a year in salary for guiding the project along, said there were significant challenges along the way. In fact at one point Whistler felt it may have to build a temporary village instead of the new neighbourhood that will become affordable resident housing after the Games.

"It was a tremendous challenge but I think we had a very good business plan," said Martin, of Bosa Development.

The money will likely be fed back into the pool of hotel tax the municipality gets from the province, which helped fund the project, said Martin.

The Whistler Athletes' Village plan called for many contractors to be used making sure risk was spread out.

The village will house 2,850 Olympic and Paralympic athletes, officials, and coaches during the Games in new duplexes, apartments and townhouses within the 40-hectare site.

It also includes the Rona High Performance Centre: a gymnasium, a 100-room lodge and 20 townhomes. This will be used after the Games to house visiting teams as they train and compete in Whistler.

The Vancouver Organizing Committee contributed $50.4 million to the high performance centre, which it designed and constructed. It was originally budgeted to cost $16 million.

VANOC contributed $37.5 million to the athletes' village project. The balance was financed through the municipality, which will recoup its investment by selling off the units.

The site now includes several enormous tents that will be used during the Games to house things such as the medical clinic and the 24-hour dining hall, capable of feeding 1,200 people at a time. As a sponsor, McDonald's will have a restaurant in the facility though many other foods will be available.

The furnishings for the village have also been picked out, including the beds - the number one concern to athletes.

"We went... and started testing out different mattresses to be able to come up with the best post mattress," said Nejat Sarp, vice president of villages and services for VANOC.

"We probably tested a 100 different mattresses before we found one that we felt was comfortable."

Athletes will also get a cozy goose down duvet and 240 thread count sheets.
"This is what you normally would find in a four or five star hotel," Sarp said.

About 97 per cent of the employee restricted homes have already been sold.

"There are only seven left," said Joe Redmond, president of WDC.

The organization has also put nine market value lots up for sale, with two of those already spoken for. They range in price from $475,000 to $550,000.

There are also 20 market value townhomes for sale, which exist in their own strata. Of those, eight have been put on the market, said Redmond.

"We hesitated putting them on the market," said Redmond, explaining that there were concerns over the weakness in the real estate market and the fact that people had to put up to 10 per cent down but would not get to move in until the summer of 2010.

"There has been a little bit of activity and there have been a number of people who have called Whistler Real Estate to go through them," said Redmond.

"It is the market townhomes and market lots that are helping to subsidize those units," said Redmond.