Attendance, business down at WSSF during year of 'abnormal' weather 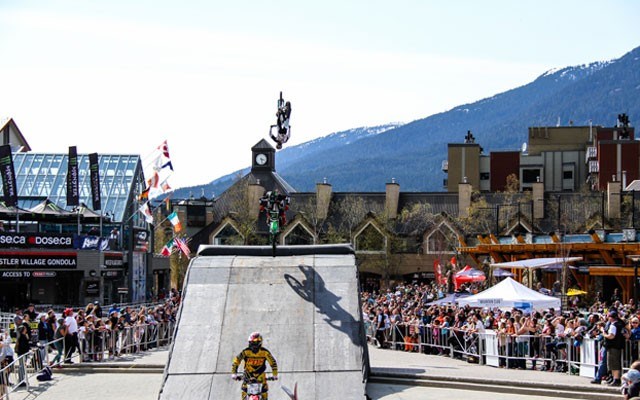 With virtually no snow in the valley, and several last-minute changes to programming as a result, organizers of the World Ski and Snowboard Festival (WSSF) had the chips stacked against them before the event's 20th iteration even began.

It resulted in an estimated 10-per-cent drop in attendance and a decline in business for some resort retailers compared to previous years, but don't expect that trend to continue in the long-term, explained festival director Sue Eckersley.

"Considering the snow issues and having no Easter holiday during the festival this year, I think we can say that we were happy with what the event brought to the village," she said. "It definitely wasn't one of our busiest years, but I'm looking forward to next year, with Fido coming onboard (as sponsor of the Outdoor Concert Series), the size and calibre of the music acts are going to go up and that will definitely be reflected in terms of the number of attendees at the festival."

The lack of snow presented some unique logistical challenges for organizers this year, forcing the relocation of the World Ski Invitational big air from Skier's Plaza to Blackcomb Mountain.

Organizers had planned the rail jam in its place as part of the Gibbons Plazapalooza, which included fire spinners and a live DJ, but even that proved a challenge when it became clear the conditions weren't suitable for the competition. So, at the 11th hour, a freestyle motocross demo was added to the mix, with the municipality making an exception to a bylaw that prohibits motorized vehicles in the village.

The event was well received by festivalgoers, said Eckersley, who added that it may return in future years, or it may lead to other motorized events on the program.

"We would definitely chat with (the municipality) again if this event is a possibility, but it's not something we would push," she said. "I think it's opened some doors as well. One of the things we haven't been allowed to do on the hill is anything involving snowmobiles."

As in years past, third-party events enjoyed strong attendance, with the Pro Photographer Showdown, 72 Hour Filmmaker Showdown, Multiplicity, Intersection and the brand new Whistler Comedy Showdown all selling out. The free events, like the Skier's Plaza concerts, didn't fare as well, especially with the cancellation of one of the April 18 musical acts, Alabama rapper Yelawolf, who missed his connecting flight.

La Bocca GM Brenton Smith said that, while business was swifter than the weeks leading up to WSSF, walk-in traffic at his Village Stroll restaurant was slower than previous festivals.

"Over the years we've relied on the festival to give us a good season-closing week, but this year it seems to be one of the weakest one of the last several years," he said.

Other businesses reported a similar drop-off to the Whistler Chamber of Commerce, whose CEO Val Litwin said that retailers need to be creative in adapting to the challenges faced during the festival each year.

"The lesson for the business community here is that we can never know what's going to happen year over year, so be responsive to how traffic is flowing through the resort and be creative with your offerings," he said, adding that restaurants may consider offering their discounted shoulder season menus earlier to coincide with the festival.

In terms of resort occupancy rates, Tourism Whistler is predicting somewhere in the 70- to 80-per-cent range for the festival's first weekend, with last-minute bookings driving "strong pick up" over the final weekend, according to VP of marketing Louise Walker.

Although she admitted this year's weather was "an abnormality," Eckersley said it reinforced the need to continue offering a range of events that don't necessarily rely on snow.

"Anything that's going to survive all the different challenges has to be diverse, and the festival I think is the most diverse on Whistler's calendar," she said.

"We will certainly use this as a learning opportunity and have the Plan B sculpted in the background."

Whether that backup plan will result in new events on the schedule remains to be seen, but Eckersley said there has been some consideration of adding mountain biking to the program.

She also hopes to bring back Plazapalooza — even if it doesn't include motocross or other high-flying athletes. "I think that Plazapalooza is likely something we'll embrace and figure out how to make a big show happen in Skier's Plaza around things that aren't necessarily about athletes hucking themselves through the air," Eckersley said.