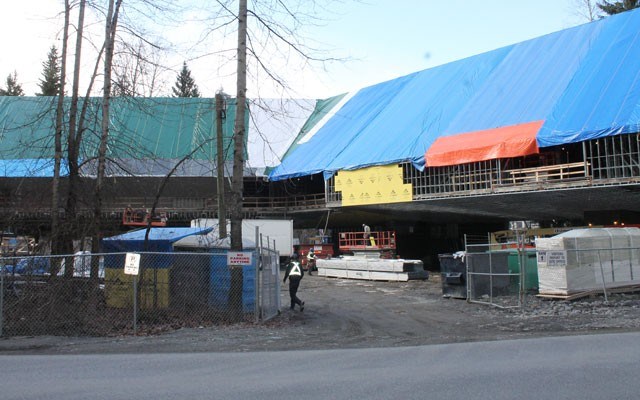 Still under wraps The construction of the Audain Art Museum continues as the gallery itself is already becoming more established. Photo BY Alison Taylor

Quiet fundraising efforts to create a $25 million endowment fund to backstop the new Audain Art Museum are now ramping up, with a half-a-million dollar donation this week from the Whistler Blackcomb Foundation.

"The endowment is there to ensure that the museum has a significant pot of money that can assist in our operations," said Suzanne Greening, the museum's executive director.

These types of endowment funds are not uncommon in arts and culture institutions.

The Audain money will be invested with Genus Capital Management, based on a conservative four per cent return. At $25 million, it could generate income in the range of $1 million per year, which would be used to offset any operating deficits at the museum.

"What we would like to hope is that we actually don't have any deficits, but the people that have been advising us say that that's a faint hope," said Jim Moodie, vice chair of the board for the museum and for the foundation, referring to the fact that art galleries typically don't operate on a profit or a break-even scenario.

"And since nobody else has been able to do that, there's probably not a real good reason why we should be able to do that. So the endowment is hugely significant."

The half a million dollars from the Whistler Blackcomb Foundation brings the total amount raised to date to more than $6.3 million with a big fundraising "Sneak Peek" event planned for Saturday night, March 28, at the Fairmont Chateau Whistler.

It's the museum's first official fundraiser, now sold out, with dinner for 350 people.

Whistler's council will be attending, having bought a table of eight for $3,200. The money comes from council's spending allotment. It's an unusual move, underscoring just how important the Audain Art Museum will be in Whistler.

"It just shows that this is a seminal event," said Mayor Nancy Wilhelm-Morden.

"We decided as a group that it was important for us to be at the event, that it would continue to show the collaboration and partnership between the municipality and the Audain Art Museum and to recognize that this is going to be, and it's a well-worn phrase now, but this is going to be a game-changing time for Whistler with the opening of the museum in the fall."

Greening is in the process of establishing an annual operating budget for the museum. It's no easy task.

Will there be 50,000 guests or 250,000 guests a year? What is the tipping point for the cost of admission? How much will it cost to operate the state-of-the-art 56,000 sq. ft. facility, with little wiggle room on its temperature and humidity? Will there be much uptick on the facility rental?"Whistler hasn't had an institution like this before so it's really hard to know how well (we'll do)," said Greening, adding that the board has huge debates on what attendance will be like.

The museum is looking to become a Class-A facility, which would allow visiting exhibits from around the world to be featured.

As such, the H-VAC system for the facility is a very complicated heating and cooling system controlling the internal environment; the museum will need to produce one year's worth of 24-hour computer read-outs of humidity and temperature before getting status, among other things.

Construction on the $30-million-plus facility is moving steadily ahead for a fall opening.

"I think it's like any construction project anywhere," said Moodie. "It's never going as fast as you had hoped, never costing as little as you would hope."

The schedule right now is to be in the building by the end of July and ensure the building is fully functional, before moving in art.

Just as construction is ramping up with the fall deadline looming, there is also growing interest from art collectors willing to share their pieces with the museum, just like Vancouver art collectors Jacques Barbeau and Marguerite Owen, who have committed 15 of their 80 original works from the late B.C. artist E.J. Hughes.

"Much as Jacques Barbeau got very excited by this incredible gift and legacy that Michael Audain and Yoshi Karasawa are leaving, there's this desire that people have been collectors for so long and want to potentially see their collection or objects from their collection in the public domain."

There will be an acquisitions committee to vet the pieces for display with Greening not only acknowledging the finite space of the museum but also its mandate.

"Our focus is the art of the Pacific Northwest," she said.

The gallery space in the museum, which will house works by Emily Carr, will be name in perpetuity 'The Whistler Blackcomb Foundation Gallery.'

The $6.3 million raised to date has come from foundations and individuals in Vancouver and the Sea to Sky corridor, such as the Whistler Blackcomb Foundation's $500,000 gift.

"The Audain Art Museum will not only bring lasting benefits to Whistler and the entire Sea to Sky corridor but will also enhance the overall visitor experience," said the foundation's president Dave Brownlie.

"We are happy to lend our support and are grateful to the Audain family for making this amazing legacy possible."