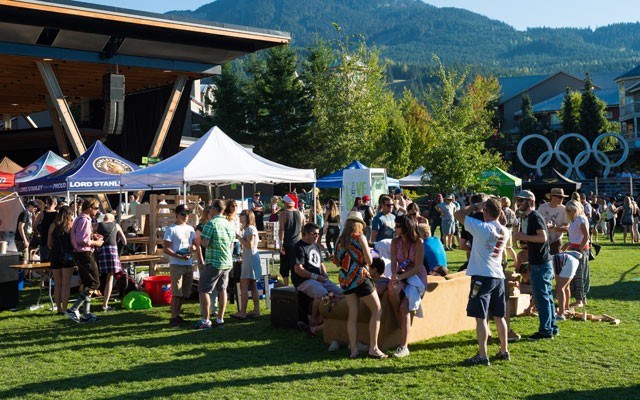 Higher than ever Whistler visitor numbers were at record levels, keeping hotels busy in August. Photo by Mike Crane/Tourism Whistler

It's too early to officially declare summer 2014 as the best on record, but with August coming in as the fourth consecutive record-breaking month for room nights, odds are looking good for a banner summer.

The rising room night trend this summer comes as some industry insiders point to the falling Canadian dollar as a positive sign of things to come for skier visits this winter.

This week the loonie hit a low of U.S.$89.14 cent as the American dollar continues to surge.

"At the time of writing, the Canadian dollar is below U.S.$0.90, which will have a positive influence on both tourism arrivals and skier visits for the 2014-15 ski season," said David Lynn, president and CEO of Canada West Ski Areas Association (CWSAA) in his September newsletter.

While it's just one of many external factors that impact travel plans, the falling dollar against the strong American greenback could give Whistler a clear advantage in the months to come.

"It changes quite frequently so we want to make sure that it is a long-term impact before we try and predict the change that it will have."

Meanwhile, Tourism Whistler confirmed this week that August room nights were up six per cent over last August, which was the busiest on the books until now.

"We are also seeing a positive shift for rates, but still offering extremely good value for money," added Walker. "For the month we saw an increase in regional and destination visitors so Whistler's reputation is really increasing as a summer destination."

Mid-week occupancy in August grew by nine percentage points, compared to a one-point increase on weekends.

Both the B.C. Day long weekend and the two weekends bookending Crankworx were above 90 per cent occupancy. The last remaining August weekend, without a festival or holiday, was also over 90 per cent full.

Regional guest visitors were up four per cent and destination visitors up eight per cent in August.

September's room night numbers won't be available until the third week in October but all indications are for growth there too as Tourism Whistler tackled the summer business with an eye to extending the season into September (see related story on page 14).

And October, while a small month for room nights in Whistler's yearlong calendar, is also pacing ahead.

In his September newsletter, David Lynn of CWSAA also outlined trends in skier visits and predicted a rebound in the Western Canadian visits this season. Skier visits dropped eight per cent in Western Canada last season to 8.6 million, driven by adverse weather. Whistler Blackcomb was not immune. It experienced a five per cent drop over the entire ski season compared to the previous year.

This winter is shaping up to be different, driven in part by the loonie.

"This had a dramatic adverse impact of Canadian Tourism Arrivals and Skier Visits," said Lynn.

Among his reasons to be bullish, Lynn highlighted not just the falling loonie, but also the rebounding economy, the recent capital investments at ski areas, and the strong marketing support.