Australians get a taste of Whistler winter with Today

Hidden underneath the village, running up the mountain, snaking down to the Callaghan Valley and up to Alpine Meadows is a "seamless highway of information.
Dec 21, 2011 8:00 PM By: Alison Taylor 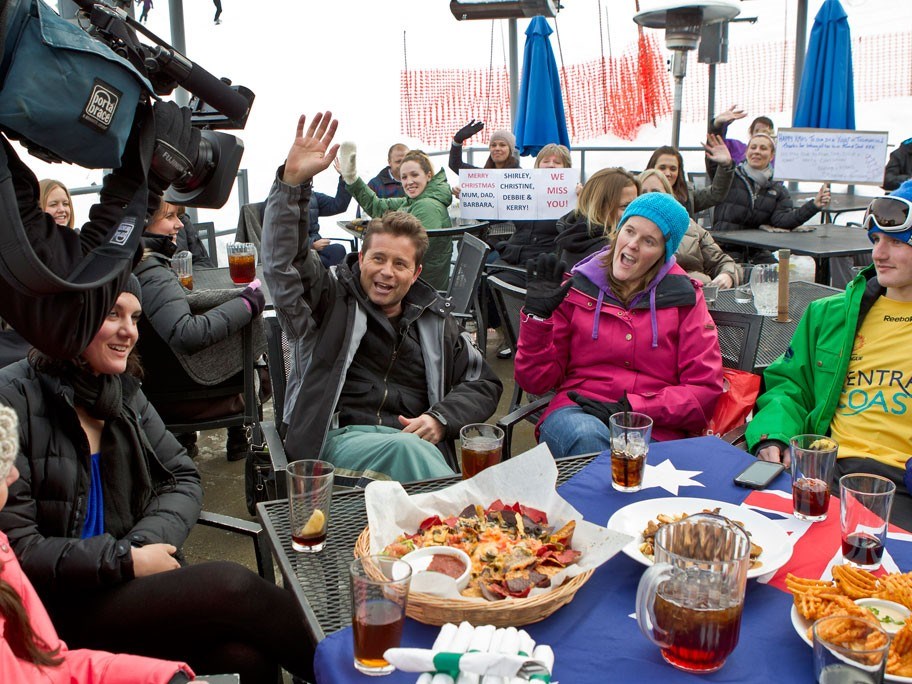 weatha bloke Steve Jacobs of the Australian Channel 9 Today Show films a live weather report from the patio of the Garibaldi Lift Company (GLC). photo by joern rohde, <a href="http://wpnn.org/">wpnn.org</a>

Hidden underneath the village, running up the mountain, snaking down to the Callaghan Valley and up to Alpine Meadows is a "seamless highway of information."

It's not as visible as the $105 million sliding centre, or as crucial as the $600 million highway upgrades, but it's a critical piece of infrastructure left behind in Whistler from hosting the 2010 Olympics Games, making the resort one of the most wired little mountain towns around.

It's an underground fibre-optic network.

Australia's Nine Network took advantage of that multi-million fibre-optic cable legacy for the first time since the Games this month when Today, the number one morning show in Australia, came to visit with weatherman Steve Jacobs last week.

Jacobs broadcast live from the Sightlines Bridge near the Olympic rings at Whistler Olympic Plaza, as well as from the GLC patio and did a few turns at the base of the mountain, sending the message via the fibre network that Whistler is open for skiing with more coverage in North America than any other resort.

"That message, to be able to send that to Australians at the beginning of the ski season, is exceptionally valuable because many of them are still making decisions about where they're going to go this winter for a vacation," said Tourism Whistler's communications manager Breton Murphy.

That's exceptional because Australia is one of Whistler's most important overseas markets, now vying with the U.K. for the number one spot, representing seven per cent of the market share.

With a reach of more than 400,000 daily viewers, Today has the potential to get Australians thinking about a "summer vacation" to a winter wonderland. When that reach is translated into advertising dollars, based on the value of similar coverage in recent years, Murphy estimates it is in excess of $800,000.

Tourism Whistler has long established a relationship with Australia's Nine Network because it was one of the broadcast rights holders during the Games.

"One of the benefits from hosting the Games, and developing these relationships with these important broadcasters, is we've been able to solidify opportunities moving forward," said Murphy.

With the fibre network coursing through the village and linking the Olympic sites, Whistler can offer broadcasters the chance to tape live broadcasts from 14 different locations and send footage back to the studio without need of a satellite truck.

Today had a satellite truck for its western jaunt throughout B.C. and Alberta, but the fibre network meant Jacobs could broadcast live from different locations to showcase Whistler at its best.

"It provides us with an exceptional point of difference, a competitive advantage for securing opportunities for broadcasters to come to Whistler because we're able to provide them with state of the art technology that not only makes their life easier when shooting in the resort, it provides them with more options, which is what they're looking for — to have a varied and more interesting broadcast — and it can save them money at the end of the day," said Murphy.

He said there will be even more opportunities in the future, not just for broadcasters, but for corporate clients who want to link in.

The fibre network was an investment by Bell in the lead up to the Games. Bell installed 286 kilometres of cable from Vancouver to Whistler to ensure a legacy of improved telephone, TV and digital services for Whistler residents. That's in addition to the cable in the village. The cable is part of the $32 million commitment by Bell to wire the 2010 Games.

"Bell set up the infrastructure to prepare for the Games and we worked with them on this to help ensure that it would work for the resort's long-term needs," said Michele Comeau, manager of communications with the Resort Municipality of Whistler (RMOW). It is not clear how much money the RMOW invested in the fibre network.

Whistler Blackcomb too invested fibre-optic cable in its locations.

Comeau emphasized that it's the partnerships in the resort that make deals such as the one with Nine Network successful. It involved not only Tourism Whistler and the RMOW, but also Whistler Blackcomb and Whistler Sport Legacies.

The fibre network was also used this month for the Luge World Cup event. The broadcaster for that event was Eurovision.

Eurovision connected more than ten track and event cameras to an onsite production truck through the fibre network and then directly to Vancouver, then on to the waterfront in downtown New York City, via Toronto.