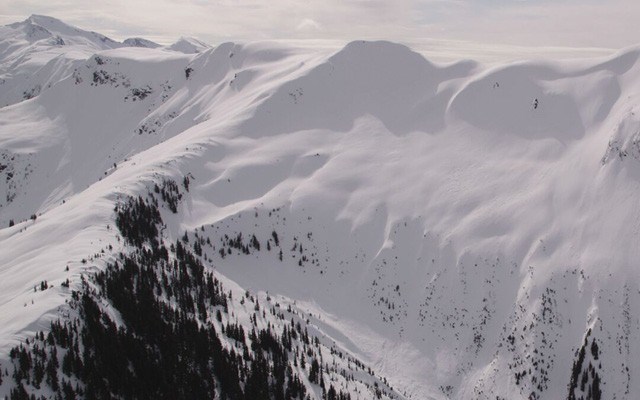 happy ending Cherry Bowl at Shames Mountain near Terrace, B.C., was the site of a 2013 avalanche in which three people were buried alive for more than 20 minutes. PHOTO courtesy avalanche canada

The video trailer opens with a scene you might see in an Ansel Adams photograph: Moody black-and-white footage of a shadowed mountain peak and a title: Rescue at Cherry Bowl.

The eight-minute Avalanche Canada video is a cautionary tale of backcountry survival from four skiers who were caught in an avalanche in 2013 on Shames Mountain near Terrace.

The AC microsite features video, graphics, text and images and goes live Nov. 4. Clayton said it's an incredible story told by the survivors, some of whom had just completed a Companion Rescue Skills course a few weeks earlier.

"Their training just kicked in, that made all the difference," Clayton said from the AC office in Revelstoke. "We got connected with an American production crew that was in the area a few months later and they took all this footage and they had interviews with everyone involved — these people are all so articulate and emotional. It's really compelling."

Clayton said the video looks back on the forecast for that day and also examines how the hoar-frost layer played a role in weakening the snowpack. As well, she said, the video explores the human factors and the contrasts of how two groups approached a day that could have ended with casualties instead of survivors.

One group of four had skied down first while another group of four was at the top of the run — and both groups had done their own assessments of conditions. As the first group finished the run and started to remove their skis, the second group had started down — which triggered an avalanche that rumbled down the face at more than 100 km/h.

Three skiers were buried for about 20 minutes before the other skiers could dig them out. All survived.

"The group that was caught — two guys and two girls — the girls were concerned but didn't speak up," said Clayton. "There's been some really interesting work done on decision making in avalanche terrain, and on gender imbalance, for sure," she said. "There is also the concept of the expert halo: someone seems to be the expert and nobody questions him. And the person doesn't want to be holding anybody else up. Human behaviour is fascinating."

The new video is another step in the ongoing support and education for outdoor users who count on the information that AC provides. As the season ramps up, AC has delineated a separate region for South Coast mountains, which means that Whistler Blackcomb is included in the Sea to Sky region.

"What this does is effectively take the warmer North Shore mountains out of the Sea to Sky region, which has colder and more glacial terrain," said Clayton. "It is more homogenous in terms of climate and terrain and that allows us to be more precise in our forecast. When we took a critical look at the boundaries, we determined that we could do better here."

Clayton said the steadily increasing number of people taking avalanche-skills training is encouraging, and totals upward of 8,000 in each of the past five years.

"That's really impressive," she said, adding that the number of deaths in the backcountry due to avalanches has decreased.

"What backcountry skiers were learning in the late 1990s and early 2000s — that's what the snowmobiling community is going through now," she said.

"That is one thing we're really working on — snowmobilers are still less than 15 per cent of those who take training, even though there's been a big jump in numbers. But it's still not enough," she said.

The AC website contains a wealth of information, including Throttle Decision, a new initiative that highlights the 10 Commandments for Mountain Snowmobilers, and the educational exercise called Backcountry Ascender, both of which are specifically geared to snowmobile users.

Another new course on offer is managing avalanche terrain. Clayton said AC recommends that participants have their Avalanche Skills Training 1, and this adjunct course is field-based and designed to expand on terrain management.

Clayton said it would be almost impossible to regulate backcountry requirements to ensure everyone is safe.

"But it's peer to peer, its cultural, it's social pressure," she said. "You don't flip a switch on that."

In an emailed press release, Whistler Blackcomb's Director of Mountain Operations, Doug Macfarlane wrote: "There will be an increased consistency in the information offered, with the Sea-to-Sky forecast now coming from one agency, Avalanche Canada. Our patrol forecast team at Whistler Blackcomb will continue to work diligently with Avalanche Canada to share the most accurate information from our area."

For more information and to watch the video, go to avalanche.ca/cherry-bowl