Warning aimed at those who might consider ducking ropes to find fresh tracks
Mar 14, 2013 3:02 AM By: Alison Taylor 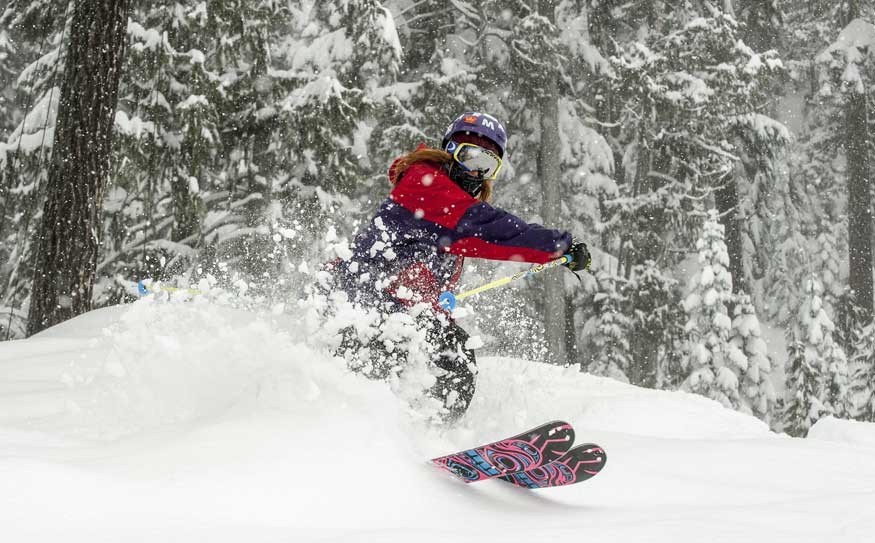 The B.C. Minister of Justice and Attorney General is not mincing her words when it comes to backcountry travel over spring break — it's just not worth the risk to go out of bounds unprepared.

"It should not be called slackcountry," said Minister Shirley Bond. "It is backcountry and it can be dangerous. This spring break, we are urging skiers and snowboarders not to go out of bounds — it can be incredibly hazardous and it is simply not worth the risk. I also want to encourage everyone to make sure that they are aware of the dangers that come with ducking the rope. This is especially important for parents to discuss with their children."

Whistler Blackcomb veteran avalanche forecaster Anton Horvath said the avalanche danger would be high this week with a trend to improving conditions over the weekend with cooler temperatures and settlement of the snowpack. If those improving conditions come with sunny bluebird days, temptation to duck the ropes in search of powder rises.

"There is a concern that with some sunny weather on Saturday that soon after a storm cycle there is the potential for skier triggered avalanche activity.

"It's when it (the avalanche danger) gets downgraded to considerable or possibly even moderate that people throw caution to the wind and they get themselves into trouble."

A Search and Rescue (SAR) specialist with Emergency Management BC, Ian Cunnings, said the provincial message is targeted at students and families heading to ski resorts at spring break.

"What we're finding is that we get a lot of particularly teenagers, young adults, that are heading out into ski areas, and skiing what we're calling the slackcountry just outside of the ski area resort, they think that they can do that without the appropriate training and equipment and as you know that's just not the case," said Cunnings.

The pointed message from the province comes on the heels of some recently released avalanche statistics from the BC Coroners Service, which highlight that the deaths are, for the most part, preventable.

It hopes by releasing the 16 years of avalanche data it will remind backcountry users of the risk avalanches pose for skiers, boarders, hikers and snowmobilers. According to the report, which dates back to 1996, 181 people have died in avalanches across the province.

The Coroners Service is working with the Canadian Avalanche Centre (CAC) and Emergency Management BC (EMBC) to further reduce the declining number of avalanche deaths in B.C.

Avalanche awareness has been improving though.

Cunnings reiterated: "Fortunately so far this season avalanche fatalities aren't as high as what they were last year. So we're hoping the message in terms of avalanche safety is really getting out there."

The province, he added, has contributed $1.49 million to the CAC since 2001 for avalanche notifications and warnings and more than 100 signs in key backcountry access areas.

Still, the Coroners Service believes that too many backcountry visitors are failing to take enough training to use safety equipment with maximum effectiveness.

Dave Steers of the Pemberton and District Search and Rescue (PDSAR) said that while his organization gets called out to very few avalanche incidents when they do it is almost always to recover bodies because most people buried in an avalanche die within 15 minutes.

"By the time the call is made to SAR, and we muster and get to the scene much more than 15 minutes has passed," said Steers.

He stressed that assessing conditions and being prepared for self-rescue is vital. The remaining amount of daylight and further avalanche risk often align to prevent rescuers from entering avalanche territory to rescue avalanche victims.

"The area has to be safe for rescuers before we'll enter," said Steers. "We can't jeopardize them."

Steers noted that while PDSAR doesn't respond to large numbers of avalanche rescues when conditions are extreme search resources could be stretched thin. On Monday, Jan. 2 of last year, for example said Steers, three avalanche incidents were reported on the same day in the Pemberton area.

"Traffic on the Duffey Lake Road is increasing," said Steers of the growing popularity of the winter visits to backcountry destinations between Pemberton and Lillooet.

With the storms, which moved through Sea to Sky this week, it is expected there will be a renewal of avalanche activity.

Avalanche danger information is available on the Whistler Blackcomb website and also on the CAC website (www.avalanche.ca).

Cunnings said there is still an element of risk in venturing into the backcountry even with all the training and safety precautions.

British Columbia avalanche statistics between 1996 and 2013:

• The average age of those killed was 36 years.

• 68 per cent died in the Interior region.