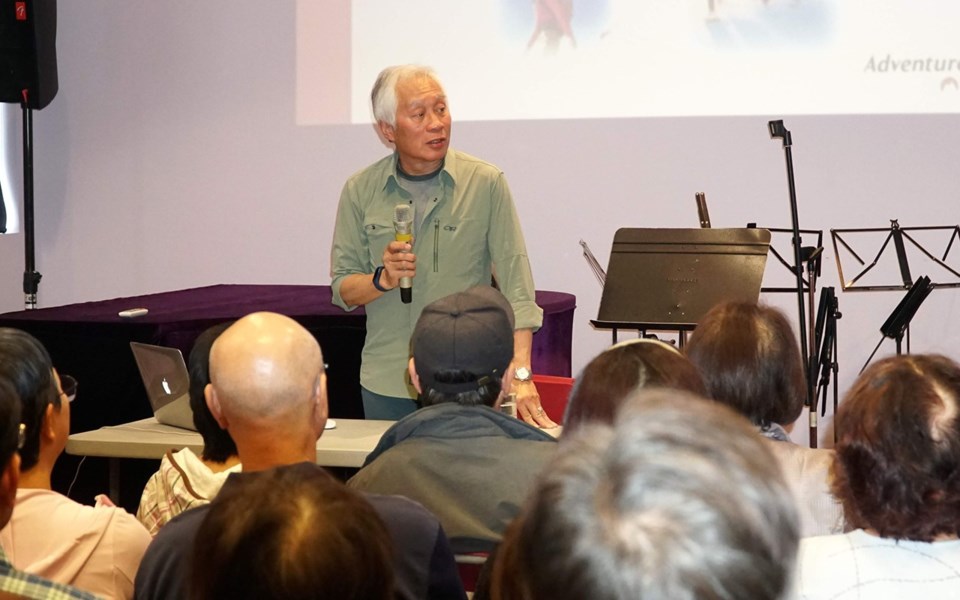 Ron Lam, a volunteer with AdventureSmart BC, is helping the organization get its safety message out to Vancouver's Cantonese-speaking community. Photo submitted

Ron Lam—an AdventureSmart BC volunteer—recently gave a presentation to about 70 Cantonese speakers at a Burnaby mall, highlighting various ways to stay safe when travelling in the backcountry.

"In the Chinese community, there is hardly anything like this," remarked Lam.

Many in the audience were new immigrants from Hong Kong, he added.

"They've been going out more frequently ... and it is important to educate them because everyone thinks that, 'It will never happen to me,'" said Lam.

According to Sandra Riches, program coordinator with BC AdventureSmart, Lam's efforts are one part of a broader initiative. "We want to reach the ESL demographic, which is very diverse in the Lower Mainland and up the (Sea to Sky) corridor," said Riches.

To that end, AdvenureSmart BC—which has a mandate to reduce the number and severity of search-and-rescue calls—is working with Avalanche Canada and various multicultural organizations, said Riches.

"These are new Canadians and tourists and residents who have lived here, or (recently) moved here," said Riches. "They love the outdoors, and they want to access it—whether it's hiking, biking, paddling, non-motorize outdoor recreation."

With an annual budget of about $500,000 AdventureSmart BC relies on volunteer members like Lam to help get out its safety messaging.

Riches said that the organization is keen to work with individuals who speak second languages and can help in its efforts.

"(Lam's) keen to reach that demographic, where we can't with my staff," said Riches. "We don't speak Mandarin, or Cantonese, or Spanish ... He's able to reach that group uniquely."

This summer, AdventureSmart employees will be partnering up with ESL volunteers at busy trailheads such as the Grouse Grind, said Riches.

"That's where we know that demographic is frequenting, and that's where I would like to have Ron (Lam) and the others join us, so we can meet the needs of the hikers in different languages" said Riches.

Current AdventureSmart materials are only published in French and English. "That's why I'm taking a different angle and recruiting volunteers who can help us face-to face," said Riches.

According to Lam, the AdventureSmart message resonates in the Chinese community. He noted that 64-year-old Chun Sek Lam and 43-year-old Roy Lee vanished while snowshoeing on Cypress Mountain back in 2016

"They belonged to a hiking group, which had some GPS location devices, but they did not use that at the time," said Lam.

According to Lam, it is incumbent on park administrators to implement signage in multiple languages to accommodate the diverse groups who are enjoying the trails.

But in the meantime, he will carry on getting the safety message out.

"I do enjoy it because it gives me a chance to help people," said Lam.