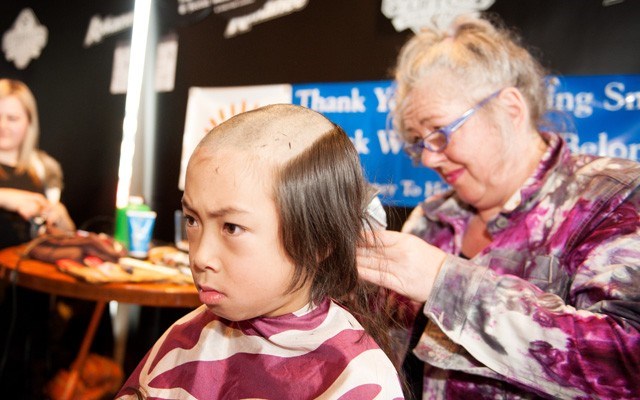 Whistler's Balding for Dollars event, an annual fundraiser for the BC Children's Hospital, started from humble beginnings.

Way back in 2002, event founder Dave Clark sent out a note in the Whistler Blackcomb employee newsletter with the goal of enlisting nine others to raise $100 each. Fifteen years later and the event has eclipsed the quarter-million-dollar mark, raising more than $266,000 in support of child cancer programs.

"To think we've raised over a quarter of a million dollars now is surreal," said Clark, who also organizes the Whistler Half Marathon. "We're super proud that we've created this platform, and we do share some legwork around pulling all the pieces together, but it's really the people who take part and the people who are donating that are making the difference. We're just creating the platform."

The 2016 Balding for Dollars was held at the GLC on Saturday, March 19, with 24 people lopping off their locks for the cause. Close to $21,000 was raised this year, with donations still pouring in at press time.

Even after all these years, Clark is still wowed by how the community rallies behind this important event.

"It's so true when you hear people say that we're so much greater than the sum of our parts, and this is the perfect example," he said. "I put the event together, but I couldn't go out and raise $20,000 myself and none of us individually could, so you put it all together and get some (momentum) behind it, and spread the word beyond what 20 individuals could do, it's awesome."

The big earner this year was eight-year-old Tannen DesBrisay, who was participating in his fourth Balding for Dollars.

The cause hits close to home for the Myrtle Philip student; his sister spent a couple months in the children's hospital a few years back.

"It's something he's always thought was really important," said Tannen's father, Matt. "He really sees the value of helping out where you can."

Balding for Dollars is held every year in communities around B.C. The funds raised go towards cancer research, medical equipment, outpatient services and quality-of-life programming for young cancer patients, like the annual sleepover held at the Vancouver Aquarium.