The lodgepole pine and spruce-fir forests of the Intermountain West are reeling under a one-two punch: more frequent and severe wildfires and an epidemic of tree-killing bark beetles.
Jul 18, 2012 9:00 PM By: Gail Wells 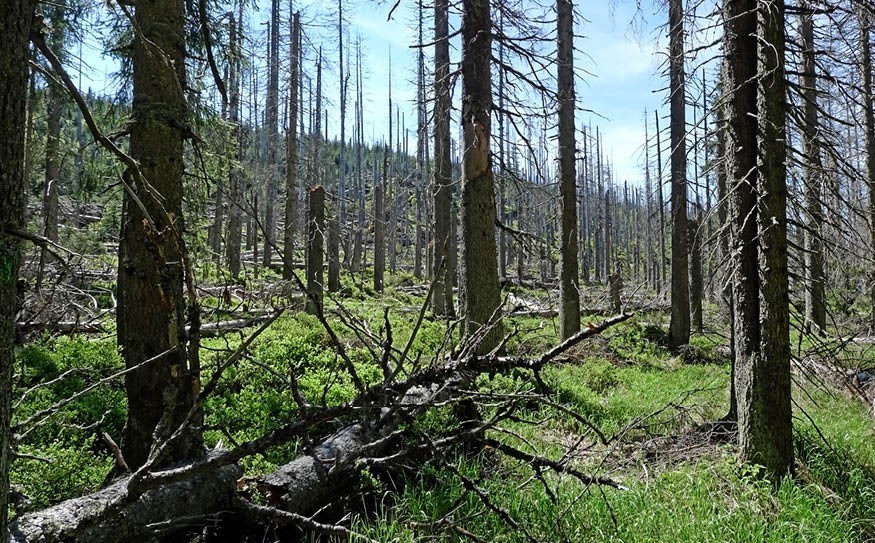 troubled trees Lodgepole pine, spruce and fir trees in the Intermountain West are taking a beating from beetles and forest fires.

The lodgepole pine and spruce-fir forests of the Intermountain West are reeling under a one-two punch: more frequent and severe wildfires and an epidemic of tree-killing bark beetles.

Once-green forests are filled with red dying trees and patches of grey dead ones. From a distance the effect is oddly beautiful. Up close, people often experience a visceral jolt, followed by a sense of alarm: can't somebody do something?

Steve Currey has fielded his share of anxious phone calls. "A few years ago," he says, "we were under a lot of public pressure to stop the beetles from spreading further." Currey is director of bark beetle operations on the sprawling Medicine Bow-Routt National Forest in Wyoming and Colorado. The outbreak there started in northwestern Colorado in the mid-1990s and moved northeast to central Wyoming. "The beetles aren't killing every tree," Currey says, "but they are killing a majority of mature lodgepole pine, and we've lost half our lumber pine, too." More than 116 million acres in the North American Rocky Mountains have been affected. "People are beginning to understand that this thing is too big to stop."

Wildfire and beetle epidemics both have long histories in Western forests. Their patterns have been shaped somewhat by human impacts, but outbreaks, which tend to be infrequent and severe, are driven by larger factors. Scientists believe a warming climate is the main factor behind the West's more frequent severe wildfires, and is also likely amplifying the current bark-beetle epidemic, the most widespread on record. Warmer winters allow beetles to spread into more northerly and high-elevation territory. Beetles reproduce more often during longer warm seasons and more larvae survive winters.

It might seem that fire and bark beetles are locked in some malevolent feedback loop, with fires inviting beetles to devour weakened trees, and beetles creating fuel for future fires.

But "there were surprisingly little data backing up that conventional wisdom," says Monica Turner, a University of Wisconsin landscape ecologist and coauthor of a much-discussed 2011 study that examined links between beetle epidemics and wildfires in the Greater Yellowstone Ecosystem.

The study's findings — that beetle attacks don't increase severe-fire risk, and may in fact reduce it as dying trees shed needles — may sound counterintuitive. But they are in line with more than two decades of research indicating that, while bark beetle epidemics and fire are entwined in complicated ways, one does not necessarily amplify the other.

Yet this recent study — which used a computer model that simulates fire behavior to predict severe fire-risk based on current conditions, unlike most of the previous research, which looked to historic beetle epidemics and fire patterns to unravel the relationship between the two — has drawn sharp criticism, particularly from those who manage fires in beetle-killed forests. Turner and her colleagues say that large-scale removal of dead trees — often proposed to reduce fire risk — is "probably not needed" in lodgepole forests, which dominate the upper montane and lower subalpine zones of the Rockies. Critics counter that the study's methodology and narrow geographic scope don't justify its sweeping conclusion, and that it shouldn't be interpreted as a broad indictment of salvage logging. This collegial wrangle illuminates how messy — yet essential — it is to apply land-management science to management itself. And it raises the question: should we do something with all that dead wood?

Crown fires are typically the severest fires: They spread treetop-to-treetop and burn huge swaths of forest to the ground. Bark beetles attack forests like a slow tide, taking a decade or more to kill most (but hardly ever all) of the trees. Depending on the stage of attack, a beetle-infested stand may contain live trees, dead-but-still-green trees, dead trees with dried-out red needles, and bare, grey dead trees. The risk of crown fire is greatest the first year or two after attack when trees are still standing and there's ample fuel left in the canopy. Turner, coauthor Martin Simard and their team measured and mapped fuels in the canopy, understory and forest floor in beetle-killed and undisturbed forest stands, then fed the data into the computer model. They concluded that a wildfire in a beetle-damaged forest is no more likely to develop into a crown fire than one burning in a green, living stand.

"(Beetle-killed forests) will burn perfectly well," says Turner. "The point is that they will burn no more severely than a comparable green forest." That's because, in this forest type, severe wildfires are mainly driven by climate, not fuel quantity or arrangement.

But some wildfire experts maintain that fuel, and specifically its moisture, is a bigger factor in fire severity than Turner and Simard's results indicate. Missoula, Mont.-based Forest Service ecologists Matt Jolly and Russ Parsons recently found that the foliage of red beetle-killed trees is much drier than living foliage, ignites more readily, releases more heat when it burns, and is more apt to throw burning material into adjacent areas. This seems to explain what Dana Hicks, regional fire management specialist for the British Columbia Ministry of Forests, observed in the mid-2000s, when massive fires ripped through beetle-killed forests near Prince George. These fires, he reports, were as intense as those in a green forest, but much faster-moving, "with double, if not triple, the rates of spread that you get in a green forest."

Turner and her colleagues acknowledge that none of the currently available fire-behavior models account for fuel moisture very well. (It is devilishly difficult to get a computer to accurately simulate a real fire.) But the team maintains that its model was adequate, and that critics overestimate the degree and rapidity of beetle kill and the ensuing accumulation of fuel, leading them to overestimate the severity of future fire. Because of the diffuse character of beetle attacks, they note, a stand as a whole never gets as dry as a single dead tree.

Lodgepole pine is exceptionally prone to crown fire, so it made sense to study whether bark beetles exacerbate that risk. But it's not only dramatic crown fires that worry managers, says Mike Battaglia, a Forest Service researcher in Colorado. A hot surface fire, fed by heavy fuel buildup, "is going to cook the ground and all the regeneration (or seedlings). And if those trees aren't old enough to have put out cones yet, you have a problem."

So what's a forest manager to do? In most of the West, widespread salvage logging is unlikely to become the preferred method for managing beetle kill. It's expensive, and many affected areas lie in hard-to-reach wilderness or other environmentally sensitive places. The key objective for managers in these forests, says Steve Currey, is to protect human life and safety.

At lower and middle elevations, that means removing hazardous trees from campgrounds and along trails, taking out smaller wood from surrounding forest, and working with communities to reduce fuels around homes. At higher elevations, the most effective strategy is probably to do nothing beyond clearing dead trees from popular trails.

Battaglia and Currey also argue that as access and budgets allow, judicious use of salvage logging, mechanical thinning, planned fire, or all three, in beetle-killed areas can reduce the risk of severe fires later on. Such measures can also encourage an uneven forest mosaic of varying ages that's more fire- and beetle-resilient.

Simard and Turner aren't saying that salvage logging is never a good idea, or that it never reduces fire risk. Nor do they recommend allowing beetle outbreaks and wildfires to run their course because they are "natural." But they do believe that managers considering fuel-reduction projects should justify them carefully.

Logging or thinning beetle-killed forests is often advised for the sake of "forest health." But there is nothing intrinsically unhealthy about a beetle outbreak, argues University of Wisconsin entomologist Ken Raffa, even an epidemic-sized one. "Beetles are part of the forest," he says. "They play valuable roles, just as fire does. If we say we're managing the forest to promote 'forest health,' that's not a fair way to say it. If we're honest, we'll say we're managing the forest because we and the beetles are competing for the same resource."

This article was first published in High Country News in May.

More and more Whistlerites finding themselves in crisis
Jul 2, 2020 9:00 AM
Comments
We welcome your feedback and encourage you to share your thoughts. We ask that you be respectful of others and their points of view, refrain from personal attacks and stay on topic. To learn about our commenting policies and how we moderate, please read our Community Guidelines.