The plight of a homeless man who says he was told he couldn't get cancer treatment while living in temporary housing in Victoria highlights the difficulties of finding a suitable home to recover for those who have been on the streets, health and hous
Sep 19, 2018 6:00 PM By: The Canadian Press 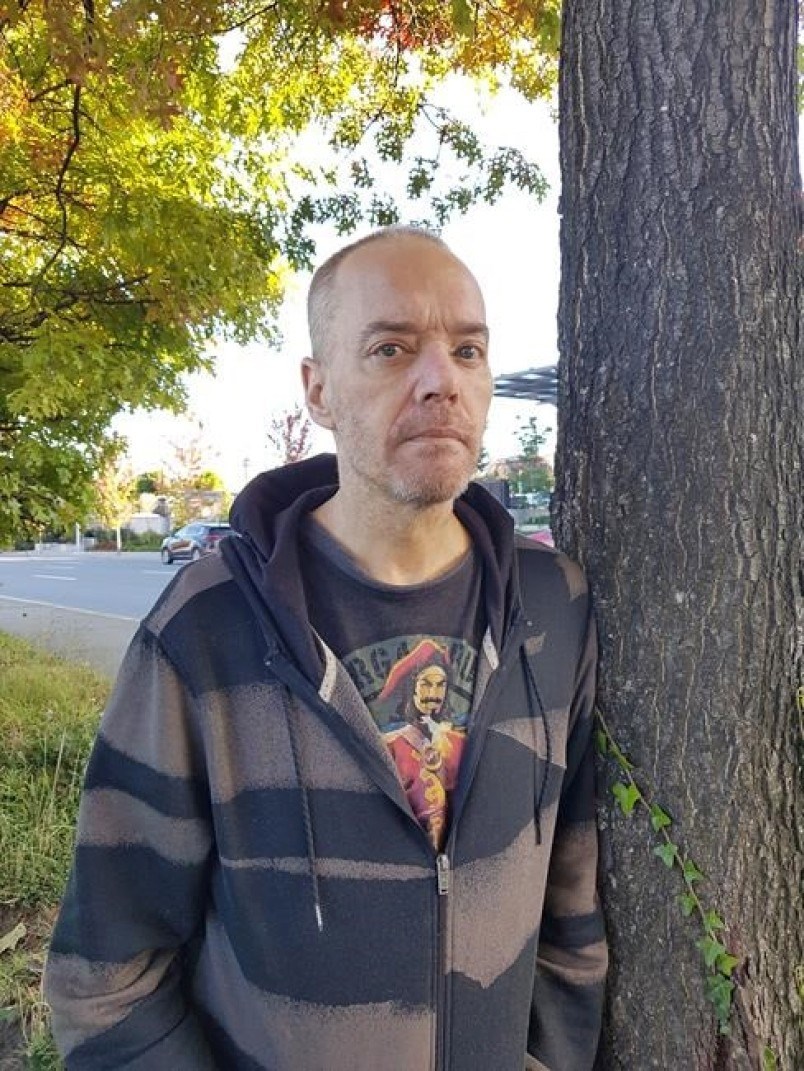 Terry Willis, who is homeless and battling cancer, is shown in Victoria, Monday, Sept.24, 2018. Terry Willis says he's praying for a clean, safe place to live to undergo the cancer treatments he needs after he was denied chemotherapy because he lives in a Victoria homeless shelter. Willis says he's facing his second fight against blood cancer in seven years, but his oncologist won't start chemotherapy treatments because the shelter where he lives in not a suitable recovery environment. The Canadian Press/ Hilary Marks

The plight of a homeless man who says he was told he couldn't get cancer treatment while living in temporary housing in Victoria highlights the difficulties of finding a suitable home to recover for those who have been on the streets, health and housing advocates say.

Terry Willis says he can't fight non-Hodgkin lymphoma while living in the Johnson Street Community building for homeless people. The 50-year-old said he is facing his second fight against blood cancer in seven years, but was told his oncologist won't start chemotherapy treatments because the building is not a suitable recovery environment.

"I hope and pray that I do get a clean place to live and the doctor will initiate the chemotherapy," said Willis. "I'm not ready to give up."

Willis said he was dismayed when he first heard the decision.

"I thought about it and I agreed, he's right," he said. "My immune system will be literally shut down. I can't fight off anything and you know, they say you can't drink the water in there. You can't even have a clean shower."

Island Health said it cannot comment on individual cases because of privacy concerns, but in a statement the health authority said "we can confirm a multi-agency team has determined that 844 Johnson in Victoria has appropriate measures in place to support clients who require chemotherapy."

The B.C. Cancer Agency said it also backs the position that the Johnson Street Community building is suitable for chemotherapy patients. B.C.'s Housing Ministry said in a statement it is working with "Island Health to explore all supportive housing options that would be suitable."

It wasn't immediately clear on Tuesday whether the positions of the health authority and the cancer agency mean Willis will get chemotherapy.

The Johnson Street Community building was purchased in 2016 by the British Columbia government to provide housing for homeless people who erected a tent city on the front lawn of Victoria's court building. The former care home provides accommodation for 147 residents. Its supports for residents include four mental health workers, an on-site manager, two home support workers and a health clinic. Meals are provided twice daily and the building has an overdose prevention site.

Grey Showler, health director at Victoria's Cool Aid Society, said Willis's health situation reveals gaps in services available to vulnerable people who require places to live that will allow them to recover from serious health issues. Cool Aid is trying to find funding to convert two former family apartments into recovery homes for people getting over illnesses, he said.

"If you are couch surfing or live in a place that maybe the home-care nurses can't get to, or if you are living in your vehicle or you're in the shelter, it's difficult," said Showler. "People when they go to the hospital and they are unwell, not everybody walks out of the hospital 100 per cent."

Prof. Kelli Stajduhar, who specializes in end-of-life care for vulnerable people at the University of Victoria's school of nursing, said Willis's case shows the need for broader care options.

"The story of Terry Willis is the story we have heard over and over again," she said. "There needs to be more help."

Stajduhar said she was recently part of a three-year research project that followed the health issues of 25 homeless and vulnerable people in Victoria facing health struggles at the end of their lives.

The Portland Hotel Society, which operates the housing facility where Willis lives, said in a statement it is working with Willis and his doctors to facilitate his treatment.

"We appreciate the need for designated facilities that can best support expansive service delivery and medical oversight for rigorous treatments, such as chemotherapy," it said.