No injuries reported; Nlháxten/Cerise Creek Conservancy is closed
May 17, 2019 8:34 AM By: Braden Dupuis 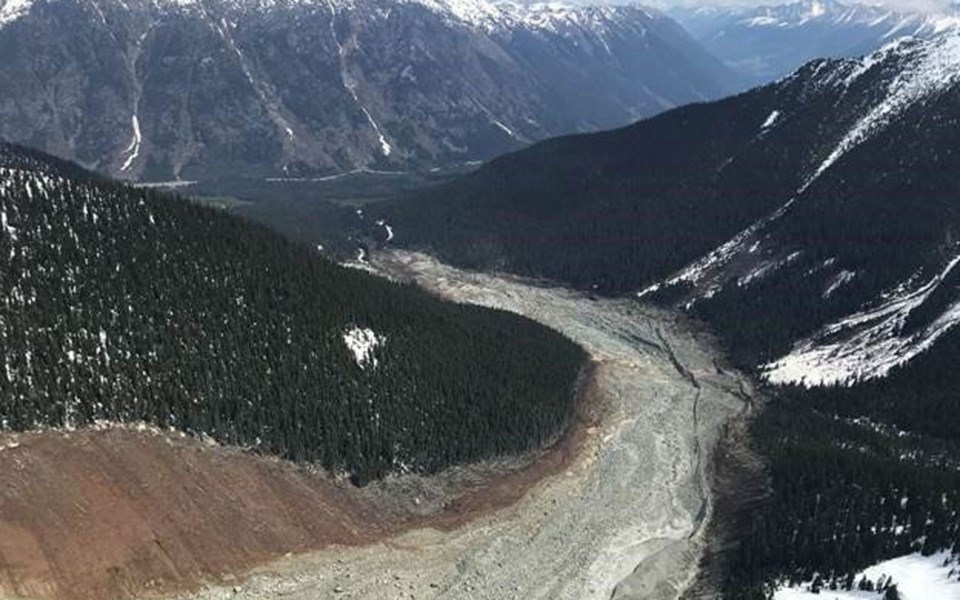 LANDSLIDE A photo taken after the first of two landslides on Joffre Peak this week. Photo courtesy of BC Parks

BC Parks is investigating and the Nlháxten/Cerise Creek Conservancy is closed following a second landslide on Joffre Peak.

Both slides occurred on the northeast face of Joffre Peak in the Cerise Creek Conservancy.

BC Parks has not received any reports of injuries or missing persons from either of the slides, and has closed the Cerise Creek trailhead to Keith's Hut, according to a spokesperson.

The first landslide occurred Monday at 7:40 a.m., affecting the Cerise Creek area and ending on the flats just south of Cayoosh Creek and Highway 99.

"Debris appears to have spanned 500-850 metres in width and travelled a total distance of roughly 5.2 kilometres," the spokesperson said.

"The second slide occurred Thursday, May 16 on the same side of the mountain. There does not appear to be any threats or risks to Joffre Lakes Park associated with these events."

While landslides are common in steep, mountainous topography, in this case, the failure was likely "preconditioned by the amount of alpine permafrost melting" seen in recent years, said Brent Ward, co-director of the Centre for Natural Hazards Research in the Earth Sciences Department at Simon Fraser University.

"With the summers getting warmer, we're starting to see degradation of the permafrost, and this landslide, the initial landslide, is pretty strongly associated with that really high heat wave we had last week, where we had above-average temperatures," Ward said.

With rapid snowmelt, water trickles down into rock fractures and builds up along some of the "failure planes," Ward said.

If there's enough pressure, it can weaken the rocks and trigger a failure.

With hotter, drier summers in the long-term forecast, can we expect to see more of these types of slides?

"That is what people are trying to research," Ward said.

"They're trying to see if there is an increase in frequency, and part of the issue we have is these things can happen in pretty remote areas, and we don't know about it."

That being said, "yeah, we're concerned," he added.

"It's kind of like a cascading hazard situation, where we have global warming, and that can trigger other types of hazards.

"Here, people are arguing that we're starting to see an increase in these high-alpine landslides, again, due to permafrost melting."