First public-private partnership for BC Transit to reduce tax burden
Oct 26, 2012 5:00 AM By: Andrew Mitchell 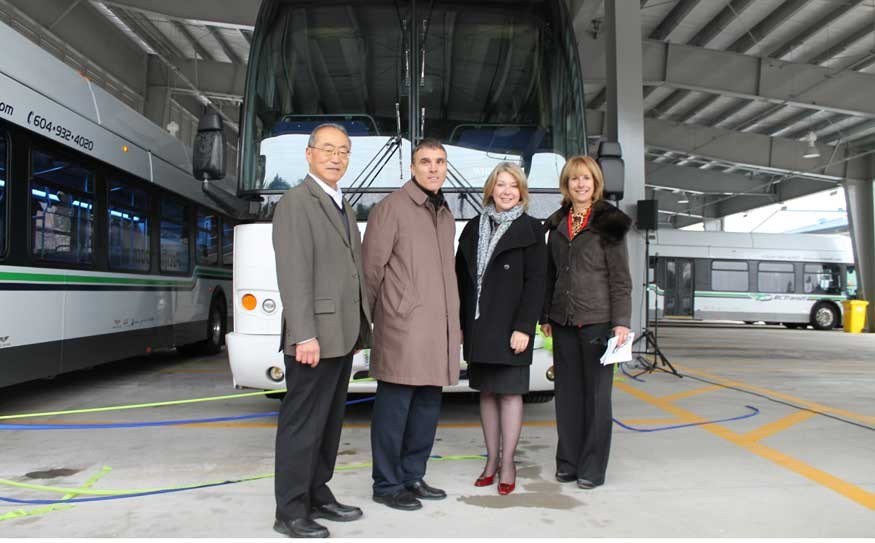 Six of the 27 extra bays at the new Whistler Transit Centre have a new tenant starting Nov. 1, with BC Transit reaching an agreement with Pacific Coach Lines (PCL) worth close to $50,000 a year. The contract includes the six parking bays plus some office space, and in the future that could be expanded to include other services like the bus wash facility, the maintenance bays and refuelling - something PCL is interested in pursuing.

Manuel Achadinha, president and CEO of BC Transit, said the idea of renting out space at the facility - which includes 50 covered parking bays for Whistler's current fleet of 23 buses - has been discussed since the facility opened before the 2010 Winter Games. The negotiations with PCL having been ongoing for roughly six months, and will continue as the partners in the facility - which includes the Resort Municipality of Transit and the operator Whistler Transit Ltd. - evaluate the partnership.

"We want to start small and focus just on the office and the parking," he explained, adding that the goal was to funnel revenues back into transit while reducing the burden for taxpayers.

"We've looked around and there's a lot of interest from other bus companies that are looking to see how this deal goes and how the private-public partnership works. I know it's something that Pacific Coach Lines is excited about... It's meeting their needs for secure parking and some place they can do paperwork, and we're looking at the other things as well like the bus wash and service bays."

All revenue from the deal will be split according to the current funding formula, where the province pays 47 per cent of the operating costs of the transit system and the municipality pays 53 per cent.

While the deal with PCL is not for a lot of money - the total operating budget for the Whistler service is $11.4 million a year - Achadinha said it was "symbolic" and felt strongly that it was only the first of many partnerships for Whistler and other BC Transit communities that have facilities they can rent out to other operators.

Transportation and infrastructure minister Mary Polak was in Whistler for the announcement on Friday, Oct. 26, and said that the partnership demonstrates the province's commitment to meeting all 18 recommendations of a recent BC Transit review.

"We asked how we can improve the working relationship between BC Transit and communities and one of the things to come out of that was the need to focus on partnerships,' she said. "Today, we're focusing specifically (on the recommendation) on exploring new and innovative ways to fund transit without putting more pressure on communities. The question was what was the best possible use of the public investment in the Whistler Transit depot."

Whistler Mayor Nancy Wilhelm-Morden called the public-private partnerships "an innovative way of relieving Whistler taxpayers of the burden of funding transit, and in meeting the needs of several companies."

She pointed out that the facility was built for a 40-year lifespan, which is why the number of bays is so much larger than Whistler's current fleet. She hopes that other transportation companies will soon join PCL, cutting costs for the facility while at the same time freeing up spots in the day skier lots. "There's a large number of bus lines carrying guests up here, and so of course the hope is more will sign on," she said.

Dennis Shikaze, president of PCL, said his buses currently bring 120,000 visitors per year from Vancouver International Airport and downtown Vancouver, and that numbers are growing. The facility is exactly what they needed.

"BC Transit first approached us earlier this year and we toured the facility in the summer," he said. "We felt that this was a place that fits our needs perfectly."

Shikaze said that discussions will continue, but PCL is very interested in expanding the contract to include the wash bay, service bays and refuelling. "We are looking at that, and would like to be able to do that if possible," he said.