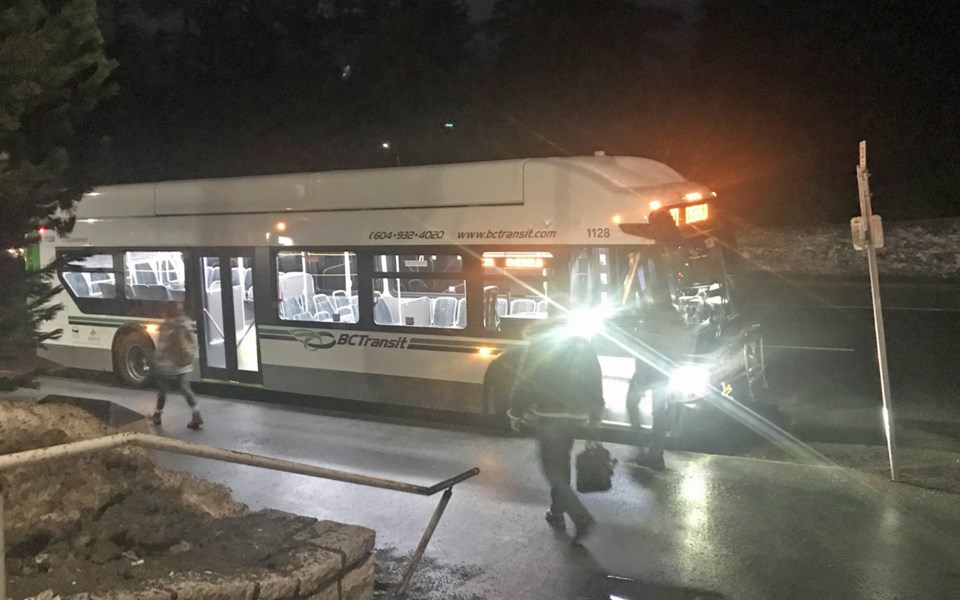 Following a public outcry, BC Transit has reversed course on its decision to suspend late-night service this summer. TWITTER / WHISTLER TRANSIT

BC Transit will maintain late-night bus service this summer after a petition signed by nearly 1,000 Whistlerites urged the operator to reconsider.

Based on lower passenger volume during the COVID-19 shutdown, BC Transit was planning to reduce late-night service beginning July 1, which would have impacted the No. 5 Upper Village Benchlands, the No. 7 Staff Housing, the No. 20 Cheakamus and the No. 30 Emerald via Alpine routes.

Following an online petition started by late-night worker Benton Rider that, at press time, has garnered 996 signatories, as well as several letters written to council from the restaurant sector, the 11th-hour decision was made to keep service levels as is for the time being.

“We received a number of very thoughtful and reasonable requests, and, of course, the petition got nearly 1,000 signatures, and so it really kind of gave us pause to go back to BC transit and Whistler Transit,” explained Councillor Jen Ford, council’s appointee to the Transit Management Advisory Committee. “So we had … an urgent meeting on Tuesday, and we were able to not cut back the service, so the service will continue as was scheduled.”

The decision to reduce service was made in May, “when we were still in Phase 1, and we didn’t expect businesses to be open,” said Ford. But with B.C. entering Phase 3 of its recovery plan, Ford said the municipality wanted “to support bus ridership and people that are working to keep Whistler going, and to reopen our economy, an so … we see [this as] a big piece of keeping people safe, not walking on the highway, and really using transit safely and efficiently.”

With a number of disturbing incidents reported to police on the Valley Trail over the years, Laurie Hannah, the Whistler Women’s Centre community program manager, had worried that suspending late-night transit would disproportionately impact Whistler’s younger population—and women in particular—at a time when domestic violence and sexual assault are already on the rise.

“It’s just putting a whole population at risk, and women as well,” she said in an interview earlier this week. “There are just too many elements that I think they haven’t thought through.”

Ford credited Rider and the wider community for speaking up. “I think it’s nice to recognize when people put forward a really good argument and a very reasonable request,” she said of Rider’s petition.

-With files from Braden Dupuis