Removal of dead wood from affected areas could also remove fuel for wildfires
Sep 24, 2018 7:00 AM By: Hina Alam / The Canadian Press 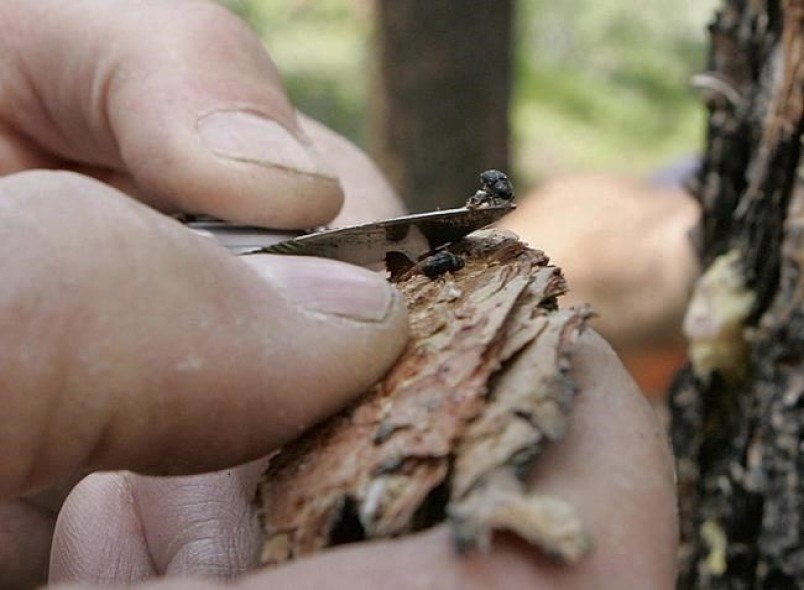 BEETLES BURNT A Mountain Pine beetle or bark beetle is seen on the tip of forester Cal Wettstein's knife during the examination of trees in the White River National Forest near Vail, Colo., in this July 5, 2005 file photo. Clearing or burning beetle ravaged forests may be costly but could mitigate against the kind of massive wildfires that have been seen in British Columbia the last two summers, say researchers. Photo by THE CANADIAN PRESS/AP-Ed Andrieski

VANCOUVER - Clearing or burning beetle ravaged forests may be costly but could mitigate against the kind of massive wildfires that have been seen in British Columbia the last two summers, say researchers.

They say a large proportion of the forests that burned this year were affected by the mountain pine beetle about a decade ago.

But, he added, the affected area is huge and it would take money and effort to tackle.

Perrakis said trees that were affected by the mountain pine beetle but still had viable wood were sent to mills to be turned into boards and paper. What is left now is partly decayed or dead wood.

Prescribed burns are another option that is already used by neighbouring Alberta, he said.

But these options come with ecological consequences, such as soil degradation and the introduction of invasive species caused by the widespread use of machinery in forests. Dead wood can also be used as habitat for many organisms in forests, so while removing it can help make forests safer from fires, it can also reduce the health of these fragile ecosystems as they adapt to the death of the overstorey trees, Perrakis said.

And then there is the introduction of smoke in the air in spring or fall when the weather is mild and prescribed burns can be conducted.

"There are ways to tackle the problems on our own terms rather than waiting for these very dangerous and uncontrollable fires to occur," Perrakis said. "So, there are options, but they are not simple, and they are not risk free and not cheap."

In B.C., about 40 to 50 per cent of the area that burned this year was ravaged by the mountain pine beetle in the early 2000s, he said.

"The past two years the big, big wildfire seasons have affected disproportionately the areas that were mountain pine beetle affected."

"The mountain pine beetle pretty much ate itself out of house and home in British Columbia," he said.

The B.C. Ministry of Forests said there were some areas of overlap between the wildfires and beetle-attacked forests. In 2017, it's estimated that two-thirds of the fires occurred in green stands and about one-third in dead stands. The ministry said while wildfire spreads more quickly through dead beetle-attacked trees, scientists who study wildfires say more research is needed on it.

Perrakis said wildfires spread slightly faster in forests where the mountain pine beetle has laid an area to waste, simply because there is more wood and fuel on the ground.