Pro patrol, RCMP on the mountain to encourage responsible behaviour
May 17, 2017 6:00 PM By: Lynn Mitges 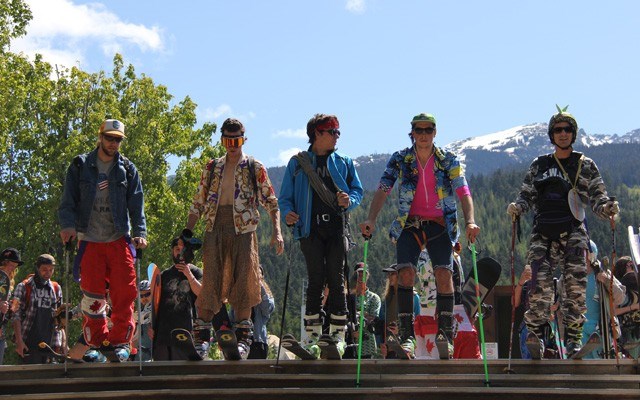 That message is being broadcast loud and clear by Whistler Blackcomb (WB) as skiers and boarders mark the end of the season May 22 on what is traditionally known as Gaper Day.

The urge to misbehave and act irresponsibly should be shelved, said officials at WB, because the risk of losing your summer mountain-bike pass or next winter's ski pass is too great.

"It's all about moderation," said WB's Director of Mountain Operations Doug MacFarlane. "It's been a fantastic year. Be respectful of everyone who's taking part — families and visitors. We've had issues over the years and it's OK to celebrate, but we don't condone drinking on the mountain."

Four members of Whistler RCMP will also be on the mountain in ski gear to police the action as well.

To help encourage everyone to party responsibly WB has organized an end-of-season party at Merlin's, which starts at 2:30 p.m. The "Be like Jerry" Gaper Day Party will see DJ Billy the Kid spinning and prizes, such as three season passes to the bike park and a pair of Rossignol skis, given away. To enter the draw for the bike park passes you must put your name in between 2:30 and 3:30 p.m.

The best Jerry costume could win you the Rossignol skis. A frozen T-shirt contest will also be held.

"We've had issues over the years," MacFarlane said, adding that an increased patrol and security presence will be on hand to ensure safety for everyone.

He also wanted to remind people that even though the mountain is closing it will still be a busy place with maintenance and preparation work for the summer and beyond getting under way. As well, skiers and boarders are reminded to stay in bounds as conditions are variable.