Garbage and human behaviour still the primary issue
May 2, 2008 2:54 AM By: Clare Ogilvie 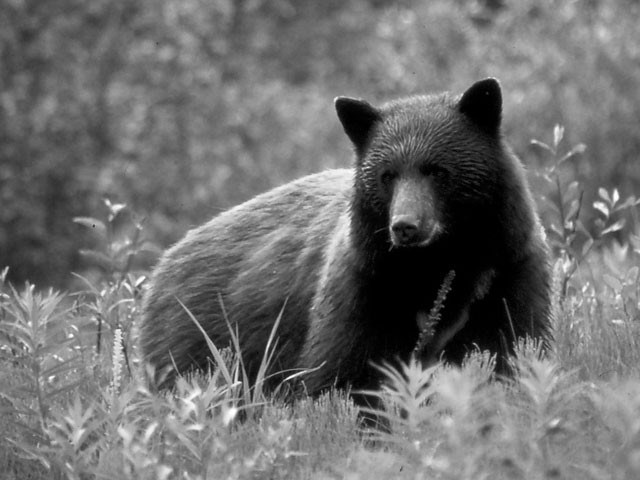 Jeanie Bottled? One of Whistler's most prolific mother bears may be given birth control to prevent future human-bear conflicts. Photo by Michael Allen

Everybody in Whistler knows Jeanie.

The large dark brown bear with the tan V on her chest and the many cubs she has born are followed like a soap opera in the columns of the local papers.

And the teenage bear has even starred on the silver screen when the BBC used her for their documentary In the Company of Bears.

Perhaps that is why an idea under discussion by the Get Bear Smart Society of Whistler to put Jeanie on birth control is raising so many eyebrows.

“I don’t think the risk is that great and I think it may save her life in the long-term,” said the society’s executive director, Sylvia Dolson.

The birth control, known as immunosterilization, is given by injection and lasts between one and five years. If administered it would be the first time in Canada it has been used on a wild bear.

Dolson said it is being considered for Jeanie because whenever she has cubs she comes into town in the fall to forage in garbage and gets herself and her cubs into trouble.

The reasons she ventures into the resort are varied. It can be lack of food on the mountain, competition from other bears, and competition for her grazing area from human activity.

Last year during bear season it wasn’t unusual for conservation officers to get 20 to 30 calls a day about bears, and they destroyed 13 conflict bears. Numbers that high hadn’t been seen since the 1990s.

This is not an end Dolson wants for Jeanie or her cubs, or for any bear for that matter.

“She is only getting into trouble when she has cubs and other times she stays on (Whistler) Mountain, so perhaps this would work to keep her out of conflict,” said Dolson.

“This would be an experiment on one individual bear based on a known conflict history of that individual. I want to make clear that it is not something we are thinking of on a population level to control conflict. It is a one-off experiment.”

Dolson has brought the idea to the B.C. Ministry of the Environment through a bear-working group. Ministry spokeswoman Kate Thompson said: “It is an experimental vaccine and we don’t have enough information on it in its use on bears so we wouldn’t be able to endorse its use.

“But we are certainly going to be interested to see what develops with the research in other jurisdictions.”

But local bear expert Michael Allen who has followed Jeanie — named after his Scottish grandmother — since he came to Whistler 15 years ago is fiercely opposed to the idea of giving her birth control and sees it as a “cop-out” by the municipality so it doesn’t have to deal with the issue of garbage.

“We are not dealing with the root of the problem, garbage, and I am losing patience with the system,” said Allen who has been studying black bears for 23 years.

“ There is no way I will ever support manipulating bear behaviours. We fully know what the problem is and we are knowingly not addressing it.

“Are we saying, ‘Welcome to Whistler where we manipulate our bears so they are not a problem.’ That is ridiculous.”

Allen believes Whistler owes it to Jeanie to come up with another solution to manage her behaviour. After all, said Allen, she has been showing the community for 14 years what expansion on the mountain — a bigger mountain bike park and new Olympic runs — and growth in the valley bottom is doing to bears.

“Jeanie is an incredible source of information about how a mother bear lives in a dynamic landscape with people,” said Allen, adding that she has had nine cubs from five litters.

“She is showing us how she had changed throughout the years in response to us changing her environment, so to start changing her biology is almost criminal.”

Dolson agrees that the municipality needs to do more to address its management of garbage. The society is auditing private garbage disposal in town and conducting a landscape audit with a view to getting rid of any plants that might attract bears down into the valley. Businesses or strata’s not disposing of garbage securely are being reported on and followed up on said Dolson.

“The garbage is the number one problem without any doubt whatsoever,” she said.

“We allow that it is very difficult to change people’s behaviour and that no matter how hard we try there will always be some amount of garbage or some other attractants available to bears.”

Through the bear working group the society is working with the municipality on the garbage issue.

The bottom line is if Whistler wants to start trying to address garbage in the neighbourhoods more money must be spent. That’s a challenging issue for a council in a cash crunch.

Dolson would like to see a portable garbage container move on a schedule from neighbourhood to neighbourhood as a pilot project this summer and fall to see if that can impact the number of bear problems in subdivisions.

“We have a bear-proof collection system but it is all of the activity that happens outside of the system that is a failure and that really lands on the shoulders of personal behaviour,” he said.

“Bears are very, very clever — that much we know…”