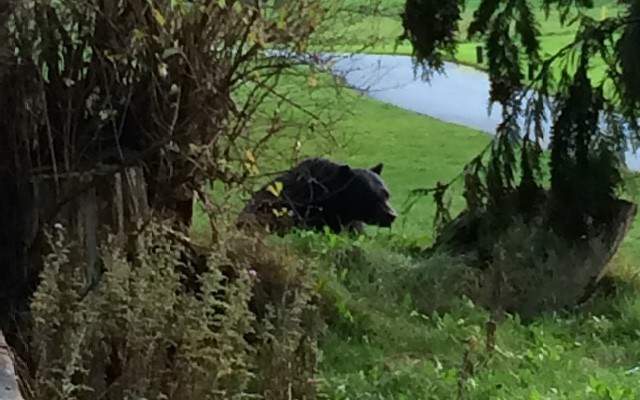 bear death This large male bear, known to locals as Charlie, was destroyed after repeatedly breaking into a garage in Whistler Cay Heights. photo by clare ogilvie

Questions are once again being raised around Conservation Officer Service (COS) policies after another Whistler bear was killed on Friday, Nov. 18.

The bear was captured in Whistler Cay Heights and eventually destroyed for repeatedly breaking into a garage.

It's the fifth bear destroyed due to human conflict this year.

"It broke into the same garage four times," said Tim Schumacher of the COS.

"Once they obtain a food reward in a specific place, they just keep returning to that same place and keep doing that damage."

The bear was apparently trying to access garbage inside the garage.

Schumacher couldn't say how the bear first accessed the garage — whether it was a door left open or an open window — but once the bear knew the garbage was inside, it kept coming back.

"I don't know if you could say that (the homeowner) didn't do anything about the garbage. The bear already knew that it was there and it kept breaking in," Schumacher said, adding that the bear was destroyed due to concern over public safety.

"With a bear like this we couldn't take any chances. The next time it could break into somebody's home or be stuck inside the garage with somebody and seriously injure them."

But there were other preventative measures that could have been taken, said Sylvia Dolson of the Get Bear Smart Society (GBS).

In the case of a bear breaking into someone's shed some years back, an electric fence was deployed and worked wonders, Dolson recalled.

"When the bear came back he got a shock, and never ever returned to that house, and then the people said 'OK, come and get your electric fence, because we're not having any more incidents... we saw the bear get shocked and that was the last time we saw the bear,'" Dolson explained.

"So those are the preventative kinds of things that can be done by the COS."

But there should never be any reason to kill a bear, Dolson said.

"COS policy needs to change with the times. We're becoming a more enlightened society, and in my view, killing a bear is not an appropriate action in that particular instance, or in other instances," she said.

"I've made that comment many times before. We (GBS) don't support the current bear response matrix, and we provided our input to that, but obviously it wasn't taken into account."

The Resort Municipality of Whistler has also provided input into the bear response matrix in the past, said Mayor Nancy Wilhelm-Morden.

If people would like to see things done differently, the rules are set provincially, she said.

"The local guys can take our comments, and they do, but ultimately that matrix is set in Victoria."

The resort has its work cut out for it in educating the three million visitors who pass through every year, "but quite frankly, it's the full-time population who tend to be the culprits when bears are killed, for inadequate disposal of garbage, for not dealing with bear attractants properly," the mayor said.

"So we really do need to keep up the efforts to inform everybody that it's the responsibility of everyone to ensure that they're doing what they can to avoid bear-human conflict."

As long as the bear-response matrix is set up the way it is, public education is the main tool for reducing conflicts — but public outrage can be useful too, Schumacher said.

"We want people to be upset when a bear is destroyed, because we're upset," he said.

"We're upset because, for one, we don't want to have to destroy a bear, and two, I got into this job to protect wildlife, but there are situations where you can't just let a bear continue to break into home after home, right?

"People get upset and change happens, and that's what we want."