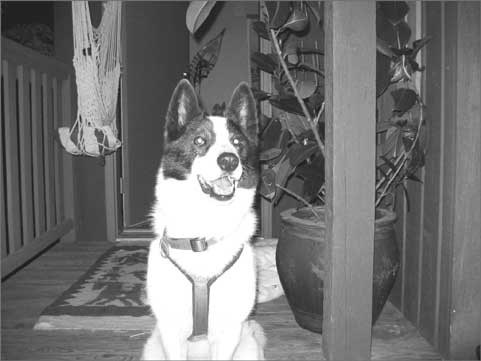 Just having his nose on the team is a tremendous asset - Sylvia Dolson, photo by Alison Taylor.

An innovative 300-pound black bear had no idea he picked the wrong dumpster on Crabapple Drive to forage for food.

To him this was just an easy target. The dumpster was in a brand new "bear-proof" shelter complete with a concrete pad and a metal door. But the side door had not yet been installed and was leaning against the back of the shelter – an open invitation to a curious bear.

Unbeknowst to this bear, however, bear biologist Lori Homstol was on her way to throw out some garbage. And just around the corner Homstol’s black and white dog was lying on their deck.

This was Sisko’s day off, but when you’re a Karelian Bear Dog in Whistler, it would seem your work is never done.

As soon as he heard his owner trying to move the bear away, Sisko rushed to the site and promptly launched himself at the bear, who was surrounded by a pile of garbage he had pulled from the dumpster.

This is just what seven-year-old Sisko lives for; it’s what he has been bred to do.

Barking ferociously, darting around the bear, Sisko managed a few good bites and he continued to hold his ground with the bear that outweighed him by 250 pounds.

The surprising thing, said Homstol, is the bear didn’t back down easily.

"I was surprised a little at how determined that bear was to stay on his garbage."

Trained for these situations, and knowing she must give the bear an exit route, Homstol grabbed her snow scraper from her car, hoping the bear would associate the long shape of the scrapper with a rifle, used in past encounters with the conservation officer. It did the trick. With dog and handler upping the ante and letting the bear know they weren’t going to give in, the bear reconsidered his ground. As he ran into the woods, Sisko stayed on his tail, giving him one last bite for good measure.

Though fierce in his work, to see him at the end of a long day in the field, Sisko is just like an ordinary pet, stretched out quietly on his deck. An ordinary dog, in many respects, but with extraordinary guts when it comes to squaring off with bears.

One word from Homstol and Sisko is on his feet, ears perked, body tensed, eyes scanning his surroundings looking for a job to do.

To the knowing eye, his distinctive black and white coat and his curled tail reveal his brave background.

Karelian Bear Dogs were bred in Finland for hunting bear and moose and other aggressive game.

This bear dog is part of the small team used in the Whistler Bear Aversive Conditioning Research Project.

"Just having his nose on the team is a tremendous asset," said Sylvia Dolson, executive director of the Get Bear Smart Society.

Sisko can help track bears in the bush, and is particularly useful in locating those bears without radio collars.

When it comes to capturing a bear and giving him a hard release to associate humans as a threat, Sisko provides an added exclamation point to the rubber bullets, firecrackers and bear bangers used by humans chasing the bears into the bush.

And this working dog has become a bit of a celebrity around his neighbourhood in Whistler Cay.

He was at work again days after the first dumpster encounter when the determined bear returned, sniffing out another easy dumpster target. This time Sisko helped Homstol move the bear off his plunder and tracked him through the neighbourhood.

But Sisko can’t watch all the dumpsters every day and night.

The best solution, said Homstol, is to make the attractants less available.

Members of the Get Bear Smart Society will be making a presentation to Whistler council Tuesday night addressing the issue of bear attractants in the resort.