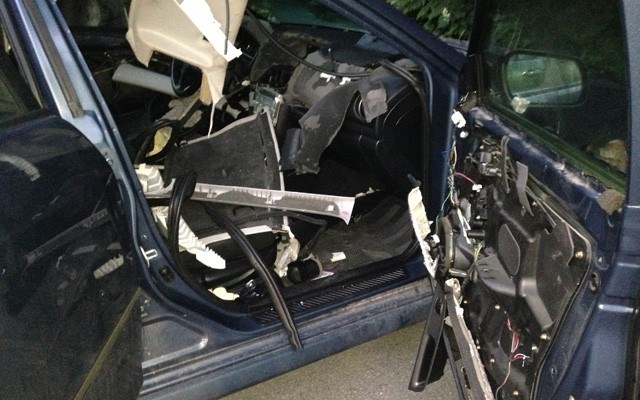 BEAR BREAK-IN Even a locked trunk isn't safe from a hungry bear, especially during what conservation officers are calling "a critical time" when Whistler's bruins don't have the luxury of a healthy berry crop. A car that was damaged by a bear last year is pictured above. Photo submitted by the Conservation Officer Service

Another bear was killed in Whistler Tuesday, Oct. 20 after it broke into a locked vehicle.

Looking for food that was locked in the trunk, the adult male bruin smashed the car window and ripped through the backseat of a car parked on Blackcomb Way.

"We’re not talking about a bear just opening a door and accessing a wrapper, but a bear that’s spending a lot of time in the vehicle and creating a lot of property damage," said conservation officer Simon Gravel. "(The bears) are very, very hungry and they will be persistent."

The bear was not tagged and its history of conflict was unknown to the Conservation Officer Service (COS), although Gravel said it had accessed garbage around the village in the days leading up to the break-in and had been hazed by officers several times.

"That level of property damage, in addition to the bear’s behaviour, the difficulty to haze him and his persistence to access food in the village and surrounding areas met the threshold ... to kill him," explained Gravel.

A total of six bears have been killed by the COS and RCMP during a season where Whistler's bruins are struggling to fatten up before hibernation with a weak autumn berry crop.

The incident was a stark reminder of how important it is for the public to go to extreme lengths to secure possible attractants.

"We’re asking people to be extremely diligent in securing food and garbage in a place that’s impossible to access," Gravel urged. "A trunk in a vehicle is not a secure place and can lead to extensive property damage and a bear’s destruction."

To arrange a ride, or for more information, visit www.bearsmart.com/4theloveofbears.

More and more Whistlerites finding themselves in crisis
Jul 2, 2020 9:00 AM

LETTER: Adventuring differently in Whistler
Jul 1, 2020 3:40 PM
Comments
We welcome your feedback and encourage you to share your thoughts. We ask that you be respectful of others and their points of view, refrain from personal attacks and stay on topic. To learn about our commenting policies and how we moderate, please read our Community Guidelines.