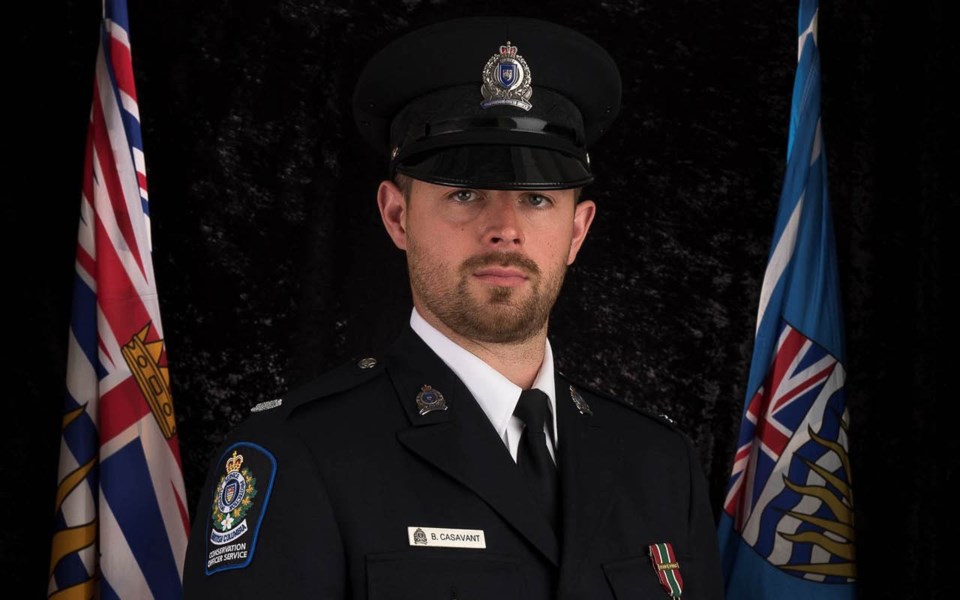 In uniform Bryce Casavant served as a BC conservation officer from 2013-2015. PHOTO submitted

A common criticism against academics is that they lack real-world experience with what they study. Not so for Bryce Casavant, a former conservation officer turned academic.

In 2015, Casavant made international headlines when he refused to euthanize two black bear cubs on Vancouver Island. By defying a so-called kill order, he became a darling of a growing contingent of British Columbians that feel conservation officers are too quick to kill and need to rethink their approach to animal control.

Casavant was suspended for his decision, leading to a petition (signed by over 300,000 people) asking him to be reinstated. Famous people even got in the mix, with comedian Ricky Gervais, tweeting , "Reinstate this honourable man." Following a legal dispute with the province, Casavant was transferred to a position with the Ministry of Forests, where he now works, and the province agreed to fund his graduate studies. As a doctoral student at Royal Roads University, his work is now squarely aimed at his old employer, which he feels is operating in a misguided way that damages public trust.

In 2017, trading on his popularity, Casavant decided to run for public office, running against the BC Green Party leader, Andrew Weaver, in Oak Bay-Gordon Head. NDP leader John Horgan referred to him with as a "bear saviour" at an event in the lead-up the election.

Casavant's new report, "Law Gone Wild: A descriptive analysis of public confidence levels in B.C.'s wildlife enforcement agencies," takes aim at a conservation service he sees as lacking accountability. Drawing on a survey by polling firm Insights West,  which found that over 75 per cent of respondents had "little confidence" in the province's conservation officer system, Casavant is calling for third-party oversight and better training when it comes to non-lethal methods of handling wildlife.

"An armed and uniformed law enforcement agency must be treated as such, with appropriate external and third-party reviews of policies and actions, and independent investigation when killing of animals to resolve conflict goes against what members of the public expect of their government," said the report.

In an interview, Casavant said that conservation officers who kill black bears are damaging public trust. "When the people don't trust the officer or the agency responding — they don't call and report," he explained. And that, in turn, can lead to dangerous situations.

Casavant isn't completely opposed to lethal force, saying that it is "justifiable and reasonable" when animals pose a risk to humans, properties, or livestock. He thinks, however, that officers are routinely exceeding the "scope of their authority" and that more non-lethal avenues should be encouraged.

Sara Dubois, an adjunct professor at the UBC faculty of Land and Food management, agrees. She thinks of Casavant as a "whistle blower" and would like to see conservation officers brought under the Police Act, something she feels would bring the oversight he's after.

"I think that would be a really good transparency move," she said, adding that conservation officers would have to be sworn in and take training at the Justice Institute. "The public wants to understand why decisions are being made to kill these animals — is it because they don't have resources to use non-lethal methods or aren't trained in non-lethal methods?

"When animals are being killed — and they're not affecting the lives of people or livestock — that's really concerning."

Dubois points to a recent court case as an example. In December, the B.C. Supreme Court struck down a request for a judicial review of an incident in which a bear cub was killed by a conservation officer in Dawson Creek. In his ruling, Justice Gary Weatherill sided with conservation officers, saying they have the discretion and authority to kill wildlife, including cubs that might not pose a threat.

"It really seems like there is no limit on what conservation officers can kill," said Dubois in reference to the case. "The judge kind of ruled that they can kill baby animals that are uninjured."

For Casavant, that discretion is troubling and needs to be thought critically about. Public trust is an important value and is "directly related to how (an) officer behaves in the field," he said.