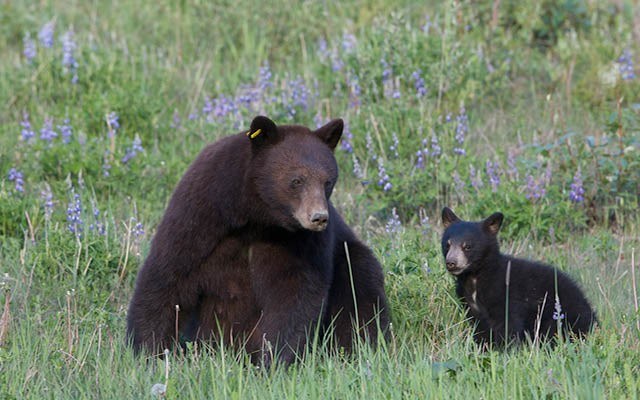 SPring has sprung At least 3 male bears are active around Whistler so get you bird feeders in and secure your garbage/recycling. Brown mom-Amy and now, yearling will emerge in 2-3 weeks after most of the males, to use the green up areas at the Chateau Golf Course, Lost Lake, and Spruce Grove Park. When males start to "bother" mom in June, she'll break up the family and begin her next breeding cycle for her 6th litter of cubs in 2015. She's at least 13 years old. Photo by Michael Allen

Last summer and fall of 2013 saw one of the best food supply seasons for black bears in my 20 years of observations at Whistler.

Largely, local climate patterns are the force behind the production of the bear's berry crop. The milder spring, intense heat of summer, and scattered days of rainfall that prevented plant stress, gave rise to an almost perfect berry crop last year.

Pollination at berry shrubs beneath forest canopies was the highest I've seen, with berries ripening deep into semi-closed forests. This actually allowed bears to forage berries and subterranean ant/bee colonies during several days of 25C-plus while remaining relatively cool.

Bears will feed on any type of berry or fruit but, Vaccinium spp. (blueberries/huckleberries) and Sorbus spp. (Sitka Mountain-ash) are the most abundant and important. If these berries fail, life gets risky and stress increases as some bears explore alternative food sources, often taking them closer to people, garbage, and vehicles.

Since 1995 I have used the Whistler Blackcomb ski area to gain insight into the dynamics of bear abundance at Whistler. In 2000 I started including the Chateau Golf Course as the primary window of study as well. Bears are sighted, photographed, identified and counted during systematic bear viewing tours, focal surveys, and remote camera-trapping along bear trails.

Identified bears become "known" bears with maintained profiles of behavior that help describe continuing changes in their population status. The ski area has supported mostly females and attracted mostly male; that means females are resident and males are resident in a broader sense to all of Whistler, as they move in and out of the ski area and easily have annual movements up to 100km2.

Nearly all of the males, young and old, begin spring by grazing the three golf courses. By early May, adults move up into the ski area searching for potential mates and marking their expanding ranges.

The ski area supports the highest concentration of breeding female ranges, so alpha- (dominant) and beta- (challengers) males will always include those ranges into their spring movements.

This can be detrimental to cub survival in the ski area because one male can find more females with COY per hour than he can outside the ski area. Adult males (older than three years) will attempt to kill cubs, to create more single females and thus, more potential breeding partners that season. Competition between males is high.

What I think is happening, or rather what I'm trying to determine, is that the male bear population is getting younger as the dominant dads die off. There seems to be less aggression (or less successful physical aggression) toward mothers when more dominant "dads" are present, as seen in the first decade of bear study and increasing aggression toward mothers when younger males begin competing heavily to become fathers.

Following 2013's bumper berry crop, and because mothers lost six of 12 cubs bumping two more females onto this year's mom cycle, at least 11 adult females are expected to emerge with cubs this spring in the ski area.

Some resident mothers and their expected 2014 status (emerging with cubs or yearlings) are — from oldest to youngest — Marisa (one yearling), Alice (cubs), Daisy (one yearling), Rosie (cubs), Lucy (cubs), Olivia (cubs), Bella (cubs), Amy (one yearling), Elly (two yearlings), Michelle (cubs), Mia (one yearling), Chanel (cubs), and Dixie (cubs). Bears are given numbers and most are named because I do over 300 presentations each year and if I tried to describe the relationships between these bears using their numbers, many people (including me) would get confused pretty fast. People seem to remember names better than numbers.

This is my 21st year studying Whistler bears... as a hobby. From April-October, I work as a ski area bear viewing guide and provide bear lectures for visitors and students. After Whistler, I study the nocturnal fishing behaviors of at least 10 black bears along the Cheakamus/Squamish Rivers and through winter, camera-trap bobcats and any active bears. I can be reached at mikebear@look.ca.