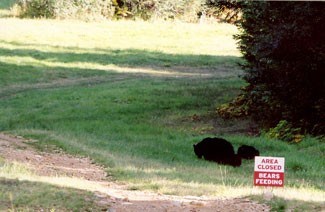 Her son, at 55 kg, slumps over some exposed roots of a struggling western hemlock, his black nose shoved into the dried coarse moss sniffing at the substrate hoping to eradicate the season’s last carpenter ant.

Her daughter, Juniper, at 51 kg, sits promptly at her mom’s side watching, refusing the possibility of leaving her mom and remembering summer’s bad experience. From Aug. 21 to Sept.1 Juniper became separated from her mother and brother. For 11 days Jeanie and son continued along their forays of berry and ant feeding. On Sept. 1 the family was located reunited within Jeanie’s familiar circuit of feeding.

Despite the fact the cubs are 5-8 kg underweight they are visually some of the healthiest cubs in Whistler this fall.

Temperatures climb into the mid-20s. For Oct. 1 that’s hot, and for starving stressed-out bears it adds to the nightmare. So at the start to this beautiful sunny weekend, where business is booming and people are out and about enjoying Whistler’s pristine setting, three bears huddle into the fragmented sliver of second growth cover and wait. But wait for what? A break in the crowds, a magical food source to appear, the cover of darkness?

In a good fall, bears would feel fat by mid-October, begin moving to and preparing dens in the last two weeks of October and enter dens during November at the onset of snowfall. This year, continuous sunny days with high temperatures from May to July ripened the berries so quickly that berries at sub-alpine elevations were ripening the same time berries were ripening at mid-mountain. This near synchronicity of berry ripening at different elevations produced a full berry crop during three-four weeks. During August every berry in Whistler was available to bears from valley bottom to the high alpine. Continued hot weather shrivelled valley to mid-mountain berries, forcing bears into higher elevations to consume the final and most important portion of the crop.

During extremely hot summers I am finding that traditional berry producing habitats at south and southwest facing slopes are no longer productive. These slopes are exposed too long to solar influence and berry plants are stressing and taking away nutrients from fruits to keep the shrub alive. Berry-producing shrubs at north and east-facing slopes are the most productive due to shorter exposures during sunny, hot days. Longer cooling periods help the berry shrub recover and maintain equilibrium.

During August bear-berry feeding activity reached the highest count in nine years of monitoring on the north slope of Whistler Mountain. In approximately six-square kilometres of concentrated timber-shrub and open shrub habitat, 36 different black bears were identified from Aug. 1 to 31. The Green Acres Family Ski Zone centred within the Emerald-Harmony ski trails is the most important, critical open shrub field-berry feeding region in the Whistler-Blackcomb ski area. Development or habitat degradation at any level would jeopardize the critical summer-fall berry feeding source, displacing many bears.

The berry-bear situation was monitored closely this year thanks to the Whistler-Blackcomb bear viewing program. Over 600 hours (up to six hours/day) were spent systematically recording observations of berry abundance and bear identification and activity.

The ski area attracts and supports its own sub-population of bears, with seasonal movements across its mountain boundaries and into Whistler valley.

The prediction and education of this berry supply shortfall during early September was made possible because of this program. It’s vital to have the ski area functioning as a window into the bear’s dynamic ecosystem. Knowledge of bear activity trends in the ski area helps with inferences on resort-wide trends in bear population.

By early September the massive daily berry foraging came to an end. Bears spent early September foraging scattered berries. By the start of the second week there were not enough berries at high elevations to support bear activity. Bears began descending to the valley to look for domestic fruits and berries and human food.

How bears respond to a food shortage of such severity is new to my 11 years of research in Whistler. I cannot predict this outcome or how far bears will push their behaviours to secure sufficient fat stores for winter. So far, bears are responding in three different ways: 1) by remaining in the ski area and reverting back to their spring diets of grass, clover, horsetail and opportunistic carpenter ants; 2) by moving into Whistler valley and searching for domestic fruits/berries (i.e. rosehips), and human food; and 3) by likely expanding their movements from familiar fall feeding areas in search of food throughout the outer limits of their home ranges and further.

This is when radio telemetry has its crucial advantage. Numerous black bear studies in North America have documented bears moving hundreds of kilometres in search of foods and in homing after relocation. This fall some bears have seemingly disappeared. I often wonder, do large adult males leave Whistler to fish for spawning salmon in Squamish or Pemberton? I did once track and observe a large Whistler adult male at the Squamish landfill.

It’s interesting to see the differences in behavioural response to this natural food shortage by neighbouring bears under the same (or so it would seem) influence of experience and human habituation. How bears can graze 10-12 hours a day some 500-metres from human food sources and not attempt to seek garbage is evidence that bears can be habituated to people and their activities, yet not break the boundary of human food seeking behaviours.

Adult female Katie, who is also resident to the north side of Whistler Mountain, grazes every day between 800 and 1,400 metres elevation on ski trails. She grazes at higher slopes during the day to avoid bikers, only to return to lower slopes in the evening. In the 10 years I have monitored Katie I have never observed her to use human food other than curiously nosing through a plastic bottle beneath a gondola.

Marisa, another dominant female on Blackcomb Mountain has also never been observed feeding on human food while grazing every day some 500-metres away from Base II operations.

Many offspring of resident ski area mothers are remaining in the ski area to graze the second fall growth of lush new green vegetation. Some yearlings are grazing very close to people and efforts are made to scare these bears higher onto the mountain.

In the ski area we have defined a boundary where grazing bears may safely feed. The ski area is closed to the public above the red and white "Area Closed" signs. If bears drop below we chase them back up. The bottom of Blackcomb has had 14 different bears grazing. One adult female is injured and favouring her right forepaw. She is feeding and drinking and being monitored. Bear space should be tolerated above Base II elevations because this is the only semi-natural food that remains. Bears are nutritionally stressed. Please do not approach them for photographs on foot or by ATV.

So what of Jeanie and her cubs? Here is a highly dominant and successful mother bear who unfortunately won’t take no (to no berries) for an answer. Jeanie is operating on the sheer maternal drive to prepare her two cubs for winter. She is not a garbage bear. She spends 99 per cent of her time in the ski area and unfortunately has been displaced by the mountain bike park. She responds to a natural food shortage by coming down to the valley garbage sheds and tearing them apart. It’s no different than ant feeding – tearing rotten logs apart – except that she does not enjoy putting herself or cubs at risk. Therein lies the problem; it’s not in the bear. A bear like Jeanie in the Whistler ecosystem is important – she’s a barometer – if we lose her we have definitely failed.

During October and November, expect high bear activity regardless of weather. Bears are hungry and snowfall in the past has not forced them into dens when underweight. An early snowfall would certainly help but won’t solve the problem. Expect bears anywhere at anytime.

Dispose of human food garbage and other odorous attractants immediately. Do not leave pet food or feed birds outside. Tolerate bears grazing but aggressively chase them away if they are approaching buildings, cars, or garbage bins. Always give a bear lots of escape room preferably near to the closest shrub/tree cover. Only use dogs on leash. Please do not approach bears anywhere for any reason.