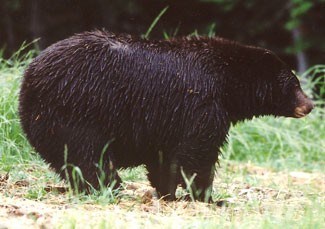 The large silhouette lumbers along the ridge filled with metre-high shrubs. Late summer twilight brings the female black bear down the ridge from a full day’s feeding. A sea of black cloud chokes the horizon promising rain. She recognizes the familiar but changing odor of increased humidity and dropping atmospheric pressure.

She drops off the ridge, crossing a pile of intertwined wind-throw. The leaning-to-horizontal trees that lost their lives to the surges of 70-km/h winds now form a bundled maze that she easily navigates, padding along their surface and slumping beneath the last, nearly straight, yellow cedar. She’s brought to a halt by a luring scent. She turns and walks along the logs, sniffing their surface of peeling bark, halts and reverses, scents, stops again and rears up to scent an upright trunk. She drops to all fours, swings around, then back tracks to the scent’s focal point.

She locates the source of the powerful sweet scent at the base of a dead tree protruding from the downed timber. The scent is intoxicating. She gently inserts two claws from her right forepaw into a small 2-cm wide opening and pulls back through a mixture of decayed wood and matted conifer needles. She has to be quick. Her snout thrusts into the cross-section of honeycomb, canines ripping away a sticky chunk of honey and larvae. Bees fight the lethargic magnet of cooler temperatures to fend off the massive intruder. The female bear knows she has the advantage (in cooler weather) and completely consumes the subterranean matrix of carbohydrate and protein.

Back on course, she shakes off a few stings to her snout and paws.

Night swallows any trace of light and she navigates by the smell and memory of the terrain. For 14 years she has traversed these habitats building a database of seasonal food sources, daybeds, travel routes, and winter dens. Every year she adds to the complexity of knowledge with the reality that seasonal foods may not be plentiful.

Her small annual home range of 40-km 2 reflects diversity and richness but may double in size in response to natural fall food shortages. Her life, its trials and outcomes, formulate the strategies for survival.

She instinctively slows at a familiar berry patch. The sweetness of plentiful berries draws her snout into the foliage. Protruding lips nibble off 10 large berries. Juices flood her senses, triggering a frenzied consumption, but she is tired. In the last 17 hours she has foraged 5-km 2 of concentrated berry habitat, consuming over 120,000 berries.

She relaxes on her haunches and pants. Her rump is full and the fat layers continue to build from massive overdoses of sugar and non-sugar carbohydrates. She has gained 40-kg since berry ripening two months ago.

Before continuing she hesitates again, leans back slightly and defecates. A large purple pile containing thousands of wet berry seeds dispersed through her daily movements expand the crucial variable of her biology.

The female bear’s trail ends at the top of a timbered outcrop. She hesitates, panting and scenting. Satisfied with security, she descends through leaning trees and large moss-covered rocks. She tucks into a contoured bench between two large mountain hemlock trees at the base of the outcrop. Old scat piles line the periphery of the bed indicating several days’ use.

She stands at the edge once again raising her snout – pumping and filtering the nocturnal trails of mountain slope aroma – mouth opening and closing to increase molecules of odor across her large nasal passage. She recognizes a familiar, but distant scent: a male somewhere at a distance across slope from her daybed. She is unconcerned.

Knowing her ties with adult males are over she relaxes and sits on her haunches in the depression of her daybed. Her bed is roughly 120 cm long and 100 cm wide. She slumps against the base of the hemlock resting her head along the ridge of the bed and half extending her four legs outward. Several short breaths trigger a large sigh releasing a heavy abdomen, rump, and muscled frame into the contours of the daybed. Her eyes close. Insignificant sounds and scents attempt to trigger eye opening and nostrils but fatigue soon muffles her senses and commands sleep. Her respiration rate falls below 10 breaths per minute as she surrenders coherent thoughts to mountain dreams in the realm of a well-placed daybed.

The thoughts and actions of Jeanie , the dominant resident female black bear on the north slope of Whistler Mountain have been observed and interpreted through 12 years of field observation. Jeanie is part of a focal group of animals that I observe annually to determine the life history of female black bears. Next week’s column will illustrate the spatial relationship of berry foraging amongst four female bears in the ski area.