Alpha-male Rock (left with ear tag) and Beta-male Slumber are rivals for this spring's 10 potential breeding females in the Whistler-Blackcomb ski area.
Jun 15, 2007 2:57 AM By: Michael Allen 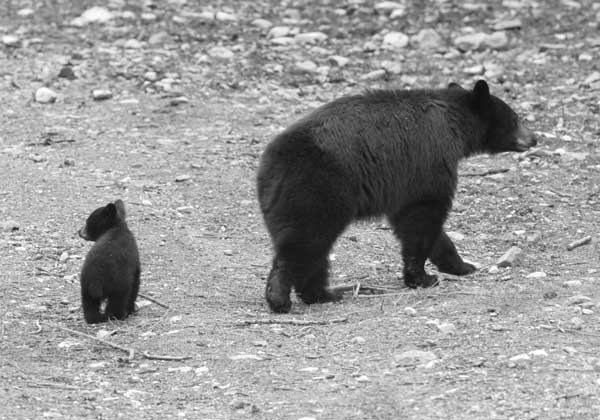 Alpha-male Rock (left with ear tag) and Beta-male Slumber are rivals for this spring's 10 potential breeding females in the Whistler-Blackcomb ski area. Males have begun moving through female activity areas hoping to encourage mothers to break-up with yearlings (18-month old cubs). Slumber, named for his passive personality, begins the year at the Chateau Golf Course then moves up into Blackcomb and sometimes Whistler ski areas. Rock is named for his solid rock-like defense against a physical attack from Slim (who died in 2004) in 2002 when Slim literally bounced off of Rock's body. Rock has pursued Slumber, chasing him from grazing areas near potential mates. Mating follows family break-up beginning late May through mid-July while peaking in June.

Cassie's 18-month-old son bites off the top branch in a Cottonwood tree to feed on catkins. All black bears will climb Cottonwoods for feeding. Larger bears will climb as high as the tree will support them, bite off branches and let them fall to the ground where they can feed safely. Bears have also begun foraging concentrations of carpenter ants by tearing apart rotten logs and tree stumps. Ants, bees, larvae, and honeycomb supply protein and carbohydrates to bears during late spring and summer before berries ripen.

First-time mom Juniper emerges this spring with a single black cub. Juniper was born to resident mother Jeanie in 2004. She has produced a cub at 3 years old, the youngest mother I have seen during the last 14 years. She was observed last spring mating (at 2 years old) with three males — Blackie, Max, and Kit-kat. Females usually mate at 4 and have their first litter at 5. In comparison, Brownie and Elly both have mated for the last two years (2004-05) but have failed to produce cubs until now, with three cubs each for their first-time litters. Mothers with cubs-of-the-year (born January 2007) do not mate and will push males away as some males may attempt to kill cubs to force a mother back into estrus. Mothers are good protectors but May-July is a stressful period. The 2006 survival rate for 26 cubs was 85 per cent.

Bears are observed, identified, and photographed by Mike Allen as part of the Whistler Bear Identity Project (WBID 2007). For questions or bear family sightings call 698-6709 or e-mail mallen_coastbear@direct.ca