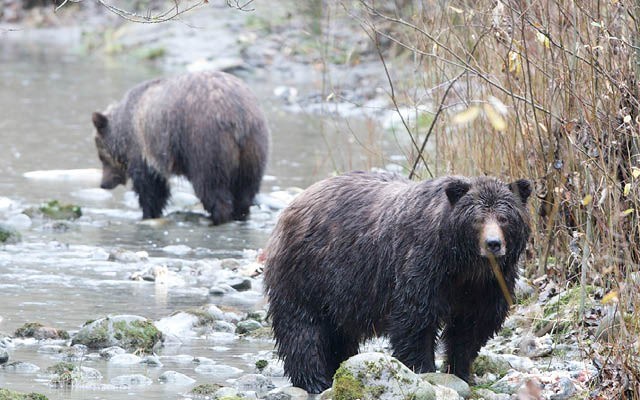 caught on camera A well-fed mother grizzly along the Squamish River, with one of two, two-year-old cubs. The bear family's activities were followed for 55 days using high-quality remote cameras. photo courtesy michael allen

As rain continues to fall, the 22-month old female grizzly bear cub pins a four-kilogram chum salmon against the slippery round rocks of a creek tributary.

The heavy droplets from endless wet days slide down off the top of the bear's head along the blonde tips of her grizzled guard hairs. The fish wriggles its 80-centimetre length beneath the cub's 10-cm wide forepaw, her claws digging in. Multiple bites to the belly where less muscle exists helps her gain access to the heart and liver, but the salmon continues to thrash. She pushes down hard with her left forepaw. Using the middle two claws from her right forepaw she surgically picks, picks, picks at the large eye of the fish, popping it lose and slurping it up. She flips the salmon over and detaches and consumes the other eye in the same manner.

Suddenly, she steps off the salmon into a narrowing section of the stream just as another salmon is swimming down through this bottleneck. The fish tries to go around but, the cub is quick and jabs with its snout into the water clamping down along the fish's dorsal edge. The large slippery body thrashes into the night air as the cub hoists it out of the water... but not too far... just enough to drop it onto the rocks away from the salmon's rushing-water escape.

She pins it, biting aggressively into the belly posterior to the pectoral fin, releases it, and lunges again head first into the stream.

Four fish swim downstream towards her, her head sways back and forth and she lunges slapping both forepaws through the current — she misses. She turns downstream watching where the salmon went, hears a splash and whips around into a fish head on.

Within three seconds she has the female chum salmon in her jaws. The grizzly cub takes four steps up onto the rocks, biting at the salmon's dorsal edge. Though she has caught four fish in four minutes, the female grizzly cub is not content. She throws her body into the stream, almost head first into a larger chum salmon swimming downstream. The fish launches into the air but, she bites at its body pushing it through the water and pinning it to the streambed with both forepaws.

Swiftly submerging her rostrum, she clamps down and raises a 90-cm long, 5-kg, male chum salmon. She can't hold it long and her body rocks wildly, back and forth in rhythm with the salmon's thrashing, forcing her to drop it onto the wet rocks where she begins to bite frantically along the back behind its gill cover.

With the fish now wriggling and thrashing on the rocks she goes back and forth poking and sniffing, then settles on licking up the eggs of a smaller female chum. From behind, another cub approaches from upstream and pins one of his sister's catch and begins biting into it.

Four metres to the side of the channel a small, high-resolution video camera has filmed the entire event.

Suddenly, both cubs hesitate, looking upstream at a much larger grizzly bear walking downstream through a deeper pool. Their mother's robust shape gives way to two massive humps... her shoulder muscle becoming layered in fat and the larger rounded rump. The daughter's fishing success was not hers alone as her mother was upstream stirring up chum that were holding in a deeper pool forcing the salmon downstream in a series of waves toward the waiting cub at the bottleneck.

Mom walks to the first fish caught by her daughter and with the left forepaw pins the head against the rocks and with her right, slices open the ventral line licking up roe then using large canine teeth biting in behind the head then pulling back and up stripping off 20 cm of oily skin. For the next 45 minutes the family settles in on the initial feeding of specific parts of at least 10 more salmon — their roe, skin, head and the hearts and livers.

This mother grizzly is resident to the Squamish-Ashlu drainage and is in the second year of rearing these cubs. The family will den-up for winter, then mom will likely separate from the two-year-olds during the next breeding period in June 2017.

In 2015, I had three cameras that followed her fishing, digging daybeds, resting, and nursing cubs over 16 days, but this year, I've had up to six cameras recording the family's activities from Oct. 19 to Dec.12. During these 55 days, the cameras captured over 5,500 images and 600 videos... an incredible insight to their world.

Non-invasive cameras are motion triggered during the day and by infrared during night, meaning they are triggered to shoot or film when they detect a temperature different than the surroundings.

Mom is active mostly during diurnal and crepuscular periods — daytime and dusk/dawn.

Black bears fish mostly at night using the cover of darkness for stealth in fishing and security against human disturbance.

The chum run was the best I've seen in the last few years, but the Coho return so far looks poor in wilder streams. And during continuous days of subzero temperatures, dead or recently spent fish will become frozen solid, signalling bears that it's finally time for denning.

During the last days of chum by early December, the bear family would dig through silt/sand to find buried, unspoilt salmon carcasses, then later through snow to feed on semi-frozen fish.

On Dec. 12 at 12:50 p.m. they walked past the last camera and I followed their tracks for almost four kilometres, as they made their way off the valley floor into the mountains for denning. As of mid-December, I know of seven black bears still feeding on chum carcasses and looking for Coho.

Michael Allen's research is independent, self-funded, and conducted to help supply progressive information on Sea to Sky bear ecology for outreach to student, public, and professional series lectures. He will be presenting black bear and grizzly bear family fishing habits at the Brackendale Art Gallery on Jan. 29.