The warmer days releasing more green up have generated higher bear numbers over the last week, with 16 male and two female black bears identified throughout Whistler Valley.
May 8, 2009 8:01 AM By: Michael Allen 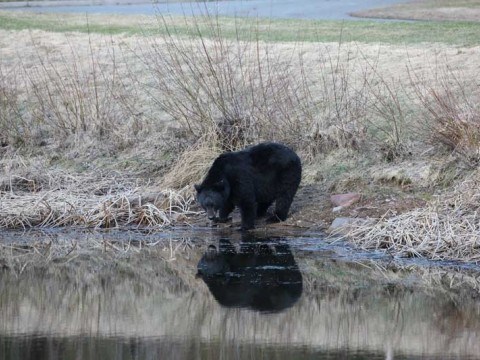 Whistler's recreational environs typically attract and support high numbers of bears because of the vast green-up of easily digested grass, horsetail, clover, and dandelions. Be cautious of bear grazing activity during morning and evening and on rainy days throughout wetlands, golf courses, roadside, parks, trails, and backyards.

Because male bears emerge first, it's mostly males active in April and early May. Only five large (275+ lbs.) males have been identified as of May 1, compared to 10 males in 2008. We did lose at least four large males in 2008 to conflicts/vehicle collisions, and at least three males are close to 20 years old.

I'm expecting a shift in breeding outcomes this spring because the age class of father bears should become wider to include younger, contending males. During the last eight years, a set of dominant males has always been most successful in "pairing off" with females, at the expense of younger males. The breeding period begins in mid- to late May with males scent-trailing females to establish potential mates. However, on May 4, I identified my earliest (versus May 19) courting pair involving a double-ear-tagged male and ski area resident Alice. Alice was due to produce cubs this year but has not.

Breeding peaks in June through early July and winds down through mid- to late July. Breeding pairs are photographed and their dates and behaviours recorded to determine potential parental-pairing and status/strategies of females.

In 2008, 21 adult females were identified in Whistler Valley with 76 per cent (16) resident to the Whistler Blackcomb ski area.

Three females (Katie, Zoe, and Elly) have reared offspring for 2.5 years instead of the normal 1.5 years. Katie has done it twice: 1997-1999 and 2006-2008. On May 4, Katie was observed without cubs and showed no signs of lactation. That leaves 11 females to potentially emerge with cubs.

This reproductive synchrony of 13 females means that they all bred in 2008 and if successful (sufficient weight gain from berry crop in 2008) could yield 13-26 cubs this year. With nearly 81 per cent of ski area females having cubs, this will reduce the number of potential girlfriends for males, because females mate in alternate years, avoiding males during their first spring with cubs.

If girlfriend numbers fall, boyfriend aggression will rise as potential fathers will try to kill cubs, forcing mothers back into breeding status about 10 days later. Mothers defend cubs fiercely, and most of the time successfully. This spring, aggression and stress could be very high for resident mothers.

What causes reproductive synchrony is consecutive seasons of natural food shortages (berries). Despite breeding in June, if pregnant females do not gain sufficient weight by denning, fertilized eggs that are suspended during 120 days of their 210 day gestation period will reabsorb instead of implant, forcing the female onto next year's cycle.

Bear activity will continue to increase each week as warmer spring weather melts snow, releasing more green-up. By June, I will confirm the number of bear families.

Questions or bear family sightings can be directed to mallen_coastbear@direct.ca or 604-698-6709.