Bearry controversy beats about the bush 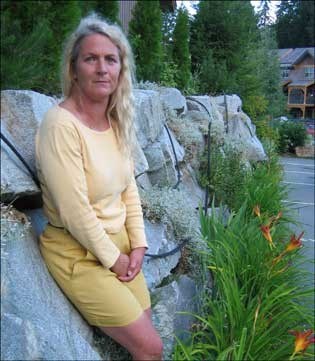 Alpine Meadows resident Heather Peebles is upset that landscaping crews ripped 50 raspberry bushes from beside her townhome in an effort to keep bears away from the family complex. Photo by Vivian Moreau

Heather Peebles was shocked when she went outside to pick some raspberries from beside her Alpine Meadows townhome two weeks ago. Fifty of the 55 bushes she had planted six years ago were gone. The bushes had been dug up by diligent landscaping crews intent on reducing plants that attract bears to the family-oriented townhome complex.

"I just can’t believe this would happen in a community that wants to bloom," she said.

Landscaping crews had not been instructed by the complex’s property managers to remove the canes but were complying with a resort-wide effort to reduce bear attractants, said the landscaping company’s owner.

"It wasn’t done with any malicious intent," said Rose Lynch of High Country Landscaping. "My crews had seen a bear walking up and down there (along the dike behind the complex) and it was just common sense to take the bushes out."

High Country has since offered to replace the plants, valued at $500.

Lynch maintains that removing the plants was the right thing.

"It was just something we thought we should do," she said. "We left the main crop by the front door but the others were growing right beside the dike into the parking lot on the way to the kids’ park."

Local conservation officers have been encouraging homeowners to remove berry bushes that attract black bears into populated areas. Under Ministry of Environment regulations, homeowners can be fined if they fail to remove bushes after being ordered to do so.

Alpine Meadows resident Betty Vogler has lived in Whistler for 30 years. An avid daily walker, she thinks the campaign to reduce berry bushes is ridiculous.

"Bears were here before we were and I think they should be left to their own devices," she said. "People should learn how to live with them."

Although there are no municipal bylaws about removing established berry bushes, there is a policy for new developments about what not to plant.

"Because landscape plans for developments come through municipal hall we would then say don’t plant that," said communications officer Diana Waltmann.

Peebles said she will not re-plant raspberry bushes High Country is replacing, but will instead donate them to Mount Currie and Squamish First Nations communities.