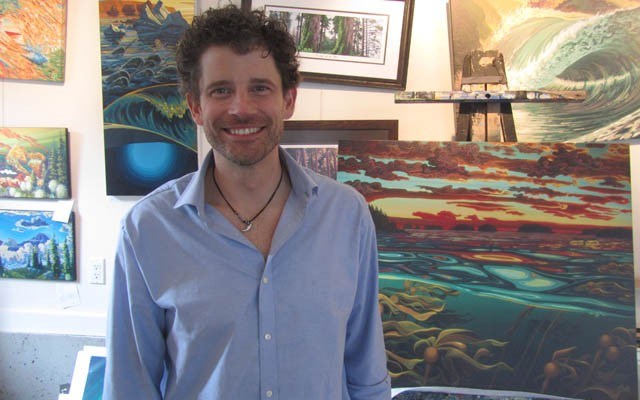 Whistler is mourning the loss of renowned artist Chili Thom who passed away Nov. 30 after battlng cancer.

“Chili was instrumental in the development of arts and culture in Whistler,” said Heather Paul, chair of the Arts Whistler board in a release.

“He was a brilliant painter and an unwavering advocate for our community’s artists. For almost two decades Chili was an active member of Arts Whistler, including bringing the artists’ perspective to the table by serving on the board of directors. But even more importantly, Chili was someone who encouraged others to be all they could be.”

Thom lived a life without limits. In addition to being a successful, and largely self-taught painter, he was also a talented DJ, a passionate backcountry guide, and an innovative filmmaker.

Next summer Thom’s art will be the focus of a special exhibition covering his life and career at the Audain Art Museum.

Thom, who had been suffering from cancer for over a year, passed away in hospital surrounded by friends and family.

Pique will run a tribute to his life online and in the Dec. 8 issue.

Thom was known for his curvy and colourful landscapes and seascapes and was named not only Whistler's favourite artist in Pique's Best of Whistler poll for the 13th time in 2015, but is also also the favourite Whistlerite for 2016.

"I would be absolutely honoured to have a show in Whistler! It would be an honour and a pleasure to show my favourite pieces in my favourite place," said Thom in an Arts Whistler release on Nov. 29.

The show is a collaboration between the Audain and Arts Whistler.

The Audain's executive director Suzanne Greening says the exhibition will run for three weeks next June in the upstairs temporary exhibition space.

"We're pleased to provide a space to have this exhibition celebrating Chili Thom's work and his life," she says.

A committee composed of Thom's friends, along with representatives from the Audain and Arts Whistler, will organize the show.

Paul said the Audain has been "incredible.”

"It took no time for them to bridge the community spirit that is making this happen," Paul said.

"They are definitely reflecting themselves as an extension of this community by agreeing to do it."

She added that more information on the show will be announced in due time and to watch the Arts Whistler website for more details (www.artswhistler.com).

Whistler and other Sea to Sky RCMP detachments resuming front-counter service
Jul 10, 2020 9:52 AM
Comments
We welcome your feedback and encourage you to share your thoughts. We ask that you be respectful of others and their points of view, refrain from personal attacks and stay on topic. To learn about our commenting policies and how we moderate, please read our Community Guidelines.