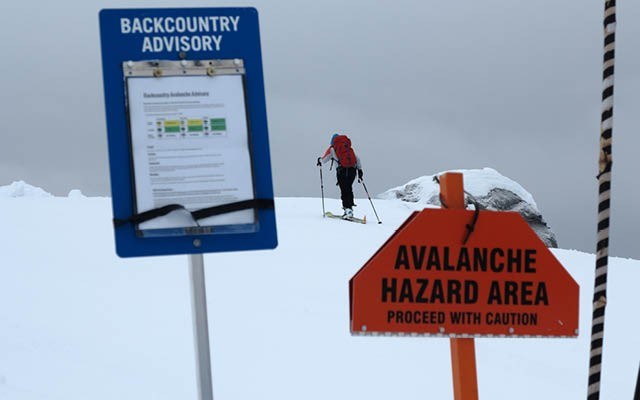 OUT OF BOUNDS Skier venturing beyond resort boundaries are the subject of a behavioural investigation into backcountry safety. Photo by Vince Shuley

With Avalanche Awareness Days now in Whistler's rear-view mirror, the hope of the Canadian Avalanche Centre (CAC) is that people will take future steps to avoid the dangers of the backcountry.

"In part we're sounding like a broken record because there's still a need for simple things that can make a big difference," said Ilya Storm, public avalanche warning service coordinator at the CAC.

"There's reasons to believe that there's still a huge number of people who travel without a transceiver, shovel and probe. We have to continue with that message, just like Mothers Against Drunk Drivers continue with their message, because we haven't stopped drinking and driving for some reason."

But one Whistler-based researcher is asking the question: Is building awareness the most effective way to reduce avalanche fatalities?

Randi Kruse is a consultant investigating the unequipped, untrained resort skiers journeying beyond boundaries, through the method of social marketing (not to be confused with social media marketing).

"The idea with social marketing is you take all the principles of commercial marketing and apply it to a social problem," said Kruse.

"Commercial marketing in the private sector is good at having a laser focus in all their communications, in order to reach their target audience. Non-profits, and even local governments, take a very broad approach to their communications and generally do a public education or awareness-style campaign."

The campaign Kruse is currently developing is one element of Project Zero, an initiative undertaken by the American Institute for Avalanche Research and Education (AIARE) to reduce the number of avalanche fatalities in the U.S. to zero by the year 2025. The program has the support of numerous not-for-profit organizations in the U.S. including the Utah Avalanche Center, the National Ski Areas Association (NSAA) and Snowsports Industry America (SIA). The CAC has joined the initiative to contribute to Project Zero's mission in Canada.

For her baseline data, Kruse has pored through 10 years worth of literature from the annual International Snow Science Workshop (ISSW) in search of investigations relating to behavioural trends and has also brought in Swiss-Canadian avalanche researcher Pascal Haegli as an adviser on the project. Kruse is looking to interview powder-savvy skiers and snowboarders in an informal, roundtable setting to delve into why they behave towards avalanche risk the way they do. All interviewees will be resort riders who regularly duck boundary ropes or hike to areas with fresh snow – without avalanche tools or education.

"They're not perceiving that where they're heading to is actually backcountry, they're seeing it as just a little past the resort, so probably 'safe enough,'" said Kruse.

"Once we understand what barriers are there, why they don't have the training and the tools to be safe in avalanche terrain, then we can be way more effective in developing a marketing campaign to reach them. It might be a contest, it might involve user-generated video content, anything we can do to really model the behaviour we want to see. What we want to avoid is another broadcast education message and really look more towards peer-to-peer influence. We'll really be looking for support from people who are already following avalanche information and acting on that information to help be the messengers on that campaign."

Snowsports marketing relies heavily on "celebrity" influence, with brands using high profile athletes to showcase their products. But Kruse is convinced the role models need to be people already in the social circles of the project's target group.

"People often go after celebrities to endorse their products and I think there is a place for that," she said.

"But as a tool to build momentum for a new norm — such as checking avalanche bulletins — you need people who (are) just like you to talk about it. The people who really influence your decisions are your friends. "

The first instalment of this marketing campaign — yet to be named — is scheduled to be released this season, but it will be an incremental step towards achieving Project Zero. Just as wearing helmets has taken years to become socially acceptable in snowsports, the road to having zero avalanche deaths will be a long one.

"Social transformation is not the kind of thing that happens overnight, we really need to stay with this and understand the communications challenge from many different perspectives," said Kruse.

"These things are slow in coming and it can be years before you see a shift. In order to measure success you have to take a long term view."

The boundary skier focus group will be held on the evening of Monday, Jan. 27 in Function Junction. To register, email info@avalanche.ca with "powder hound" in the subject line. If selected for the focus group you will be notified of the of the venue location and meeting time.