An Evening Score Researcheres with the Whistler Biodiversity Project recently found a rare bat, the Keen’s Myotis, in the resort municipality. Photo by Bob Brett
Sep 3, 2010 8:21 AM By: Bob Brett 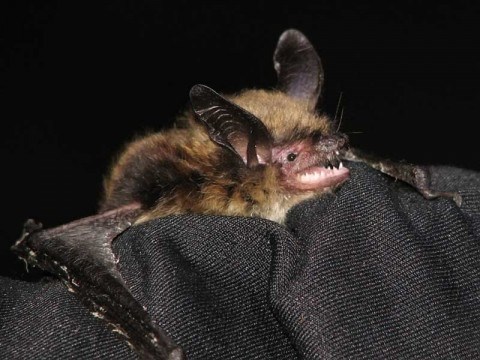 Although actually a little bat, it is nonetheless very big bat news. For the first time in Whistler since 1944, bat researchers with the Whistler Biodiversity Project have found Keen's Myotis ( Myotis keenii ), a rare bat which is not only difficult to locate but also difficult to conclusively identify.

Past records from various sources show 10 different species of bats in Whistler. We wanted to know if that list was: (a) accurate; and (b) current. Accuracy is important because differentiating bat species requires skilled researchers and specialized equipment. And even if past identifications were accurate, we still wanted to know whether 70 years of logging and urban development had changed habitats enough to lose (or gain) species.

Keen's Myotis was our highest priority species for three reasons. First, it is one of the rarest bat species known or suspected in Whistler (it's on the B.C. Government's red list). Second, the last known records were from long ago: one from Ken Racey in 1941 and the second from his son-in-law Ian McTaggart-Cowan in 1944 (both specimens are at the Royal B.C. Museum). And third, its tendency to avoid developed areas meant it might not still be here.

Distinguishing Keen's Myotis from the more common Long-eared Myotis ( Myotis evotis ) is challenging. The only accepted method in the past was to compare skull characteristics. Not surprisingly, bats did not enjoy (or survive) this approach.

Current methods have evolved to be accurate without harming bats. A small skin sample from the wing is enough to identify species through their DNA. And an experienced researcher like Dr. Laussen can positively identify many Keen's Myotis in the field by a combination of diagnostic features such as colouration and heel shape.

Well-equipped with Dr. Lausen's knowledge, a keen team of batters, plus lots of nets and other specialized equipment, we set off into the night.

The first night was a complete shut-out. It started with drizzle and a few bats flying above our nets and ended in a complete downpour. Final score: four soaked researchers, zero bats. The second night we netted over the River of Golden Dreams at the base of Lorimer Road and caught almost 20 Little Brown Myotis and slightly smaller Yuma Myotis. Dr. Lausen was also able to identify a high-flying Silver-haired Bat from the sound and waveform of its echolocation, recorded by a specialized bat detector.

The last night we set up 11 nets just before dusk and crossed our fingers. Within one hour we had our first long-eared bat, and our spidey (batty?) senses tingled. An hour later we had positive confirmation from Dr. Lausen that it was indeed a female Keen's.

Not only that, it had recently weaned pups which meant it had reproduced. By the end of the night we'd netted a California Myotis, a second post-lactating Keen's, plus a third long-eared bat with intermediate characteristics that will likely prove after DNA analysis to be a Long-eared Myotis.

We finished at 4:30 a.m., tired but pumped with excitement. We'd met our goal of finding Keen's Myotis and also confirmed another four (maybe five) species from the list. Dr. Laussen believes the Keen's Myotis record might be the closest to urban development yet documented. Luckily Whistler still has a bit of natural forest left in the valley bottom (which is where we found the Keen's) and this result is a reminder of its value.

There's still more to do with bat conservation in Whistler. We need to expand surveys to better describe which bats occur where in Whistler. We need to prioritize habitats they require for roosting and foraging. And we can also help provide habitat within developed areas by providing bat boxes plus simple refinements to bridge and building design. To track further bat and other biodiversity news, visit www.whistlerbiodiversity.ca .