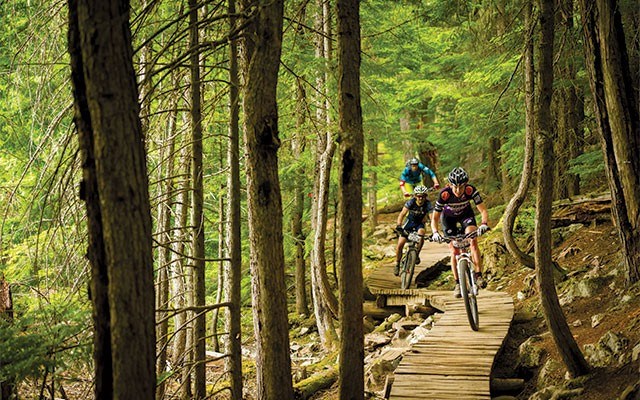 two-wheel spinoff A recent study shows people are travelling to Whistler not just for its infamous bike park, but increasingly to ride its legendary cross-country trails. PHOTO by mike crane / Courtesy of tourism whistler

Whistler has been getting "massive" bang for its buck when it comes to its annual investment in the local mountain-biking trails.

Backed with new data showing almost $59 million in economic activity attributed to mountain biking in Whistler, recent economic analysis has some community members asking: Does something need to give when it comes to the future of cross-country trail management in Whistler?

The recent analysis shows people are travelling to Whistler not just for its infamous bike park, but also specifically to ride its legendary cross-country trails, trails that have been built and maintained by volunteers through the Whistler Off Road Cycling Association (WORCA) for almost three decades.

"For the amount of money WORCA fundraises and puts in, in terms of volunteer effort..., the return on investment is massive," said WORCA's director of trails Todd Hellinga.

"I think moving forward it's not necessarily fair to ask a volunteer organization to be wholly responsible for that level of economic activity in the town. The town is probably going to have to look at supporting the club way beyond what we have over the past few years."

The Resort Municipality of Whistler (RMOW) has worked out an annual fee-for-service agreement with WORCA — $50,000 specifically for trail maintenance.

This, along with club dues and other grants and fundraising, brings WORCA's total annual investment in trails to roughly $100,000.

The study reveals that of the 533,348 riders last season, more than half were visitors to Whistler. Of those visitors, 136,879 came for the bike park while 159,579 were cross-country riders (96,000 using cross-country trails and 63,527 using the municipally-managed Lost Lake trails).

The ridership numbers didn't come as a surprise to Rob McSkimming, vice president of business development for Whistler Blackcomb. The numbers are tracked in the bike park every year. But it was interesting to see the economic spinoff, he said. The study also revealed just how important the cross-country trails are as a draw to Whistler.

"Both aspects of riding — both the bike park and the trails throughout the valley — are really important assets for the mountain-biking product that we have," said McSkimming.

"My feeling is that the numbers are big enough to be impressive at the provincial level as well as the municipal level."

The numbers speak for themselves: The total net economic activity, or GDP, generated by mountain biking in Whistler was: $46.8 million for Canada; $39.3 million for B.C. and $25.2 million for the RMOW.

Local MLA and Minister of the Environment Jordan Sturdy spoke to the importance of these kinds of studies, including the recent analysis of mountain biking in Squamish and Pemberton.

"There's no question, it's a growth industry and has the potential to be even more valuable going forward," he said.

"I think it does speak to the need to look to Master Development Plans for really all the communities from the North Shore right through Pemberton and beyond, so that we can coordinate these things."

Grant Lamont, long-standing advocate of mountain biking in Whistler who now represents the BC Mountain Bike Tourism Association, said the numbers are compelling as Whistler looks to the future.

"We basically have a $50-million resource that's being managed by volunteers," he said.

Hellinga said WORCA has seen the writing on the wall for several years. The organization would like to see funding for a trail manager, or a paid position that would oversee the nuts and bolts of the trail program — grant writing, authorizations, First Nations relationships and so on.

"That's probably the hardest part that we've come (across in the) past five years — just the level of work required to maintain a destination, resort-trail infrastructure," he said. "It's changed from (a local product) to being a tourism product. I think the community has known that but they haven't necessarily recognized that with increased funding and support."

Mountain bikers, he added, are just one of the users of this trail system. There are runners and hikers and racers also taking advantage of the trails.

"To us, (the study) reinforces that we're on track and the things that we're doing have a really big benefit," said Hellinga.

"Hopefully the rest of the community can recognize that and we can work together and leverage that to really keep on staying at the forefront of our recreation trail system."

Whistler's study was conducted by the Canadian Sport Tourism Alliance with support from Tourism Whistler, the RMOW, Whistler Blackcomb and WORCA.

The CSTA has also done studies on the North Shore, Squamish and Pemberton, using the same metrics as Whistler's study.

It will be releasing a corridor-wide study in the coming months.

"They'll put those together and get a full, more updated view, a 2016 view, of the value of mountain biking in the corridor," said Meredith Kunza, Tourism Whistler's senior manager of research and product development.

From a TW perspective, the Whistler study reveals interesting things about the mountain biking visitor — many are destination visitors, staying for multiple nights.

"They're all the things that fit Tourism Whistler's overall strategy for bringing the right type of person to Whistler. So it will help reinvest in those traveller segments," said Kunza.

The study also reveals just how important mountain biking is to the local community too.

In 2016, there were three separate studies for the Sea to Sky corridor looking at the economic impact in each community. The studies were conducted by the Canadian Sport Tourism Alliance.

The total net economic activity (GDP) generated by visitors to the Squamish trail system in 2016 was $8.8 million for Canada as a whole; $7.3 million for B.C. and $5 million for Squamish.

The total net economic activity (GDP) generated by mountain biking in Whistler was $46.8 million for Canada as a whole; $39.3 million for B.C. and $25.2 million for the Resort Municipality of Whistler.

The Crankworx numbers were calculated separately. The total net economic activity (GDP) generated by the 10-day mountain biking festival in 2015 was $16.1 million for Canada as a whole; $13.7 million for B.C. and $8.6 million for the RMOW.