BioBlitz heads to the alpine for 14th instalment 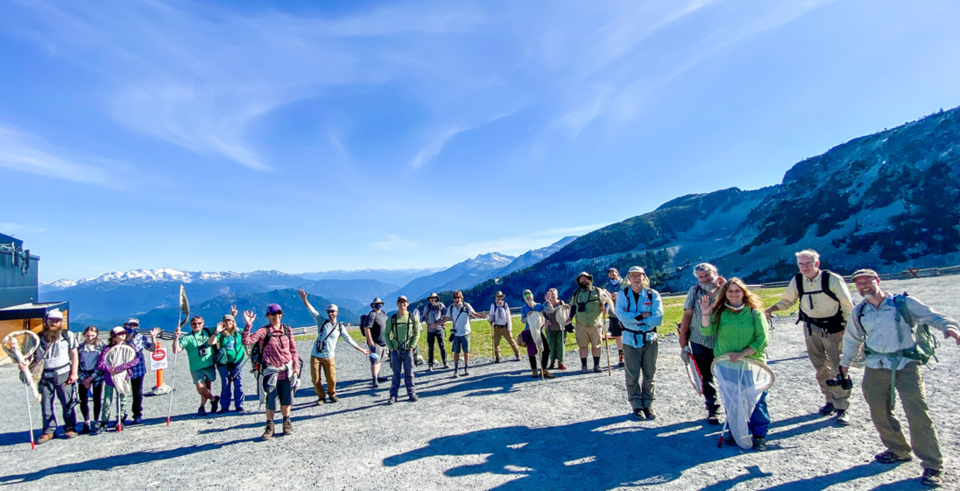 It may have gone down to the wire, but the 14th annual BioBlitz hosted by the Whistler Naturalists went ahead as planned last week, with more than 20 scientists descending on Whistler to count and catalogue flora and fauna in the alpine.

“We did a mini-blitz last year that was really well received, and we went to three different high-elevation areas … People wanted to do it again,” said ecologist Bob Brett, founder of the Whistler Biodiversity Project and co-organizer of BioBlitz.

“Really, we only solidified that we could do it about two weeks ago.”

The key thing was keeping scientists comfortable and safe amidst the ongoing COVID-19 pandemic, which required more vehicles than usual, Brett said.

“Once we got outside, that’s when everyone was happy. They didn’t need masks anymore, and got to enjoy the outside,” he said, adding that for a lot of the scientists, it was their first fieldwork of the year, which added to the excitement.

“It is always kind of comical because they get together with all their nets and various equipment and binoculars and all the things that make them stand out in a tourist crowd, but they had big smiles on their faces and they had a great time.”

Researchers scoured Blackcomb Mountain, Brandywine Meadows and near Birkenhead Peak, and while final numbers won’t be collated for some time, Brett estimated about 500 species were counted.

This year’s crop of scientists included specialists on invertebrates, vascular plants, birds and mammals, “but because of late cancellations or just unavailability, we didn’t have anyone doing lichens or mosses or mushrooms,” Brett added.

“It wasn’t a full representation, but given that two weeks ago we might not have had it at all, I think we’re all pretty happy.”

This year’s standouts for Brett, discovery-wise, were the butterwort plant—a carnivorous, bog species that has only been found in the Whistler area once before—and a rare species of dragonfly local researchers have been searching for for 15 years.

“It’s called a Black Petaltail, as in tulip petal, and its whole life is basically lived in the mud,” Brett explained, adding that it’s of interest because the wet, seepy areas it requires are common in the Whistler Valley (and often considered for development).

“It’s a reminder that those specialist habitats also have specialist species that require them,” he said.

BioBlitz has increased its focus on working with local students in recent years, 2020 being no exception, pandemic or not.

From June 15 to 17, the Whistler Naturalists had five BioBlitz scientists give virtual presentations to classes at Myrtle Philip and Spring Creek community schools.

“The format worked really well for these interesting times, with students watching live from classrooms and also from their homes. For one of the presentations, we had over 60 students tuning in from home!”

The Whistler Naturalists also created a two-part seed cone scavenger hunt video for schools and the community at large. Find it at whistlernaturalists.ca/seed-cone-scavenger-hunt.

Two virtual talks hosted by the Naturalists on June 25 are also online at whistlernaturalists.ca/lecture-series.

Now with 4,200 recorded species and counting, the annual BioBlitz event amounts to a puzzle that will likely never be fully solved—but that’s just fine for the researchers and lifelong learners involved.

“A lot of people like certainty and they like figuring out a puzzle and then never needing to figure it out again,” Brett said.

“I’d say the personality trait of the scientists that come up for BioBlitz and similar events, is that they love the idea that there’s always more to learn, and you can never find everything, but you just keep on going for that carrot and the carrot never comes closer.”