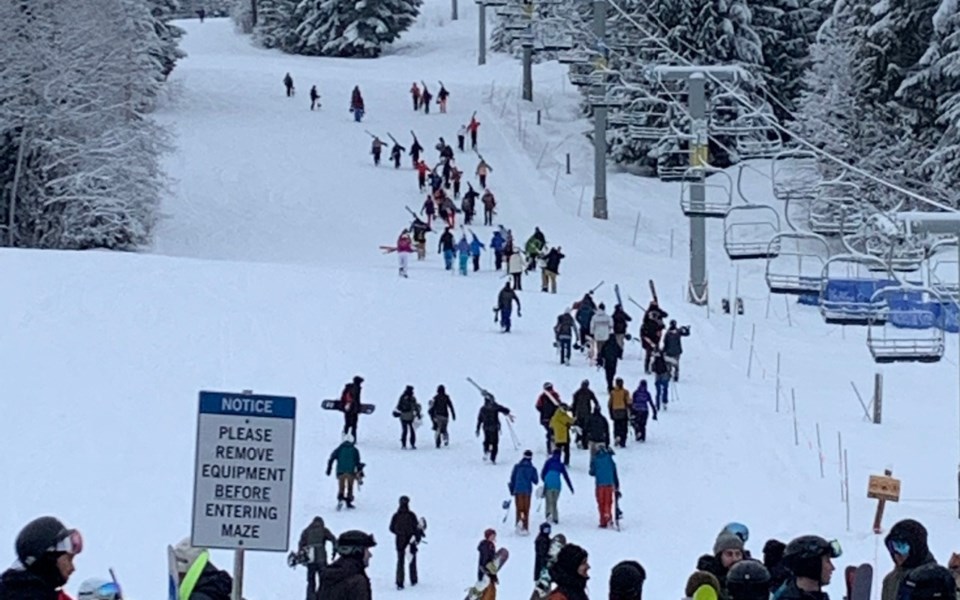 A delay in the opening of the Blackcomb Gondola led some early birds to walk up to the Excalibur Gondola on March 12. Richard Kinar

Some early birds looking for fresh tracks this morning had a rough start to their day after technical issues with Whistler Blackcomb's new marquee lift—the Blackcomb Gondola—led to a delayed opening.

According to Marc Riddell, head of communications for Whistler Blackcomb, staff was able to fix the issues and start loading guests by around 9:45 a.m.

With almost 30 centimetres of fresh powder in the last 24 hours, skiers and boarders had lined up as early as 6 a.m. in the Upper Village to get on the gondola.

The delay led some to take to social media to tell people about the delay.

"The Upper Village Gondola up Blackcomb has failed miserably," wrote one commentator on the Whistler Winter Facebook page. "Spread the word."

According to long-time Whistler Blackcomb pass holder Richard Kinar, there was a complete lack of communication surrounding the delay. "It was chaos," he said. "Nobody knew what was going on."

Kinar said that many began walking up to the Excalibur Gondola at around 8 a.m. when there were still no cabins on the line.

He said he is worried about international guests, who were left without a clue of what to do.

"The international guests were left not knowing what to do," said Kinar. "They didn't know how to get to town, and nobody from the mountain was advising them on how the buses worked ... Everybody was left to their own devices."