Squirrel gnawing on electrical system determined as cause
Nov 2, 2007 3:08 AM By: Claire Piech 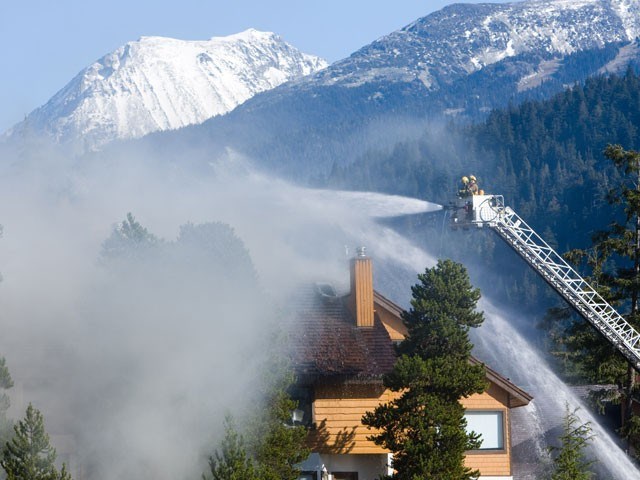 The fire started just before noon in unit 51 , working its way slowly through the other units until firefighters were able to put it out around 5 p.m.

“Heather (the caretaker) actually initially saw the flames coming out of the window, and she knocked on all the doors with our maintenance crew to make sure nobody was inside,” said property manager Scott Schober from Whistler Resort Management as he watched firefighters work to contain flames scorching units 47 to 52 on Friday.

Shortly after Heather Metzmer had alerted residents to the blaze, Whistler’s firefighters arrived and began dowsing the building from above with water. A total of six fire trucks and 35 firefighters attended the scene, along with an ambulance and the RCMP.

Melanie Clarance, a full-time resident in unit 47, watched her home of 12 years become the last unit to go up in flames. She described the fire going through her roof, “like fireworks, and then ash came down like 9/11.”

The Clarance family were the only full-time occupants who owned their unit. Two of the units had full-time resident renters, and the others were unoccupied. No one was injured in the fire.

According to Whistler’s Fire Chief Rob Whitton, Friday’s incident was caused by a squirrel who stripped the insulation off an electrical cable. He added that the squirrel most likely died in the act.

“The initial alarm came in for unit 51. The fire had gotten into the void spaces between the insulation and the shafting for the cedar shakes. And there is a lot of oxygen availability there, because the roofs are designed to breath to keep the shakes dry,” explained Whitton.

He added that the tarpaper used in the roof to keep rainwater out excreted flammable tar when it was heated, which contributed to the fire.

Once the fire got into the attic, it quickly spread from unit-to-unit along the top of the building.

Whitton said that while it is not common for rodents to cause house fires, it does happen occasionally.

“When people are constructing these types of buildings, they need to check the exterior just to make sure that any areas where rodents have the availability to enter are closed off or screened appropriately,” he said.

As a result of the blaze, all six units suffered extensive fire and water damage and will be unoccupied for at least the winter.

Schober said exact damage estimates are not yet known, but preliminary numbers rest around $3 million. He added that the whole roof system will have to be torn down and rebuilt.

“We’ve actually been able to go inside the units to see the damage now, and it is substantial. The top floors are all hit. Melanie’s was actually the least affected on the top, but the roof was still compromised,” he said.

Clarance said she heard Tuesday from the strata insurance agent that the whole building will probably be completely demolished and built again due to the extensive damage. She added that her family is desperately looking for a three- or four-bedroom house to rent for a year while repairs are done.

The Twin Lake’s fire is the second largest fire to strike Whistler in the past four months. A fire described as “suspicious” by Whistler Fire Rescue Services tore through a four-plex in Pinnacle Ridge mid-July, causing severe damage. The RCMP are currently investigating the case.

Last week’s fire was also the second blaze to occur in Twin Lakes Village in 20 years. In 1991, the complex opposite to Friday’s fire was damaged by flames after a resident accidentally left hot cinders in a paper bag before driving to Vancouver.

Whistler Emergency Social Services housed five of the tenants, including Clarance, over the weekend in the Delta Whistler Village Suites and the Executive Inn . They also provided groceries from Marketplace IGA and extra necessities from the WCSS Re-Use-It Centre. Victim Services also was on hand to support tenants.